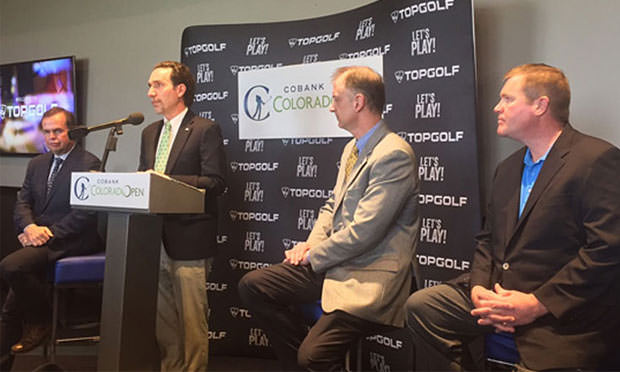 Agreement will conclude after 2020 championships.

The CoBank Colorado Open Championship is looking for a new title sponsor.

CoBank, one of the largest private providers of credit to the U.S. rural economy, has elected not to renew the five-year agreement that began in 2016 and will end after next year’s championships.

“While we’ve enjoyed being part of the Colorado Opens for the past four years, we decided after careful consideration to move in a different direction following the expiration of our current sponsorship agreement at the end of 2020,” Senior Vice President of Corporate Communications Arthur Hodges said. “We wish them the very best for the future.”

The announcement will end an eventful period in the 55-year-old event’s history.

CoBank succeeded HealthONE, which had title-sponsored the Colorado Opens for 12 years.

The increases made these events the richest state opens in the country.

In conjunction with the First Tee of Green Valley Ranch and The Broadmoor, CoBank in 2018 also sponsored the inaugural PEAK Performers Series, a nationwide First Tee event featuring Annika Sorenstam at The Broadmoor in which Nine First Tee kids (ages 14-18) from across the country got to meet and play with the female golfer with the most professional wins in history.

“CoBank was very happy how their money was spent,” Kevin Laura, the CEO of The First Tee of Green Valley Ranch and the CoBank Colorado Opens, said. “It became more of a community asset than a sports sponsorship asset.”

Laura indicated that the bank, which had previously sponsored some of the Colorado Open pro-ams, remains “interested in staying involved in some capacity.”

“CoBank certainly raised the bar, and we have no intention of downshifting,” Laura said when asked about the package he’ll present to prospective sponsors.

“We’re looking at the financial services, banking and health and wellness sectors,” he said. “The perfect fit is a company that’s looking to build or establish its brand as a leader in its category and in the community, a company that supports teaching kids the core values that are associated with The First Tee.”

CoBank was such a company, as was HealthONE before it. But, according to Laura, “advocacy is the biggest part.” CoBank CEO Bob Engel was the main advocate of the sponsorship, as was HealthONE CEO Jeff Dorsey. “They saw the value.” When both executives left their companies (Engel in 2017, Dorsey in 2012), the sponsorship and marketing strategies got reevaluated.

“Denver has a number of candidates” for title sponsors. Laura allowed. “We’re looking at business-to-business and business-to-consumer companies. The value proposition is most definitely there.”