Colorado Golf Hall of Fame Names Persons of the Year 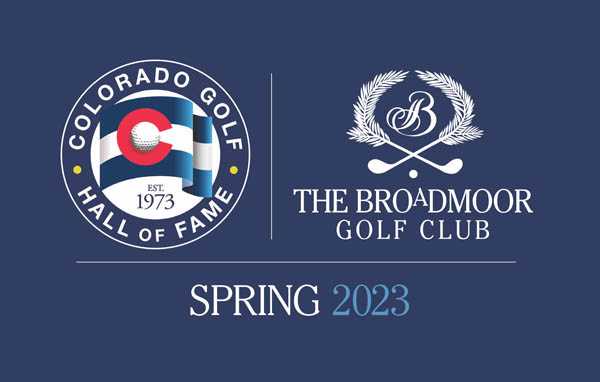 Over the course of the last year, the Colorado Golf Hall of Fame has been busily preparing to move to its new home at The Broadmoor, which is on schedule to open next spring. And a year from now, also at The Broadmoor, the organization will also celebrate its 50th anniversary with a grand gala on November 18.

It’s an exciting and unprecedented time for the Hall, and in keeping with that spirit, the organization elected to take the exciting, unprecedented step of not adding any new inductees.

“The emphasis next year is on our organization, our new home, our 147 inductees and the rich history of golf in Colorado,” explains Executive Committee member Gary Potter, a class of 2012 inductee. “We want the inductees to have ‘their’ night and not just be part of a bigger program.”

No New Inductees, but…

Not inducting new members, however, does not mean ignoring the incredible achievements of Colorado golfers in 2022—and they were many.

Among the annual awards the Hall of Fame presents are the Golf Person of the Year, which goes to someone who has distinguished himself or herself during the given year, and the Future Famer Award, which recognizes up to three junior golfers (at least one male and one female) for their accomplishments.

That said, the Hall’s board of directors decided for the first time in the organization’s history to name more than one Golf Person of the Year.

It named five—each of whom, on his or her own, would have made an unimpeachable selection.

In addition, because the eligibility window for Future Famer is small, the Hall named Maddy Bante and Kyle Leydon as Future Famers.

Currently a senior at Colorado State University—to which he transferred after two years at the University of Denver—the Westminster native has enjoyed an incredible 2022.

Jones swept the Colorado Golf Association men’s major championships—the Match Play and the Amateur—and was low amateur in the Inspirato Colorado Open, finishing third overall. The only others ever to accomplish that trifecta are Colorado Golf Hall of Famer Gary Longfellow (the 1974 Colorado Open’s outright winner) and 2021 CGHOF Person of the Year Colin Prater. Unlike either of them, however, Jones also set the Colorado Open amateur scoring record with a 19-under-par total.

Against an elite field at July’s Trans-Mississippi Amateur Championship, Jones forced a playoff with Pepperdine’s William Mouw, before losing on the second extra hole at Denver Country Club.

This marks the third Golf Person of the Year award for the former Jefferson Academy and Wake Forest University star, her first since turning professional in 2019.

In April, she broke through for her inaugural LPGA victory—and she made it a major, no less, at the Chevron Championship at Mission Hills Country Club in Rancho Mirage, Calif.

She then won the Meijer LPGA Classic in a playoff against her collegiate nemesis Leona Maguire and teamed up with Solheim Cup partner Lizette Salas to nail down the Dow Great Lakes Bay Invitational.

The only player on the LPGA Tour with three or more victories, she ranks sixth in the season-ending CME Globe Championship. The 60-player championship takes place this weekend at Tiburón Golf Club’s Gold Course in Naples, Fla. To date, she has earned $1,905,406 in 2022, seventh overall on the LPGA Tour.

This year, the 50-year-old senior rookie’s reward is for winning the prestigious U.S. Senior Women’s Open at the NCR Country Club outside Dayton, Ohio.

McGill, who never cashed a winner’s check despite earning $2,341,941 on the LPGA Tour, thus became only the third woman and fifth overall player with victories in three different USGA championships. The others are World Golf Hall of Famers Joanne Carner, Jack Nicklaus, Arnold Palmer, Carol Semple Thompson and Tiger Woods.

The win marked one of six top-10 finishes for the DP World Tour rookie, whose twin and fellow Buff Jeremy plays on the Korn Ferry Tour.  As of November 15 he ranks No. 141 in the Official World Golf Rankings.

At Twin Warriors Golf Club near Albuquerque, the 51-year-old PGA general manager at Erie’s Colorado National Golf Club won the national PGA Senior Professional Championship, dusting a field of 264. He joins Colorado Golf Hall of Famer Bill Loeffler, who won the championship in 2007, as the only Coloradans to capture the event.

He becomes the second family member honored by the Colorado Golf Hall of Fame. His daughter Hailey, now a junior at the University of Colorado, earned the inaugural Future Famer Award in 2018 while a student at Holy Family High School.

After an individual runner-up finish in 2021, the St. Mary’s Academy sophomore won the 3A girls state high school individual title as she led the Wildcats to their second consecutive 3A team championship. But for her, golf is about more than scoring.

This fall, as a junior, she earned the national USGA-AJGA Presidents’ Leadership Award, a national honor founded by the USGA and AJGA in 2005 “to further develop junior golfers through volunteerism.”

A member of the National Charity League, where she helped on a Joy International project and volunteered countless hours at The Food Bank of the Rockies, Bante volunteers with the First Tee—Colorado Rocky Mountains. She also fundraises, last year generating $14,680, which she split between the First Tee—Colorado Rocky Mountains and the American Junior Golf Association’s ACE (Achieving Competitive Excellence) Grant. This money will help provide scholarships for teenagers to go to college, free tuition for children to attend First Tee programs and allow young adults the opportunity to play in AJGA tournaments.

The Brighton High School senior won a junior major—the Colorado PGA Junior Invitational—in a playoff and finished first on the 2022 Colorado PGA’s boys junior golf points list. The First Tee of Green Valley Ranch member competed in the two First Tee National Championships, finishing as high as seventh place, and in 2021 he was selected by First Tee to participate in the PURE Insurance Championship, a PGA Tour Champions event at Pebble Beach in which he was paired with Colorado’s PGA Tour Champions player Shane Bertsch.

As with the opening of the new museum at The Broadmoor, which will take place in the spring of 2023, the Colorado Golf Hall of Fame has not set a fixed date for honoring the Golf Persons of the Year and the Future Famers.

In addition to the 50th Anniversary Gala on November 18, the Colorado Golf Hall of Fame will stage its annual golf tournament at The Broadmoor on July 6.

Visit coloradogolfhalloffame.org for details after November 30.