Kupcho Triumphs in Playoff in Michigan 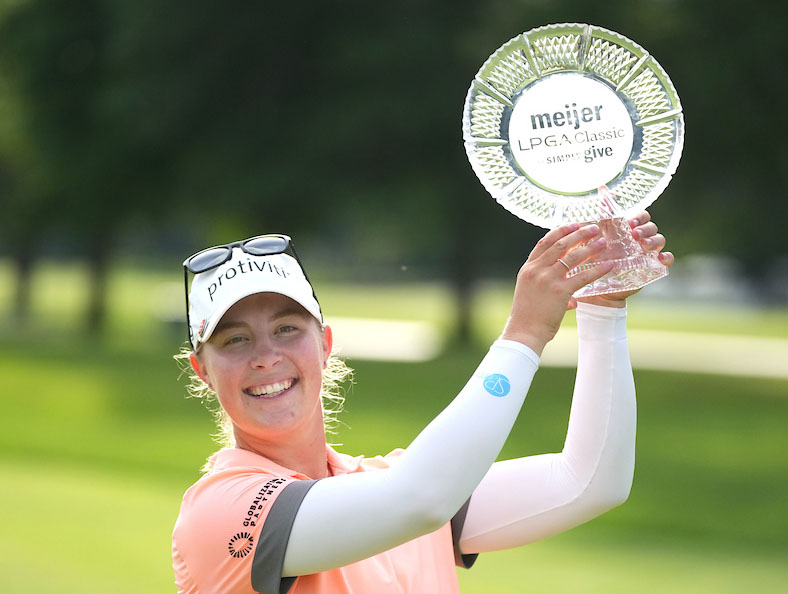 And she did it in dramatic fashion. At Blythefield Country Club in Belmont, Mich, the Colorado native defeated former ACC rival Leona Maguire and defending champion Nelly Korda on the second hole of a sudden death playoff.

Unlike her victory in the Chevron Classic, where she enjoyed a nice lead throughout the final round, Kupcho had to fight for every shot to keep pace in an intense final round.

She began the round in the final pairing one shot behind Korda, only to find herself three behind after the seventh hole. She then drained a long eagle putt at the 475-yard eighth hole, followed it with a birdie to go one ahead of Korda and tied with Lexi Thompson at the turn.

By then, Maguire, who started the final round seven shots off the lead, had pulled to within three, and after four birdies on the back nine, she was in the clubhouse at 18-under.

Korda would birdie 18 to tie her, while Kupcho, who also went into the final hole at 18-under, was thwarted by a tee shot that settled against the lip of a fairway bunker. She settled for a par and playoff.

On the first playoff hole—the par-5 18th—Kupcho stuck her second shot to three feet for an eagle putt that would have sealed the victory had she not slid said putt past the hole.

Maguire then missed her own three-footer on the second playoff hole, allowing Kupcho to capture the title, worth $375,000.

Kupcho showed incredible grit coming down the stretch—at one point, she, Thompson, Maguire and Korda were tied atop the leaderboard.

“I outplayed them I guess,” Kupcho said. “I hate to say that because they all are great players, but I controlled what I can control and that was my game.”