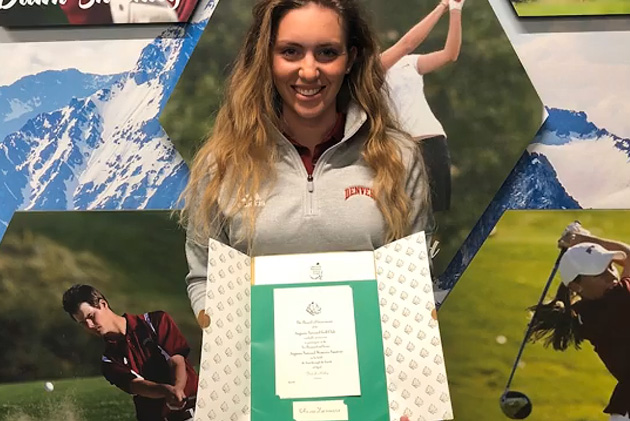 Nearly a year has passed since Westminster’s Jennifer Kupcho gave us all goosebumps with her jaw-dropping victory in the inaugural Augusta National Women’s Amateur.

The invitations to the second edition of the event went out last week, and another player with a Colorado connection will be in the field.

University of Denver freshman Anna Zanusso, a 19-year-old from Italy currently ranked 75th in the World Amateur Golf Ranking, will tee it up in Augusta, Ga., April 1, 2 and 4.

Prior to arriving at DU as the highest-ranked incoming freshman in program history, the native of Castelfranco Veneto (less than 30 miles northwest of Venice) won the 2018 Annika Invitational Europe, Internazionali d’Italia Femminili U18 and starred on the Italian national junior team.

In late September, the 19-year-old Zanusso won her first collegiate tournament, the Golfweek Conference Challenge, at Red Sky Golf Club, shooting an 11-under 205, two shots better than any of the 91 other players in the field.

Zanusso’s team-leading 72.07 scoring average is currently a full shot lower than senior Mary Weinstein’s 73.00. Weinstein is the reigning Summit League Player of the Year and Colorado Golf Hall of Fame’s Person of the Year, having won the Colorado Golf Association’s 2019 Women’s Match Play and Stroke Play.

She told CBS-4’s Eric Christensen that receiving the invitation was “the best five minutes of my life.”

The first two rounds take place April 1 and 2 at Champions Retreat Golf Club, with the top 30 players making the cut and advancing to play at Augusta National on April 4.

On April 3, all 72 players get to play a practice round at the home of the Masters.

Zanusso hopes that Saturday’s round will indeed be practice for Sunday’s. Her family—including her father, who’ll probably caddie for her—will fly from Italy for the entire event, as will her coach.

But whether or not she makes the cut, she’ll make them, her country and Colorado proud.