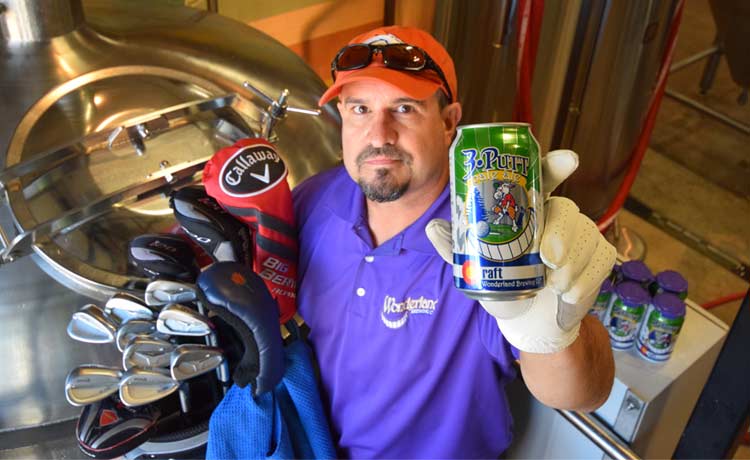 Beer and golf go together like peanut butter and jelly, and the rise of canned craft beers has only strengthened that relationship.

Wonderland Brewing Co. has taken it even further with its golf-inspired brew, 3-Putt Pale Ale. “I wanted a beer that was refreshing and not overly hoppy or full of alcohol, that could speak to a golfer’s game,” Wonderland founder and owner Robert Lucero explains.

He comes by his passion honestly. “My brother’s a pro, I grew up playing golf, I maintain a four handicap, so I just love golf,” he says. “We’re really not creating a completely different beer, we’re making a pale ale that’s refreshing, made with the finest ingredients on the finest equipment.”

An American pale ale that uses German hops, 3-Putt drinks fairly easily at 5.5% alcohol by volume. There’s more herbal than bitter hop flavor, making the pale ale a bit more accessible for non-hopheads. As for the name, Lucero recalls golf matches where the first person in a group to three-putt had to buy a round. This playful attitude is exhibited throughout the taproom located in Broomfield, about 15 miles north of Denver. The large lot Wonderland occupies comprises a small soccer field, a full-size basketball court, outdoor seating, and a room full of ping pong tables.

Having fun is at the heart of the Wonderland atmosphere—something Lucero, a former Disney theme park ride designer, revels in.

However, the beer itself is serious business. In the two years since Wonderland opened, Lucero has invested heavily in state-of-the-art equipment and the best ingredients. There is still room to add more equipment for expansion.

“I tell people I bought a huge pair of pants and we’re just trying to grow into them,” he says while standing in front of hundreds of pallets of cans to be filled with 3-Putt and Wonderland’s other canned offering, Alice Blonde.
Wonderland’s distribution is currently between Fort Collins and Colorado Springs, with availability at around ten courses. Lucero intends to increase that number this season. The canning line wasn’t operational until the end of summer, so 3-Putt didn’t make it onto as many courses as Lucero would’ve liked, but the response so far has been good.

“Most golf courses don’t know who we are,” he admits. “But the ones we hit have done really well with our beers and sold through.”

Robbie “R2” Lucero is the “mayor of the neighborhood.”

In addition to further expansion, Wonderland’s next phase is the development of a barrel program. Lucero points out several of the current barrels, going down the line like a kid showing off his new toys: “This is a Berliner Weisse; it’s a fourth-use whiskey barrel…This is the 2016 anniversary barleywine… Over here are some red wine barrels that have a sour in them.” His grin spreads as wide as the Cheshire one on Wonderland’s logo.
Despite the brand new equipment, the continued expansion, and the quality of beer Lucero and his brewers are turning out, none of the accomplishments bring him more joy than leaving behind a legacy for his son, Robbie, or R2 as they call him.

“I did this for my son,” says Lucero. “At the end of the day it’s not about 3-Putt or golf courses, or even craft beer; it’s about my kid.” R2 has special needs and likely won’t be able to enter the workforce in any normal capacity, so Lucero wanted to create something that would continue to grow so his son would never have to work, but at the same time be a part of a community.

“We were told when Robbie was five months old at Children’s Hospital that he ‘would never walk or talk.’” Lucero explains. “It was the worst day of my life. But we got right to work and he not only walks, he talks and talks, and talks. He’s the mayor of our neighborhood. I can’t take him anywhere without kids and adults coming up to talk to him. Without him, there would be no 3-Putt beer for sure.”

The community has embraced the brewery, and Wonderland has given back in the form of an annual brew fest, The Halloween Craft Brew Ball, to raise money for The Arc, a Colorado-based thrift store chain that supports those with intellectual and developmental disabilities. Thirteen breweries participated in 2015, and Lucero plans on making the event even larger next year.

This community-mindedness directly correlates with the atmosphere of the brewery. When you look around the taproom, there isn’t any typical patron, just groups of neighborhood folks who have the freedom to enjoy themselves at whatever pace they desire. A row of booths gives friends and families a place to relax away from the bar, and the ping-pong tables draws those looking for a little more activity. A quick survey of the people there on a Tuesday evening revealed a group of moms with special-needs children who get together once a month, a nonprofit company work meeting, some friends exchanging holiday gifts.

None of the groups knew about Wonderland’s charitable efforts or that the owner’s son also has special needs. By creating a gathering place more exciting than any ride in Orlando, Lucero is living proof of the good that will flow when you pour yourself and your beliefs into your work.

This article appeared in the Spring 2016 edition of Colorado AvidGolfer.

Too Big to Ale?

Craft Beer in a Company Town

“I Always Play Better After a Few Beers”