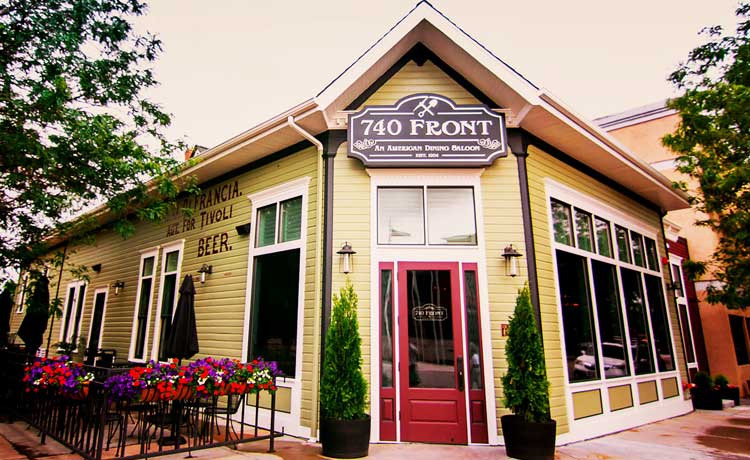 Resurrected as 740 Front, the centenarian saloon is more charming and delectable than ever.

Like Louisville’s beloved Coal Creek Golf Course following the floods, the venerable Old Louisville Inn has been refurbished with its spirit—if not its name—intact after closing in October, 2013.

That’s when restaurateur Fred Burns stumbled on the place. A great Irish pub built in 1904, the OLI was the last remaining saloon of the original 13 that lined the three-block strip of Front Street. Designated a historic landmark, the building was renovated with contributions from the city to restore the exterior’s original design.

After leasing the building and renaming the establishment after its 740 Front address, Burns and his partners had a directive to preserve the interior’s vintage charm, complete with a stunning antique wooden bar, one of Colorado’s two oldest, built in the 1880s by the Brunswick Company Factory in Dubuque, Iowa. Made up of cherry, birch, and mahogany, the “Del Monte” model was cut-to-fit, constructed without a single nail. It’s a treasure steeped in local lore. Due to dangerous gases in Louisville’s coalmines, the miners could not smoke, so most chewed tobacco. The copper spit trough, once equipped with running water, runs along the foot of the bar.

During the 740 Front build, Burns’ team took out the low ceiling upstairs, and the original wood has been repurposed and incorporated into the tabletops, upper dining room rafters, hostess stand and anywhere else it was deemed practical. An addition to the building’s south side provided more dining space. The building is now rehabilitated but still comfortable and modern enough to thrive.

“We wanted to approximate the early 1900s, getting the wallpaper and paint appropriate to the period,” Burns says. “We didn’t want to detract from the bar. Heck, we can’t hide what it originally looked like—it’s a saloon. Back in the old days of railroad cars and cargo ships, the best eating was at dining saloons. So we call 740 Front an ‘American dining saloon,’ doing predominantly American-style food—steaks, seafood, a little Italian.”

Burns, who grew up in Colorado, started in the steakhouse business (remember Victoria Station in Glendale?) and spent 25 years in the Bay Area before returning to Colorado to be near his grandchildren. With a location one block east of Louisville’s bustling Main Street, Burns knew mediocrity wasn’t an option, so he brought in Executive Chef Paul Bourrillion, whom he had hired in Denver when he was just 16 and continued to work with in California.

Not every chef goes to culinary school; Bourrillion’s career has meant constant learning and improving. “I learned from the ground up, peeling potatoes,” he says. “In the Bay Area, I’d get yelled at by chefs in French. Good thing I don’t speak French—they were probably saying something about my mother! Now I hire guys who have gone to school and wave their piece of paper around. I have to retrain them! But I am jealous that they’ve learned about chemistry and so much more.”

The modest Bourrillion is not at 740 Front to create a new cuisine, just great food. Ensuring cooking consistency is a hard act to pull off, but from one visit to the next, 740 Front’s various steaks, chops and seafood arrive cooked to the ideal texture and the perfect temperature for any desired doneness.

To start, go with the 740 Hot Cheese Dip with Spinach, a special blend of white cheese, spinach, onions, jalapeños, tomatoes and sweet red peppers. “That recipe dates from our Mexican restaurant days,” Burns says. “Why not put it on the menu here? It’s good!”

And the 740 Baked Oysters Asiago is a decadent, heavenly delicacy—plump, fresh bivalves baked with fresh spinach, a splash of Pernod (the essential pastis liqueur) and creamy Asiago cheese. The 740 Deluxe Seafood Cocktail is distinctive in its blend of flavors—lots of shrimp and crab mixed with onions, Serrano peppers, garlic, green olives, cilantro, chili sauce and Clamato juice. A recent visit brought the special appetizer of an enormous Crab Cake—Maryland blue crab with hardly any filler or binder, crusted with panko and topped with a spicy rémoulade, served on a bed of greens with a red pepper and eggplant coulee.

Of the soups, the hearty cream-based Clam Chowder brims with sweet corn and briny clams with smoky pancetta. A classic wedge salad is all about simplicity, but the 740 Unwedged plays up contrasts in flavor and texture—the chilled, crispy iceberg lettuce, red onions and cherry tomatoes are served with roasted pecans, a crunchy, salty, slightly fatty roast pancetta wheel and the
rich creaminess of house-made Maytag blue cheese dressing.

The enticing dinner entrees include the Veal Milanese—a pounded veal chop lightly crusted with a thin coating of bread crumbs, served with a lemon butter sauce and topped with a shimmering muddle of fresh basil, arugula and tomatoes—and the succulent, center-cut Pork Chop, which is brined to guarantee the thick cut is juicy, tender and thoroughly seasoned. It comes grilled and presented with mashed potatoes, tasty pork jus and roasted vegetables.

The variety of seafood includes a mouthwatering Colorado Striped Bass, a mild-tasting filet with a firm yet flaky texture transformed by a lemon caper butter sauce. The Wild Caught Gulf Shrimp and Scallops showcases large, succulent shrimp wrapped in smoked pancetta and scallops, skewered and grilled, dished up on an arugula and Tuscan bean salad dressed with balsamic vinegar.

From behind that priceless bar comes a choice selection of craft beers, wines and handcrafted period cocktails. The ultra-competent Anne, an enthusiastic and knowledgeable server on two recent visits, recommended
Craggy Range’s Te Kahu, a red wine blend from the Hawkes Bay region of New Zealand. An artful, distinct aggregation of Merlot, Cabernet Franc, Cabernet Sauvignon and Petit Verdot, it made all of the dishes sing.

The old watering holes of Louisville were connected via underground tunnels, the remnants of which can still be seen with a visit below the ground floor of the grand old structure. Rumor had it that OLI basement was home to a ghost named Samantha, a trollop who was stabbed to death inside the building by one of her less than satisfied customers. Over the years, a number of OLI customers and staff reported seeing her.

740 Front staff has faithfully kept the OLI spirit intact. But does that aply to this particular spirit? From the kitchen comes the disembodied voice of Bourrillion. “I don’t know if that was a ghost,” he demurs. “Or the booze.”

Gary James is a Boulder-based food and music writer. Read more of his restaurant writeups in the Lifestyle section of www.coloradoavidgolfer.com.

Pan-Frying for Gold: The Broadmoor hits pay dirt with Restaurant 1858 at Seven Falls