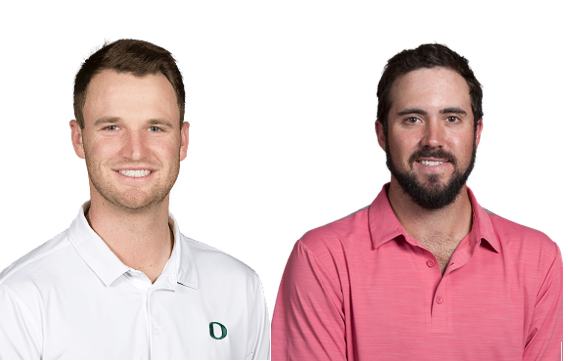 Clark and Hubbard will be in the same group at TPC Scottsdale.

At 1:05 p.m Thursday, Jan. 30, two of the three players teeing off on the tenth tee in the PGA TOUR’s most popular event—the Waste Management Phoenix Open—will hail from Colorado.

Colorado Academy alumnus Mark Hubbard and Valor Christian grad Wyndham Clark, who never competed against each other in high school (Hubbard graduated in 2007, a year before Clark enrolled as a freshman), will play at the TPC Scottsdale in a group with Sam Ryder on Thursday.

Lightly recruited by colleges as a golfer, Hubbard blossomed late, winning the Colorado Golf Association’s 2007 Boys Junior Match Play and Junior Stroke Play shortly after graduating from high school. He attended San Jose State University, where he won the 2011 Western Athletic Conference Championship, and then played on the Mackenzie and Korn Ferry (then web.com) Tours before earning his PGA TOUR card.

He kept it for three years before heading back to the D-League. Last year’s victory at the LECOM Suncoast Classic highlighted a season in which he finished ninth on the Korn Ferry points list, punching his return ticket to the PGA TOUR.

Currently ranked 28th in FedEx points with 412, Hubbard finished second to fellow Korn Ferry alum Lanto Griffin in October’s Houston Open and has thus far only missed two cuts in his 10 events. His $1,072,398 in earnings places him 29th in official money.

In contrast to Hubbard, Clark was the phenom who won the state’s junior boys stroke play and 4A high-school championships in 2009, and the Colorado Amateur Championship in 2010. He went to college golf’s perennial powerhouse, Oklahoma State University, where he took Big 12 Player of the Year honors in 2014, before transferring to the University of Oregon for his senior year. In 2017, he won the Pac-12 Championship (played at Boulder Country Club) and was named the conference’s and GolfWeek‘s Player of the Year.

A solid campaign on the Korn Ferry Tour qualified the highly touted player for the PGA TOUR, where he notched three top-10 finishes as a rookie, earning $1,278,721 in official money and finishing 64th on the FedEx Cup points list.

Clark missed the cut in the 2018 Waste Management event, his first and only time playing it. Hubbard made the cut twice, his best finish a 6-under-par, good enough for a T42 in 2017.

Coincidentally and concurrently, as they Hubbard and Clark go off on 10, Martin Laird will begin his quest for a fourth PGA TOUR victory and his first since 2013—on the first tee. The Scot who graduated from Colorado State in 2004, has notched four top-10 finishes in the Waste Management Phoenix Open, the most recent a T9 (13-under) in 2018. He best was a T3 at 16-under in 2011.

Of course, Colorado’s Kevin Stadler won the Waste Management tournament in 2014. Injuries over the last five years have limited his playing, but he’ll be teeing off at 8:00 Thursday at TPC Scottsdale, looking to make his first cut of the season.

In addition, 2001 Colorado Amateur Champion Marty Jerston, whose victory in the most recent Southwest PGA Championship earned him a spot in the field, will tee off behind Clark’s and Hubbard’s group at 1:15 P.M. Broomfield’s Kyle Westmoreland, who played for the Air Force Academy, received a sponsor’s exemption and will go off the first tee at 0900 hours.

Two-time Colorado Open winner Jonathan Kaye of Boulder, who won this event in 2004, will not be in the field.