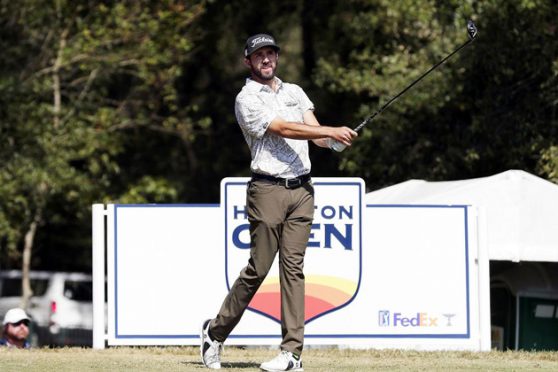 A 13-under in the Houston Open leaves the Colorado Academy alumnus one shot shy of victory.

With a one-stroke lead heading into the 15th hole of the Houston Open, four holes were all that stood between Mark Hubbard and the first PGA TOUR victory by a Colorado player since Kevin Stadler captured the 2014 Waste Management Open in Scottsdale.

His chances looked strong, too. The day before, the player known as “Hubbs” birdied the first three of those final four holes en route to a second consecutive 69. Plus, his drives had found every fairway on Sunday, keeping his card clean on the front nine with a 4-under 32—highlighted by an 80-foot eagle putt on hole 4.

Making par on the first five holes of the back nine, Hubbard had pulled ahead of fellow Korn Ferry Tour alumni Scott Harrington and Lanto Griffin, the 54-hole leader whom he began the day one shot behind—and with whom he played in the day’s final pairing.

Those back-nine pars, Hubbard says, all involved looks at birdie—and, in hindsight, he admits, they were missed opportunities to separate himself from the field. When he arrived at the 614-yard par-5 15th, “I knew I needed to hit two shots as long and hard as I could to get there.”

On 15, Hubbard pulled his tee shot just left of the left fairway bunker—his only missed fairway of the day. The ball kicked into the deep rough near the tree outline. He scrambled to give himself an eight-foot par putt that just missed, drawing him even with Griffin (who’d made par) and Harrington (who was in the clubhouse at 13-under).

Hubbard concedes he didn’t look at the leaderboard until after the 15th. “I was thinking I was tied and needed a birdie,” he says. “It was a strategic error more than anything else. In hindsight, if I had known I was up, I probably would have played a more conservative fairway shot off the tee.”

Griffin then birdied the par-3 16th to go up a stroke on both Hubbard and Harrington. After pars on 16 and 17, Hubbard had one last chance with a bold tee shot on the 18th, one of the PGA TOUR’s toughest driving holes, with water down the left side and a large bunker right. A short iron left him with a 27-foot playoff-forcing putt. It stayed just left of the hole, leaving Griffin to par his way to his first PGA TOUR victory. Hubbard and Harrington tied for second at 13-under, each earning $667,500.

“I’m obviously bummed, but Lanto played great and deserved it,” Hubbard said. “At the end of the day I’d be more upset if I hit some bad shots. I’m playing awesome. On 18, that was the most nervous I’ve ever been on a tee shot, but it was also my best swing of the tournament. I’m proud of the quality of the shots I hit on those last two holes. I didn’t lose it as much as he won it.”

The 30-year-old Hubbard, who spent three years (2015-’17) on the PGA TOUR before having to requalify through the Korn Ferry Tour, has made the most of his return to the big show. In September, he finished T10 in A Military Tribute at The Greenbrier and T13 at the Safeway Open.

His weekend performance at the Golf Club of Houston vaulted him to seventh in the FedExCup Rankings.

“I’ve played out of this category a few times,” he says, referring to his experience coming from the developmental tour. “I think that’s an advantage I have. The rookies don’t know know that the fall season is really important. You have to play all the fall events. You think you want a break after playing all summer, but you have to suck it up, grind it out and play as many events as you can before the end of the year.”

He also ascribes his recent success to a change in mindset. “The first time I was on the TOUR, I was too results-oriented,” he says. “I now have a much better understanding of my particular game, what I need to do to play well. I’m in a lot better place mentally. I worry about the stuff I can control, like my pre-shot routine, and not about the stuff I can’t control, like when you do everything the right way and a putt still doesn’t fall.”

Confidence, he says, “is huge in this game. It snowballs in both directions. The better you play the easier it is to play better, and I’m playing awesome.”

Hubbard’s hard-earned confidence doesn’t sound arrogant when he earnestly says, “I feel like I can win one of the next three tournaments I’m playing in.”