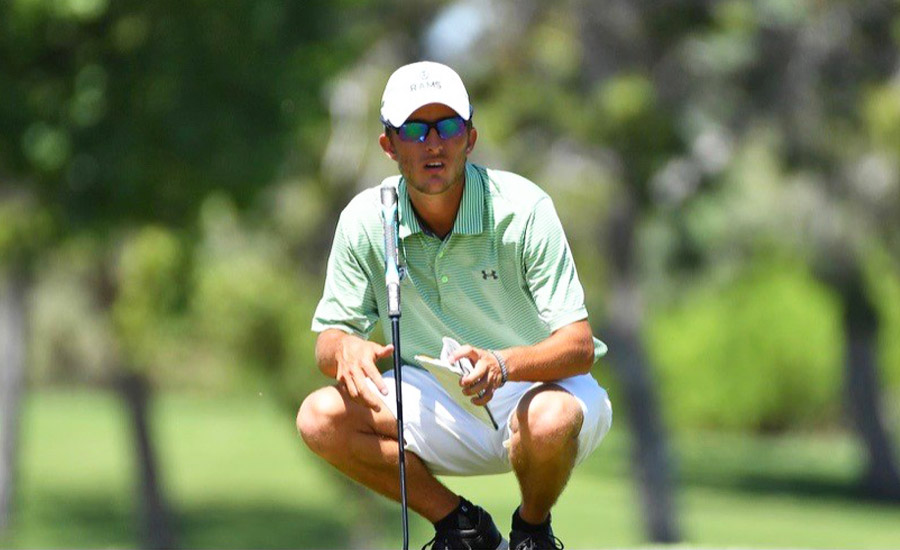 Before classes (online? in-person?) resume at Colorado State University, Davis Bryant found himself hitting the road for a summer fling. First, there was a stop in Utah for a little jet skiing, followed by a quick jaunt to Las Vegas. After that, the schedule gets a little complicated—a flight to San Francisco, followed by another to Eugene, Oregon, and then a drive of about three hours. But the payoff is more than worth the effort—a spot in the 120th USGA U.S. Amateur Tournament at Bandon Dunes.

“It’s super exciting,” Bryant said of his opportunity to play in the prestigious event, which has been won by the likes of Bobby Jones, Jack Nicklaus, Tiger Woods and Colorado’s Craig Stadler. The tournament, contested on the Dunes and Trails courses at the facility, begins August 10th. Bryant says he’s planning on arriving in Oregon in a couple of days and will walk the courses with his father Matt, the director of golf at Green Valley Ranch Golf Club, who will caddie for him. Practice rounds will take place on August 8 and 9; the following day, Bryant will compete with 263 other players in two days of stroke play, whittling the field down to 64. That’s followed by four days of match play, culminating in a 36-hole championship match on Aug. 16.

This will be Bryant’s first appearance in the Amateur, although he’s played in the U.S. Junior Amateur in 2015 and ’17. he’s also never played at Bandon Dunes, although he says he’s received pointers from Brandon Roll, the tournament director for the CoBank Colorado Open, which is played at GVR, as well as one of his uncles.

“What I’ve heard is that it’s all about the angles—where you place your drives kind of sets up the rest of the hole,” Bryant said. “We’re just going to have to figure all that out—and there’s going to be wind and maybe some rain, so those are other factors to add into it all…it’ll be great to have my Dad on my bag because he’s very knowledgeable about my game and it’ll be great to have another set of eyes on everything.”

Of the last times Matt caddied for Davis was during the final round of the CoBank Colorado Open, when the son jokingly chided the father for being responsible for an even-par 72 that left him waving from afar at the tournament leaders.

“Nothing new there,” chuckled Matt.

But little did they know of the good news that awaited them. Davis said he had received a text that morning from the USGA; that, in and of itself, wasn’t unusual—in a year in which qualifying play for the Amateur was cancelled because of the novel coronavirus, the organization instead said spots would be given to players who’d earned exemptions in a number of categories. One of them was the World Amateur Golf Rankings; because of his status there, Bryant had been told he was an alternate for the U.S. Amateur and over the previous couple of weeks there had been regular communication about where he stood on that list.

So when another email popped into his phone that Sunday, Bryant, already enmeshed in his preparations for the final round, ignored it. It wasn’t until he started scrolling through the leaderboard to see where he stood amongst the other amateurs in the field (sixth, behind a quintet that included his CSU teammate A.J. Ott, a fellow All-American who’s also competing in Oregon), that he remembered to check on the message.

Bryant had indeed moved up again on the pecking order, this time to a secured spot in the field. The news sent his mother Julie, the executive director of the First Tee program at the club, bounding onto the course for a heartfelt embrace.

“I knew things were moving in the right direction, but when I saw the email I was kind of shocked—it was like ‘Holy Smokes, I’m in the tournament,” Bryant said. “I had been pretty disappointed in my round that day, and then you get an email and you’re pretty stoked.

“I’ve tried qualifying for it before a couple of times, and I missed it by two shots and then maybe four or five; it would have been nice to earn my way in through a qualifier this time but I’m definitely not complaining—no matter how it happened I’m in and when you’re in, anything can happen.”

Meanwhile, a quartet of high school golfers from Colorado have been participating in another impressive competition this week on the other side of the country. The National High School Golf Invitational is bringing together players from across the nation to historic Pinehurst resort in North Carolina.The three-day, 54-hole stroke play event concludes today; heading into the final round, Hunter Swanson of Northfield High School in Denver, was tied for 28th place in the field of more than 200 players. Swanson, like Bryant, a member of Green Valley Ranch’s First Tee program, finished tied for second in the 2019 Colorado Boys Class 4A state golf tournament.

Kaden Ford of Discovery Canyon High School, who tied with Swanson for second place at state last season, is also playing in Carolina, along with Gregory Lewis of Lewis-Palmer and Jeffrey Nelson II of Prairie View High School.

Welcome to Colorado AvidGolfer’s celebration of the Best in Colorado Golf. The awards are a readers’ choice celebration known now and forever as the CAGGY

Winners never stop working! Right after the big win, Bryson is here at MAT Headquarters getting back to training!! Simply stated: Bryson is an incredibly

Like many in the Ikon Pass community, if you’ve been dreaming about the mountains, the open road becomes a welcome means to an end this

Titleist has launched two new CNCPT irons and, like their immediate predecessors they are not, er, competitively-priced.