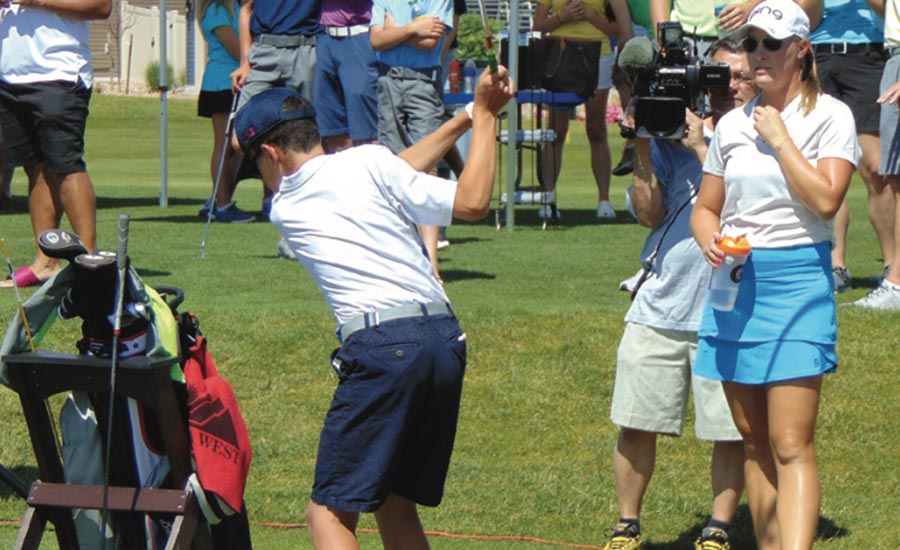 While golf is certainly part of the program (with a bit of hula-hooping thrown in as well), participants in the First Tee at Green Valley Ranch score some more enduring life skills.

LISTENING TO HER son Davis during a recent interview, Julie Bryant marveled at how articulate and measured her son, an All-American golfer at Colorado State University, sounded. Speaking to him later, she asked about the source of his poise.

Julie Bryant can probably take some solace in the fact that it might actually be pretty hard to divine where the lines that separate heart and home for the Bryants run. Davis and his sister Emma, a star golfer at Eaglecrest High School in Aurora who’s already earned a scholarship to the University of Denver, practically grew up in the First Tee program at Green Valley Ranch Golf Club. Their father Matt, is the director of golf at the Denver facility, and Julie is the executive director of the First Tee program there.

Besides, if her confidence really needs boosting, she could listen to Stacy Rodriguez. Her son Joaquin, a rising freshman at Riverdale Ridge High School in Thornton has been a regular at the First Tee since he was five. Stacy says that’s due in large part to Bryant.

“The program has these nine core values; things like honesty, respect and confidence, and you can tell she lives them herself and makes sure that the kids are living up to them too,” Rodriguez says.

In fact, like Davis Bryant, Joaquin says the First Tee has become something of a North Star: “Really, I find myself thinking about [those values] every day—on the golf course, off the golf course, at school—the program has taught me you have to have integrity in life.”

One reason why parents like Rodriguez appreciate what she does is because Bryant approaches the work, well, like she was looking out for her own children.

“It’s like, what would I want to see if I were a parent bringing my kid in? You want to know that they’re organized and they kind of have everything together,” she says. “And hopefully this is something that goes beyond golf for them, because there’s lots of skills they pick up here that they can use in their lives—whether it’s interacting with the donors who come out to play with them on our par-3 course, or volunteering and helping out during our championship events; that’s something they can use outside of here, whether it’s learning how to talking with a teacher or developing the self confidence to cope with things like bullying with their peers.”

And you never know where that self-confidence might lead someday. A couple of years ago, Jennifer Kupcho—at the time a student at Wake Forest, not that far removed from First Tee eligibility herself—stopped in for a chat with the kids.

At one point during a question-and-answer session, Joaquin decided he could do a better job engaging Kupcho than the moderator, Altitude sportscaster Vic Lombardi, and essentially took over the interview.

“He just wanted to know more about some of the stuff that was going on in golf at the time,” Stacy says.

Because of the novel coronavirus, this year’s First Tee program was pushed back by almost a month; since reopening, officials have curtailed the number of attendees by about 20 percent, the better to adhere with the current social distancing guidelines.

Stacy Rodriguez says she’s seen the impact of the pandemic firsthand because of her work as a nurse. She adds that there was never a doubt that, if and when the program reopened, Joaquin would be front and center.

“It’s not like basketball, where the players are always making contact with each other—golf is pretty safe when it comes to things like social distancing,” she says.

“Everything else was being paused and canceled and everybody was being quarantined, but I was never really afraid to go back,” Joaquin adds. “It was a little weird, because it was the first time we were all seeing each other again, but it was great to be back out on the course again.”

Bryant said watching the Rodriguezes (Joaquin’s younger brother, seven-year-old Sam, is also in the program) and other kids cavorting across Green Valley Ranch recently made it clear to her that the decision to reopen was the right one.

“We went back and forth for a long time—’Should we, shouldn’t we?’—it was nerve-wracking and scary, but then you look out there and you a kid who was super shy and now he’s laughing and volunteering and jumping right in there, and it makes you feel so good, that you know you made the right choice.”

This article was also featured in the July 2020 issue of Colorado AvidGolfer.