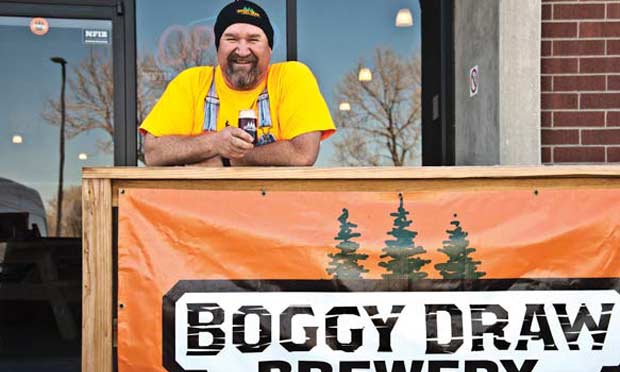 Sporting overalls, thick goatee, and a frame worthy of his “Beef” nickname, Dave Miera could easily pass for a barbecue pit boss. The imposing exterior melts away with a welcoming handshake and deep, mountain drawl. Dave is the founder and owner of Boggy Draw Brewery, which opened last year at S. Platte River Drive and Hampden and has quickly become a Denver-area staple with a surprising variety of ales on tap, ranging from traditional porters and pale ales to barrel-aged and kettle-soured offerings.

With the plethora of breweries throughout the area, many taprooms focus on a distinguishing central theme. Dave has chosen one near and dear to his heart—hunting. Located near his hometown of Mancos in the San Juan National Forest, the Boggy Draw wilderness was the first place he hunted as a child with his father, who passed away shortly after the trip.

The theme didn’t come together until he started the build-out of the brewery and taproom. A carpenter by trade, Dave both designed and built the interior himself with lumber from Mancos. “I found out there was a mill in my hometown, and the guy that runs it graduated with my uncle,” he remembers. “I just showed up at his house and found out that he was a home-brewer, which was kind of cool.”

The cuts of wood allowed Dave to design larger tables than he originally intended, and he utilized the natural rugged look of scrub oak for the table legs. The wall décor is a bit sparse, with most of the startup costs presumably—and logically—going towards equipment. Still, it will only take a few more trophy mounts and sporting art to transform Boggy Draw’s long, high-ceilinged taproom into your cabin-away-from-home.

Miera knows hunting can be a touchy subject for some people, but he emphasizes Boggy Draw is for anyone looking to have a good time. “I want people to come in here knowing we’ve got good beers, and that we’re a very open environment,” he says with a chuckle. “Just come in and have fun with us.”

Actually, it’s surprising more hunters aren’t brewers, as both require an enormous amount of patience and precision. For Dave, hunting provides an escape from the day-to-day grind. “More than anything, the best thing is being in the woods by yourself,” he explains. “You don’t have to worry about who’s running the country or who’s bombing who. It’s just a good time to be out by yourself with your thoughts and believe what you believe.” Asked if he still has the time to hunt, he replies without hesitation, “Oh yeah, you make time.”

Plans also call for distribution to more than just the four other bars currently tapping his beers. He’s even thinking about pitching a custom beer to local hunting clubs and lodges, as well as hosting an educational class where patrons fill out their hunting license applications.

Dave caught the brew bug in 1989 as a college student after picking up a copy of Charlie Papazian’s The Complete Joy of Home Brewing. The idea of going pro percolated until 2008, when a visit to Pagosa Brewing Company “rekindled my interest, and pretty much ever since I’ve tried to make this happen,” he says.

And happen it has. Since opening Dave has had to produce more than he anticipated, but not more than he could handle. “In my business plan I thought I’d have eight beers in the first year, and I’ve got 16 beers on tap,” Dave chuckles before taking a sip from a Boggy Draw mason jar-like mug. “It’s happened a little bit quicker than I thought, but it’s just about adapting. We’ll probably end up with 24 taps here.”

Multiple taps mean a style for every palate. One of Boggy Draw’s flagships, Lemondrop Pale Ale, appeals to both a hardcore enthusiast and novice drinker. Although it has a fairly high abv of 7.2%, it is very drinkable, not overly bitter, with a medium hoppiness coming in the form of aroma and a flavor with notes of lemon zest and citrus fruit. Stronger still is Dave’s signature Mach V Porter, with a foundation comprised of vanilla honey, maple syrup, almonds and cinnamon. True to its Speed Racer-inspired name, this rich imperial porter revs at 8.5% abv.

The cream ale, Space Cowboy, is bit more body than lighter versions, with a sweet corn aroma and flavor, and hint of bittering balance. Another version (and nod to rocker Steve Miller’s “The Joker”), Gangster of Love, ages Space Cowboy inside gin barrels from Boulder’s Vapor Distillery. The result is a silky-smooth beer with additional floral aromas, and flavors of vanilla, tropical fruit, and licorice.

Although the staff proudly wears hunter-orange t-shirts and some taps are made from deer antlers, you won’t see a crowd of stereotypical hunters sidling up to the bar. Each guest seemed to have a special spot they made a beeline to, and rested their arms on the bar like it was in their own basement.

Looking at these comfortable men and women brought to mind my big-game-hunting, Budweiser-drinking father back home in Kentucky. Boggy Draw might be the one place I could get him to try a craft beer.

Cody Gabbard contributes regularly to CAG and the Boulder Weekly.

This article appeared in the Spring 2016 edition of Colorado AvidGolfer.

Too Big to Ale?

“I Always Play Better After a Few Beers”