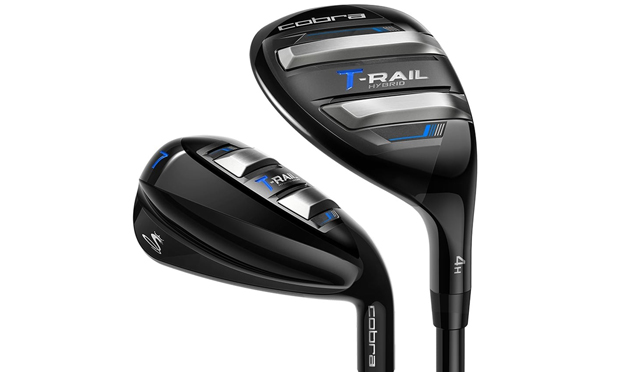 Yes, another Cobra product. And yes, another game-improvement club. The hybrid-like T-Rail might be ideal for the golfer getting ready to flee the cold this winter.

We’ve done it before. In August/September of last year, we seemingly went weak at the knees for Srixon, featuring two of its golf balls and its Z Series woods and irons in a five-week spell. By focusing on its new T-Rail iron-hybrid set this week, it means we’ve devoted three recent gear stories – the King Forged Tec and F-Max Airspeed preceded the T-Rail – entirely to Cobra which has clearly chosen Fall to get a jump on the PGA Merchandise Show in Orlando when other OEMs typically release new gear.

Tom Olsavsky, VP of R&D at Cobra Puma Golf, tells us Cobra tends to release players’ clubs late in the year so the better golfers they’re aimed at are ready to hit the following year’s competitive season running, though this isn’t the first time the company has released both players’ clubs and game-improvement gear in the fall. “The timing of releases is important to maximize sales, obviously” he says. “We have a robust business in the US sunbelt, so we wanted to get make these clubs available for our older players who might be playing in southern areas this winter.”

The first question that springs to mind after featuring two game-improvement clubs from the same company – T-Rail and F-Max AirSpeed – in as many weeks, is how do they differ. And who should play which?

Well, they look totally different for starters. The AirSpeed has a traditional iron shape with a deep-cut cavity, while the T-Rail is modeled on the hybrid shape. As we emphasized (rather strongly), the AirSpeed is extremely light and designed to help players losing a little power maintain their swingspeed and get the ball airborne. The T-Rail makes no attempt to retain the look of an iron. It’s in the name – it’s an ‘iron-hybrid’. Olsavsky said it himself – it is aimed at ‘older players’ who play in ‘southern areas’…snowbirds who may not be as eager to pick up trophies or lower their handicap as they once were, but who still love the game and want to keep enjoying it as much as they possibly can.

T-Rail irons have a hollow body and a high-strength 455 steel face designed in the company’s E9 pattern to help maintain ball speeds no matter where contact is made. And while the AirSpeed has a traditional sole shape, the T-Rail has a wide sole that lowers the Center of Gravity (CG) thus helping you send the ball higher.
The most conspicuous difference though, besides their overall shapes perhaps, are the familiar Cobra Baffler rails on the bottom of the T-Rail which not only help lower the CG but move the club through impact efficiently minimizing the effect of turf-interaction.

Choosing between the T-Rail and AirSpeed might simply be a matter of taste, though we suspect the super-senior might feel more comfortable with the T-Rail while the AirSpeed might be better-suited to ‘younger’ seniors who aren’t quite ready for a set of iron-hybrids just yet.

If you’re leaving Colorado this winter to find golfable weather in Arizona, Florida, or overseas and are looking for a set of clubs that compensate for your loss of (insert lost faculty here), then we certainly suggest you give the T-Rail a trial.