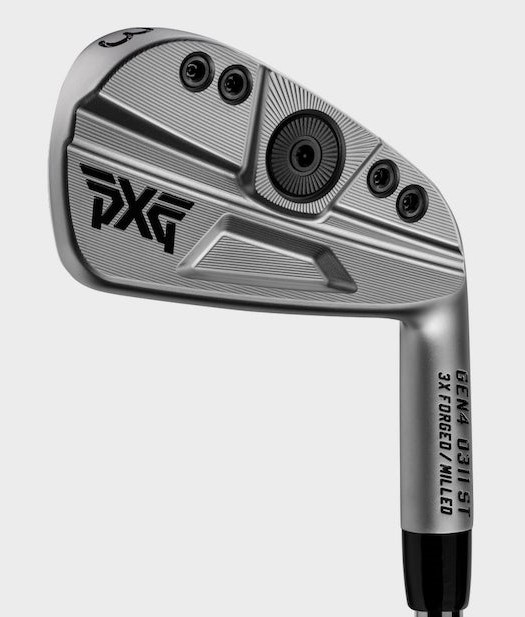 PXG burst onto the scene in 2014 with an extensive roster of Tour players, Bob Parsons-fueled bluster and hi-tech clubs whose price-tags asked an awful lot of consumers. The outspoken Founder and CEO confidently proclaimed them the best clubs in the world, and plenty of golfers jumped on board believing the eye-catching configuration of tungsten alloy weights toward the bottom and toe end of the club, extremely thin H1770 maraging steel face and Thermoplastic Elastomer (TPE) vibration-dampening material that filled the hollow body justified the cost.

Named for Parsons’s status as a rifleman in the US Maine Corps, the original 0311 iron along with its three stablemates – the X, T and XF – survived two and a half years before the Vietnam vet instructed his two former Ping designers/executives Mike Nicolette and Brad Schweigert to update it. Gen 2 appeared in 2018 with a similar line up to its predecessor but with the addition of the SGI (Super Game-Improvement) model. The tungsten weight configuration was one screw down (nine instead of 10), TPE became COR2 and the back surface was angled to allow for more weight in the toe thus increasing the club’s Moment of Inertia (MoI), but the new club retained its distinctive look and the PXG legend continued to grow.
Gen 3 arrived just 18 months later in early 2020. The biggest change, besides some minor cosmetic alterations and the removal of the SGI model in favor of the first ST (Super-Tour) blade, was the move from COR2 to DualCOR which comprised a soft, inner, high-COR polymer fronted by a slightly firmer material to support the thin face and give the club structural stability.

Though received well enough, Gen 3 did have its drawbacks. The DualCOR was difficult to inject and didn’t have quite the COR power many had hoped for and, at $425 an iron, it tested even a few PXG loyalists’ resolve.

Gen 4 would need a new material for the hollow body, and it arrived little more than a year later. The newest line-up appeared in March of 2021 with something called XCOR, a new elastomer created alongside a thermal plastics specialty company and which Schweigert said was the perfect material, giving the face the supports it needed to avoid caving in while achieving the largest generational COR gains yet.

That alone would have been reason enough for many to trade in their previous set for the new club, but the GEN 4 line, initially made up of the P (Players), T (Tour) and XP (Xtreme Performance) models offered other significant enhancements. For starters, it cost ‘just’ $350, and was forged (Gen 3 was 100% milled) from 8620 soft carbon steel five times – yes, five – prolonging the life of the grooves and, says PXG, improving the grain structure and thus the club’s feel. Some precision-milling in the back ensured dimensions and appearance are consistent, and the weight configuration was changed quite dramatically with the number of screws being lowered to just five – two smaller screws on each side of a large, adjustable, central weight that obviously keeps the Center of Gravity (CG) low but also gives players the ability to adjust the weight of the club (weights come in 2g increments up to 18g) to promote the feel, launch, spin, trajectory and sound each player wants.

Two weeks ago, PXG added to the Gen 4 family with the company’s third ST model (the second was this February’s 0211 ST), which as the acronym suggests, is aimed at a very limited number of golfers for whom forgiveness isn’t much of a concern. The ST looks much like you’d expect with thin top-lines, minimal offset and relatively short, progressive blade lengths (long irons are longer than mid-irons which are longer than the short irons). The long irons also feature a small cavity to increase the club’s MoI, giving them a degree of forgiveness.

The 0311 ST Gen 4 is designed to give elite golfers exceptional workability and, says PXG, ‘ultimate mastery’. The lofts are somewhat more traditional than those of the Gen 4 XP club whose 7-iron has just 27˚ of loft. The ST’s 7-iron has 33˚ while the PW has 47˚.