There are a number of significant differences between Cleveland Golf’s last driver and its successor.

It took a while for the Srixon/XXIO/Cleveland stable, owned by Japan’s Sumitomo Rubber Industries (SRI), to establish exactly how each brand would fit into the market. XXIO, founded by SRI in 2000, always built for the high-end/boutique sector, but its two siblings have morphed to varying degrees over the years.

Srixon Sports Asia, created by SRI as a distributor in 1996, began making golf balls under its own name in 2005. Two years later, Srixon introduced its first club – the WR game-improvement iron – and SRI purchased Cleveland Golf, one of America’s leading clubmakers which had earlier found success under Rossignol and Quiksilver’s ownership. Within a few years, however, Srixon had become the more prominent clubmaker with the release of the Z Series irons, while Cleveland evolved into the short-game specialist on the back of its hugely influential 588 wedge (the company’s fifth wedge design and introduced in 1988), coming out with the RTX (1-4), CBX (1-2), Zipcore, SmartSole, 588 RTX, Full Face, etc.

In addition to its industry-leading wedges though, Cleveland resumed building woods and irons in 2017, since when it has settled on its position as the game-improvement wing of the family. Its irons – Launcher, CBX, HB Turbo, UHX – have fared relatively well earning a solid reputation, but the woods – 2017’s Launcher HB and 2019’s HB Turbo – failed to keep pace. The 2019 club certainly had its admirers as well as its share of tech with a high-COR cup face, HiBore crown, and counter-balanced shaft, but it strangely failed to impress the judges.

For 2021 then, Cleveland’s new driver would need to see some major alterations – changes that spoke directly to Cleveland’s target audience, the recreational golfer. The driver’s Moment of Inertia (MoI) would need a significant bump which it has earned mostly by growing in size. While both the HB Turbo and new Launcher XL are officially 460cc, the clubhead of the deep-face Launcher XL is actually 6.7% longer from front to back than its predecessor meaning an 11% increase in MoI to 5,200g-cm2 – the highest of any Cleveland driver.

The titanium crown of the new club is extremely thin which helps lower the Center of Gravity (CG) and, perhaps most notably, it’s traditionally shaped, not an inverted HiBore crown. The HiBore was all about lowering mass and CG, but it didn’t win any prizes for the noise it made at impact. The Launcher XL has a much more satisfying sound.

The third major upgrade is the addition of the Rebound Frame first introduced in Srixon ZX drivers late last year – ah, the benefits of close family ties. Cleveland describes the Rebound Frame as ‘Alternating zones of flexibility and rigidity (which) direct more energy into the golf ball for increased speed and distance on every shot.’ The middle of the face restitutes following impact (trampoline effect); the outer rim of the cup face is rigid; there is a layer of flexible material behind that; and the rear of the clubhead forms a final, rigid, casing. Cleveland says the build-up of energy effectively creates a bigger clubface and more speed which results, most likely, in extra distance.

An 8g counterbalance weight in the end of the grip (Cleveland calls it ‘Action Mass CB’) helps higher-handicappers avoid casting the clubhead and return it to the ball squarely more consistently. And an adjustable hosel enables golfers to alter the loft of the club from 9˚ to 12˚ in half-degree increments to optimize launch angle, distance, and shot shape.

The standard version is joined by two lightweight models – the Launcher XL Lite and Launcher XL Lite DRAW. By replacing the weighty adjustable hosel sleeve in the standard version with a bonded hosel, and using an ultra-lite shaft, both clubs are 12g lighter than the standard club and therefore enable you to swing the club a bit faster. Being so light does drop the MoI slightly, however – to 5,100 g-cm2. The golfer that fights a slice might benefit from the DRAW model whose clubhead is weighted and shaped to facilitate squaring the clubface.

All three clubs are also available in the Accuracy Build option which is an inch longer and removes the counterbalance weight as leaving it would likely make the head feel too light. You might lose a little clubhead speed with the Accuracy  Build and consequently a few yards, but you’ll probably hit more fairways.

Women have their own spec build too – the Women’s Launcher XL Lite which has a shorter shaft, customized flex profile, and different grip (Winn Dri-Tac Ladies). 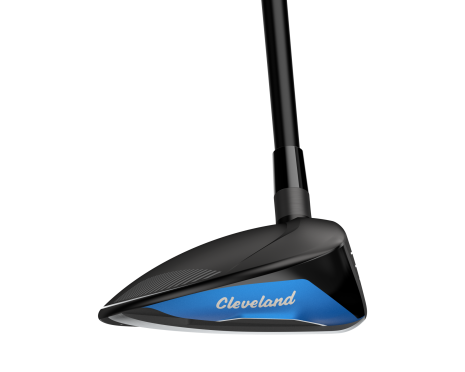 Launcher XL HALO Fairway-Wood
The fairway-wood (and indeed the Hybrid and Hy-Wood) is built with the same thinking and uses much the same technology found in the driver. Dustin Brekke, Cleveland Golf’s Director of Engineering, says it’s ‘the most forgiving and confidence-inspiring fairway-wood Cleveland Golf has ever made’. It features a larger head than the HB Turbo fairway-wood and a high MoI – 3,338 g-cm² in the 3-wood which is the highest ever for a Cleveland fairway-wood. Twin rails on the sole, called Gliderails, are designed to lower the CG and keep the clubhead square, and the same Rebound Frame present in the driver is here too, as is Action Mass CB. Unlike the driver, however, the HALO fairway-wood does possess a HiBore step crown to push the CG down and promote a higher launch. 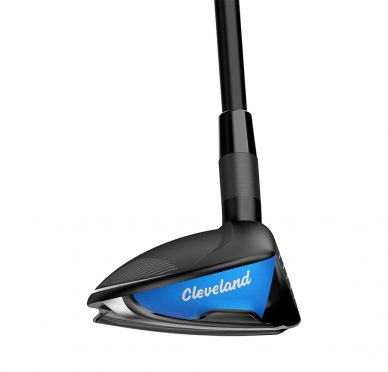 Launcher XL HALO Hybrid
The Launcher XL Hybrid features the Gliderails, Action Mass CB, Rebound Frame, HiBore crown step of the fairway-wood, and an MoI of 2,961 g-cm² – the most ever in a Cleveland Golf hybrid. 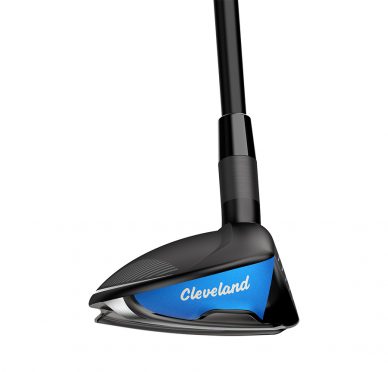 Launcher XL Halo Hy-Wood
The Hy-Wood is a hybrid of the hybrid – part hybrid but part fairway wood too. With 18˚, it has the same amount of loft as the 3-hybrid and 5-wood, but the shaft is longer than that of the 3-hybrid and shorter than the 5-wood’s. It’s 3˚ more upright than the 3-wood giving the golfer a little more confidence as he stands closer to the ball. At 143cc in size, the shape of the clubhead does give you the impression of a small fairway-wood, rather than a large hybrid. If you need some distance from the fairway but don’t do well with fairway-woods off the deck, the Hy-Wood is definitely worth a try.

The women’s fairway-wood, Hy-Wood and hybrid feature shorter shafts. The Accuracy Build option for the three clubs has half-inch shorter shafts for both men and women.
All clubs are available at retail on August 20th – this coming Friday!
clevelandgolf.com