For a company founded on the principles of perimeter weighting, higher Moment of Inertia (MoI) and, consequently, more forgiveness – basically clubs that made the game a little easier and suited more golfers than traditional blades ever could, Ping certainly has made its share of irons this century that look every inch the better-player’s club. Though it looked nothing like a blade, the i3 Blade appeared in 2000, and the ‘S’ Series began its run in 2003 with the S59 which no doubt astonished Ping loyalists raised on a steady diet of Karsten I, Eye, Eye 2, Zing, and ISI cavity-back goodness.

Like the i3 Blade, the S59 wasn’t really a genuine blade at all, but its dimensions were much closer to those of a player’s club than Ping’s previous game-improvement models. Its appearance was far ‘busier’ than the elegant, forged blades Mizuno, Wilson, MacGregor and others built, but the size of the cavity, thinner top line, narrower sole and overall clubhead size appealed to those lower-handicappers who could get their head around Ping’s apparent shift in philosophy.
Ping wasn’t really changing its philosophy though, rather just adding another string to its bow. And with every ensuing ‘S’ Series model – S58, S57, S56, S55 the company proved itself similarly as capable of making quality players’ irons as mid/high-handicappers’ irons (in the current line-up, the i500 and Blueprint and, to a lesser extent the i210, show just how adept Ping has become at making swoon-worthy clubs).

The iBlade stopped the flow of ‘S’ irons in 2016 and, just as the i3 Blade and entire ‘S’ Series had been, it was a blade in name only as it was cast rather than forged, possessed a cavity and came with a couple of other significant forgiveness-enhancing features. Its hollow body housed an elastomer insert, and a 23g tungsten plug was hidden in the toe of the club. So while it had ‘blade’ in its name and certainly was an attractive club, it was probably just about the most forgiving blade any committed blade-user had ever hit.
Ping’s new i59 iron, announced last week, replaces the iBlade and comes with a couple of discreet changes plus a few that are quite apparent. The first invisible difference is the addition of AlumiCore – an aluminum insert in the club’s hollow body that improves the feel of impact and which is a third as dense as Stainless Steel which allows for the other veiled difference – tungsten weights in both the toe and heel that give the i59 the same impressive MoI as the i210.

The changes you will notice are the fact the body of the i59 is forged from 1025 soft carbon-steel while the face is high-strength 17-4 Staines Steel; the grooves are more tightly packed together meaning there are four more of them, and the groove walls have been altered to prevent fliers with short irons but maintain long-iron spin; and, probably the most conspicuous difference of all – the price. These bad boys are not cheap. 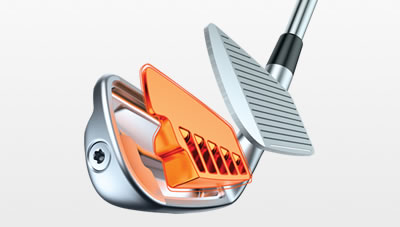 $275/club (steel), $290/club (graphite)
Lofts – As has become the norm for Ping irons, there will be three loft options – Standard, Retro and Power.  The Standard 7-iron has 34˚ of loft. The Retro has 36˚, and the Power 32˚. The Standard PW has 46˚, while the Retro has 48˚ and the Power 45˚.
Shafts – Project X LS, Ping AWL 2.0 (steel), PING Alta CB Slate, Alta Distanza Black 40 (Senior only) and UST Recoil (other options are available at no extra cost).
Available in right and left-hand.
Available for fitting and pre-order now, and at retail later this month.
ping.com