The company Karsten Solheim founded on the principle of increasing perimeter weighting (and consequently Moment of Inertia) introduces its latest line in which forgiveness is king.

Speed, looks, aerodynamics, adjustability, acoustics, feel, shot bias, shaft options, and game-tracking all get a mention in our report on Ping’s new G425 family, but the most consistent message you’ll hear is forgiveness. The Arizona-based, family-owned company built its reputation in the late 1950s and ‘60s by creating putters and irons that were far more player-friendly than the ubiquitous, one-size-fits-all blades offered by others and, though phrases like ‘Optimized MoI’ and ‘Retain balls speeds across the face’ are more in vogue nowadays, the word ‘forgiveness’ still resonates.

The G425 Max has big shoes to fill. Going back over 15 years to its first G Series driver (G2 which offered a 7˚ version), and especially so with its two most recent models – the G400 Max and G410+ – Ping has cemented its reputation for creating forgiving clubs with high MoIs. The 460cc G425 Max beats them all, boasting the highest MoI in company history – about 14% higher than that of the G410 (it’s actually at its highest when set in the ‘draw’ position).
A whopping 26g tungsten weight at the rear of the sole is largely responsible, dropping the Center of Gravity (CG) so deep and far back in the head the total MoI of the G425 Max pushes an astonishing 10,000. Using that much tungsten (which can be set in ‘neutral’, ‘draw’ or ‘fade’ positions) was made possible by saving weight in the ultra-thin Ti 8-1-1 crown with a new internal Dragonfly design (note, while most other manufacturers now use carbon-fiber in the crown and sole to save weight, Ping continues to construct all-titanium heads).

The face material is the same forged, thin, strong Ti9s+ Ping has used for years. With so many face ‘stories’ happening elsewhere in the industry, it is telling that a company well-known for leaning more on genuine technological/engineering/design advances than marketing flash before introducing new products would stick so resolutely to an ‘old’ story. ‘If it ain’t broke…’ would work well as a Ping slogan.
The turbulators atop the G425 Max’s crown are very slightly different to those on its predecessors’ though Ping admits it’s more of a cosmetic thing than technical and that while no performance was lost, the aerodynamic gains are negligible.

Something that has changed however and which has had a positive effect is the new rib structure inside the Ti 8-1-1- body which creates a satisfying, deep thwack.
Trajectory Tuning 2.0 features a lightweight, aerodynamic hosel sleeve that provides eight possible positions  – 1.5˚ loft adjustability up or down.
Looks-wise the G425 Max is all-business. The hulk of the backweight on the bottom together with turbulators on top give it an overall busy, almost muscular look enhanced by the slate/black (actually slate/stealth) color scheme on the sole. It looks plenty powerful, but this is Ping remember…forgiveness first. 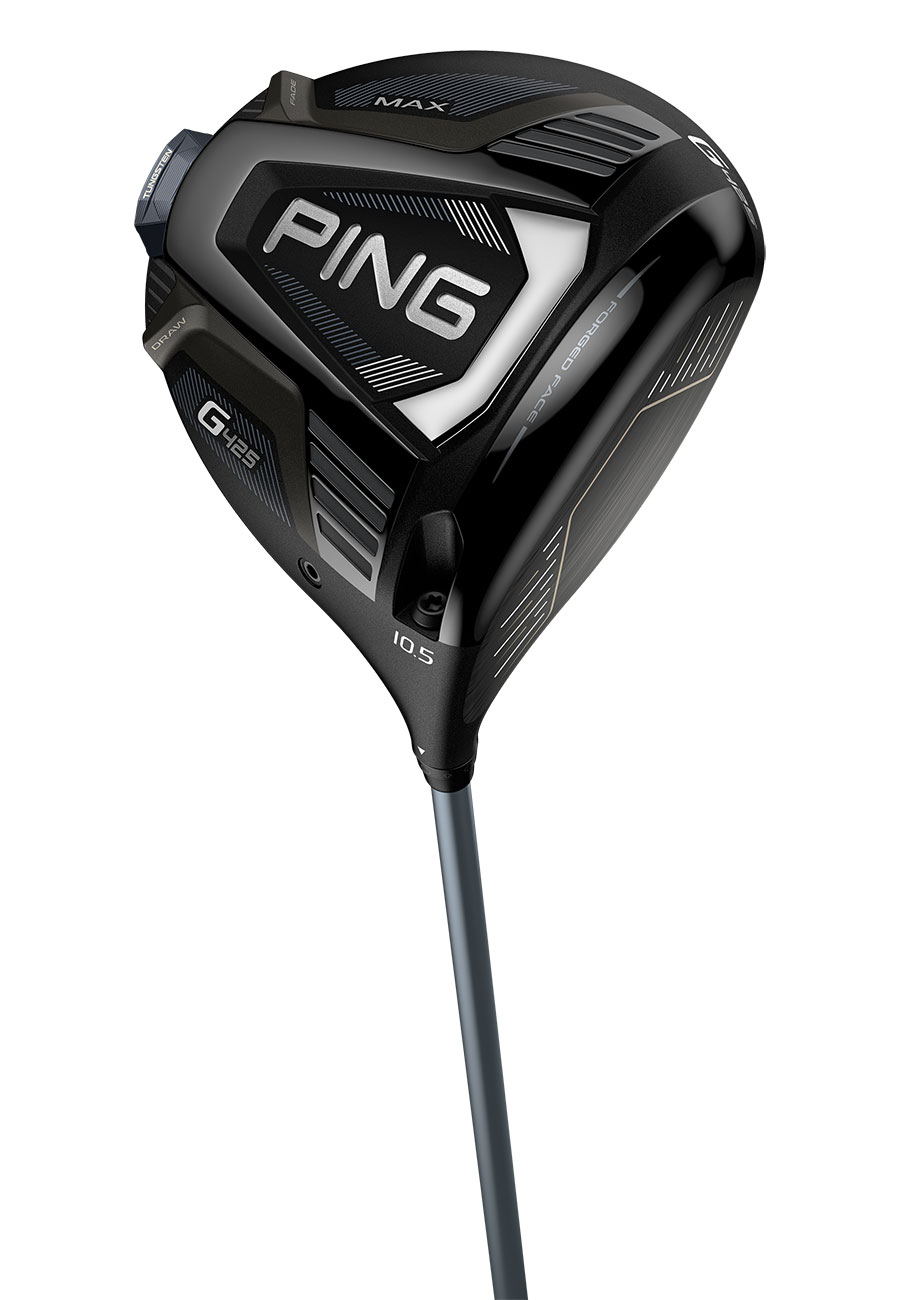 The pear-shaped, 445cc LST generates significantly less spin than the G425 Max and a flatter trajectory which will make it a popular choice with better players. The tungsten backweight weighs a mere 17g resulting in an MoI of about 5,100 which is ample for the more consistent ball-striker. 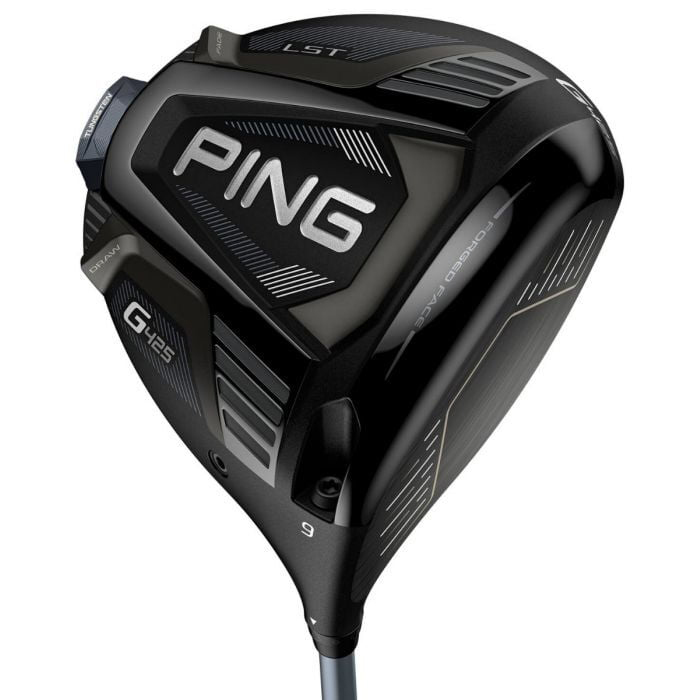 The 460cc SFT (Straight-Flight Technology) is the draw-biased model whose tungsten weight weighs 23g and is positioned at about 8 o’clock on the sole (as you look directly at it) – closer to the heel than it is when in the ‘draw’ position on the G425 Max. The lighter swingweight (D1, not D3) also helps correct ball-flight. 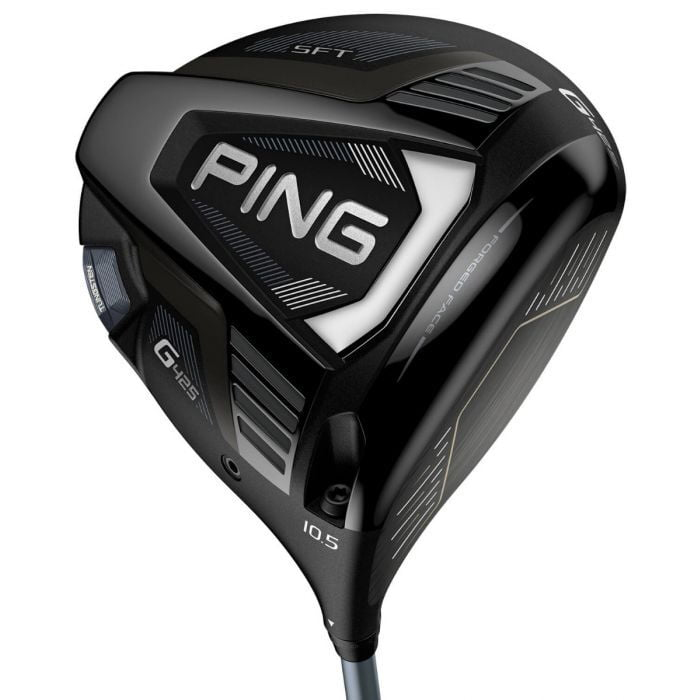 The Maraging Steel Facewrap in which thinner, high-strength steel wraps into the stainless steel crown and sole, is designed to result in higher ball-speeds and increase launch angle. A highly-engineered face – lower part has slightly less loft, higher part slightly more – seeks to keep spin consistent no matter where contact is made (Ping calls this Spinsistency); the hosel sleeve gives 1.5° of loft adjustability up or down, and three dots on the crown have been added to aid alignment. A tungsten backweight pushes the CG low and deep for a high MoI. 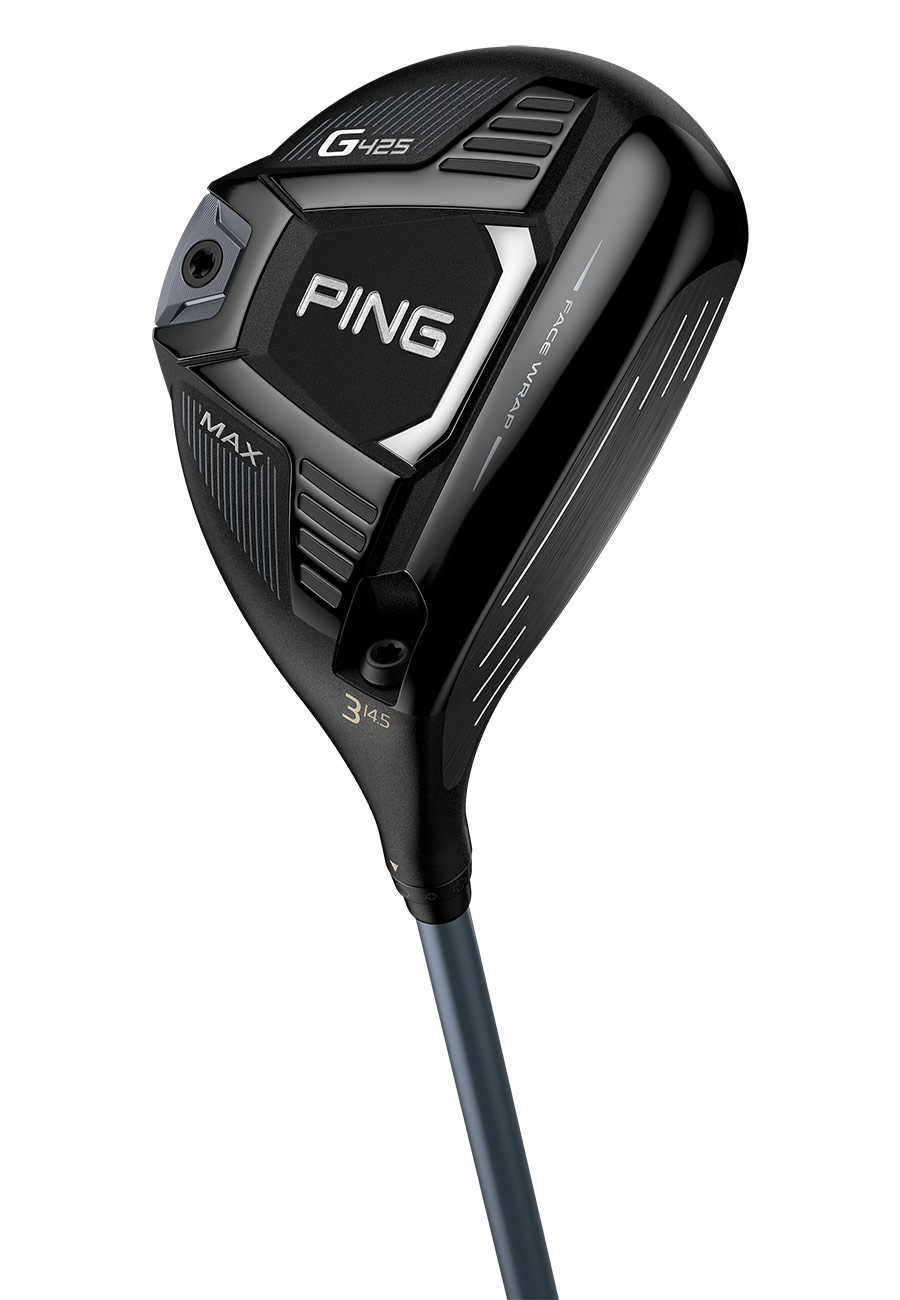 A smaller head and the position of the CG make the LST the lower-launching, lower-spinning (it generates about 200 rpm less spin than the G410 LST, and roughly 450 rpm less when contact is made low on the face thanks to Spinsistency) model. Adjustable hosel sleeve. 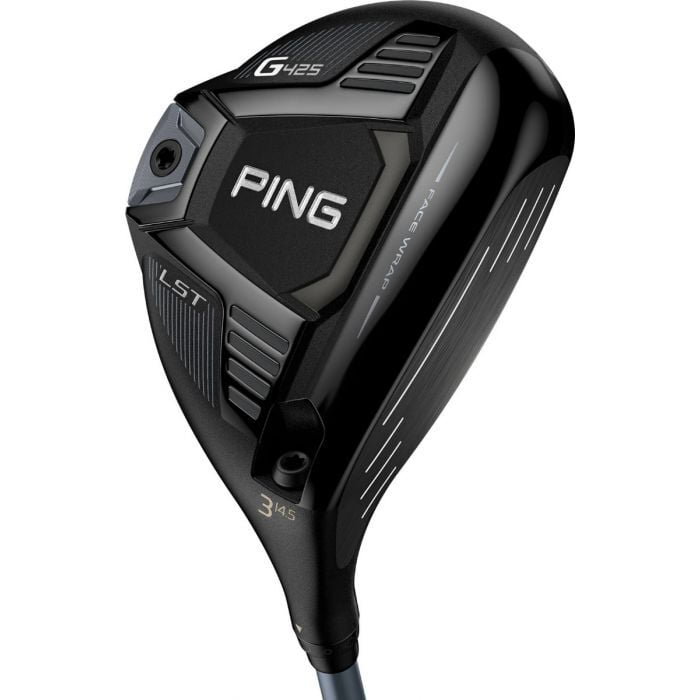 A larger head and tungsten weight positioned to effect a draw will make this the popular choice with game-improvers looking to eliminate their slice. Adjustable hosel sleeve. 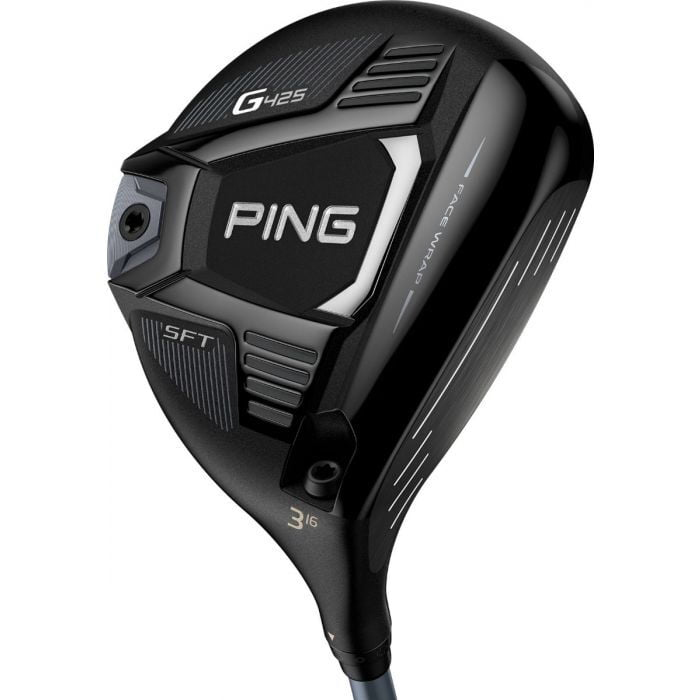 The Spinsistency and Facewrap innovations found on the fairway-metals are also present on the hybrid which likewise features a backweight to increase MoI. The three-dot alignment guide is here as is the adjustable loft sleeve. 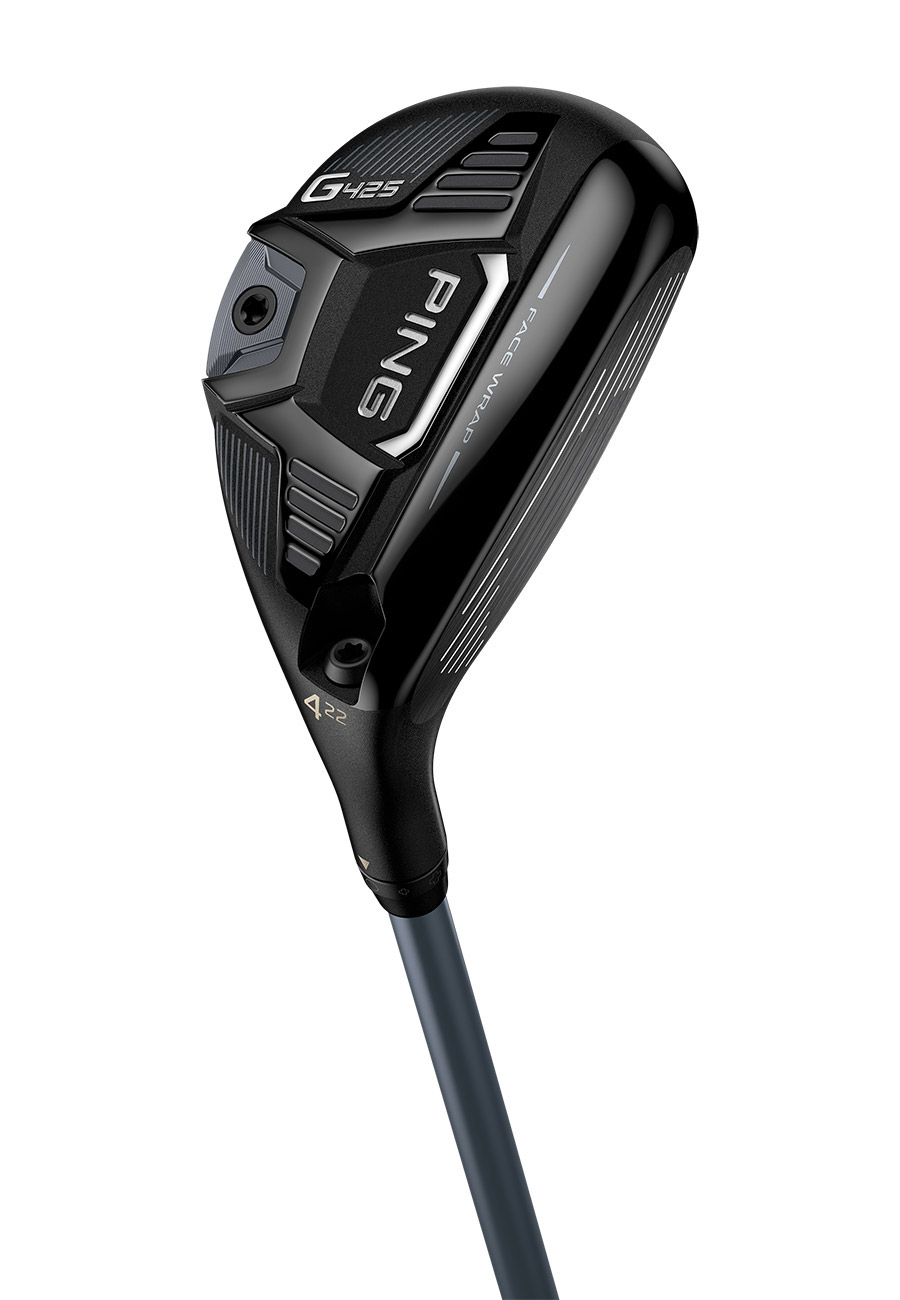