They may not be radically different from last year’s models – merely updates and improvements. But anytime new drivers from TaylorMade and Callaway appear on the USGA and R&A’s conforming clubs lists, the driver battle is rejoined. For now though, information is thin on the ground.

Depending on which cliché you prefer, a picture tells either a story or a thousand words. But while photographs of the highly-anticipated Callaway Epic Speed (and siblings) and Epic Max (and siblings), and TaylorMade SIM2 line that now appear on the USGA and R&A’s Conforming Driver lists certainly do tell a story, it’s doubtful even the most devoted gearheads perusing the lists could muster 1,000 words on any one of them.

The fact they can all be seen on the lists means they can be played by pro tour staff, so expect to see a number of them at this week’s Sentry Tournament of Champions in Hawaii and later at the Abu Dhabi HSBC Championship in the United Arab Emirates before their likely release date later this month.

Until then, and until I lift information embargoes, those photographs are really all we have to go on.

The first thing readers will notice about the Epic Max is probably the number of Jailbreak ports there are. Jailbreak, of course, is the technology Callaway introduced four years ago on the Great Big Bertha Epic Driver that sought to stabilize the clubface at impact and increase ballspeeds by way of titanium rods connecting the crown and sole. Originally there were two rods, and that number remained constant through last year’s Mavrik Driver. On the Epic Max, however, we see four. It’s probably safe to assume doubling the number of Jailbreak rods is going to significantly increase stability, though it remains to be seen what effect this will that have on ballspeeds.

Elsewhere on the sole, we can see what looks like a carbon composite piece in the toe. The original Epic featured three carbon sole pieces that took up roughly 50%  of the sole, so the position of the Epic Max’s carbon piece is interesting. There are no published pictures yet of the crown so we can’t be certain what material it will be, but carbon composite is a pretty safe bet.

Also stamped on the sole are the words ‘Jailbreak AI Speed Frame’. Callaway first leaned on artificial intelligence to help design faces on the Epic Flash, a supercomputer running thousands of scenarios to determine the face’s optimal thickness. It appears AI is now being used to optimize Jailbreak.

And we can see an adjustable sliding weight at the rear, adjustable hosel, and the overall shape appears similar to the Cyclone shaping of the Mavrik. 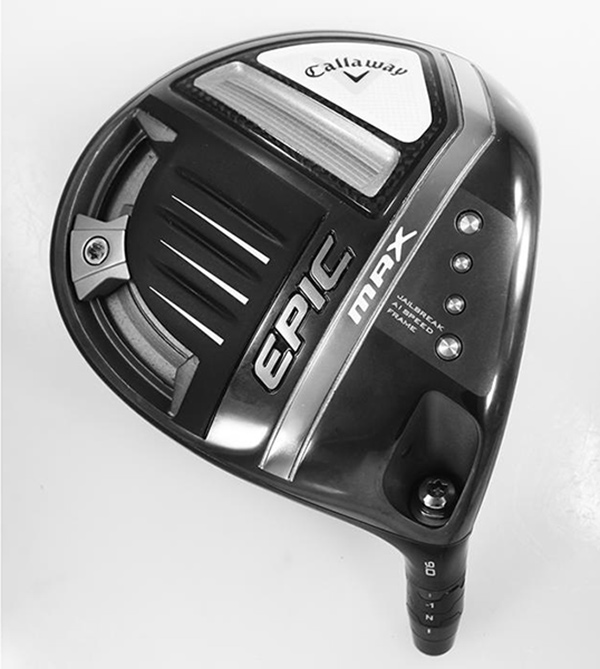 It’s not immediately apparent perhaps, but look long enough and you’ll see the shape of the LS (presumably Low-Spin) is actually slightly different to the mother club. It’s a little more compact so we suspect this might be favored by better players. 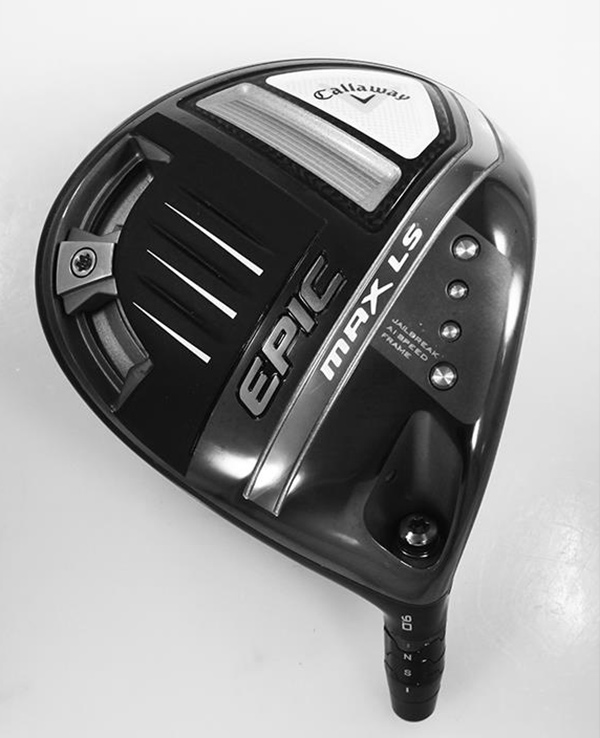 The obvious difference between the Speed and the Max is that instead of an adjustable sliding weight at the rear of the sole, the Speed has a single weight which will surely push the Center of Gravity (CG) low and back and allow fitters to adjust the club’s swingweight. The four Jailbreak ports are present as is the carbon composite toe. Losing the sliding weight means the Epic Speed will be lighter which means faster. Speed with an increased Moment of Inertia (MoI) suggests this club will be popular with mid-high handicappers. 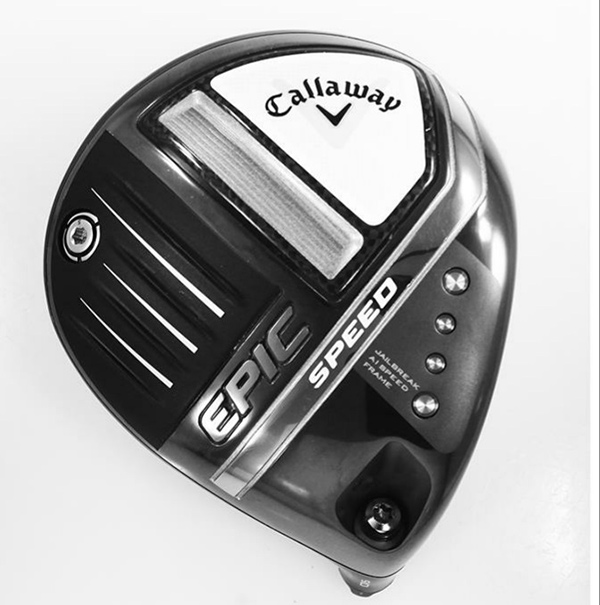 Only two Jailbreak ports instead of four and an adjustable front weight as well as one at the rear distinguish the Epic Speed DS, LS, and Version 2. The adjustable weights will allow fitters to move the CG to determine launch angles. Will be interesting to learn the reason why these versions have only two Jailbreak ports – in all likelihood to allow for the front weight. Speculation is these clubs are specifically made for certain staff players.

It’s also worth noting that the SS20 face material of the Mavrik (SS stands for ‘Super Strength’ – actually an FS2S titanium alloy) has become SS21 for the Max and Speed drivers. The original SS face was six grams lighter than previous Callaway faces but stronger. We doubt the upgraded face is any heavier but we’re assuming it is stronger.

The 2021 SIM has a similar shape to its year-old predecessor though the raised (lowered?) central panel does not seem so pronounced. The sole slot ‘Speed Pocket’ is present, allowing the lower part of the face to flex. There is an adjustable hosel, and an apparently removeable weight near the front of the sole on which the words “High MoI, Low Spin” are written. And though it could possibly be a cosmetic illusion, it does appear the majority of the sole is a carbon composite unlike on the original SIM which had a couple of carbon panels either side of the protruding central section. The word ‘Injected’ is visible toward the toe, signifying that material has been added to the clubhead to ensure it is as fast as the rules allow and don’t exceed Characteristic Time (CT) limits. 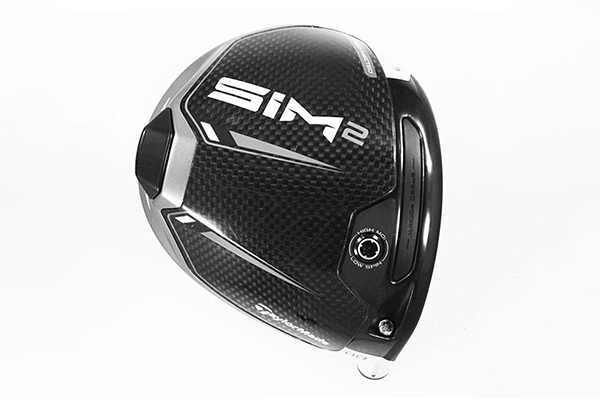 There looks to be precious little difference between the SIM2 and SIM2 Max, though the sole weight is definitely a little closer to the heel on the Max suggesting it will have a draw bias and facilitate a right-to-left ball-flight. 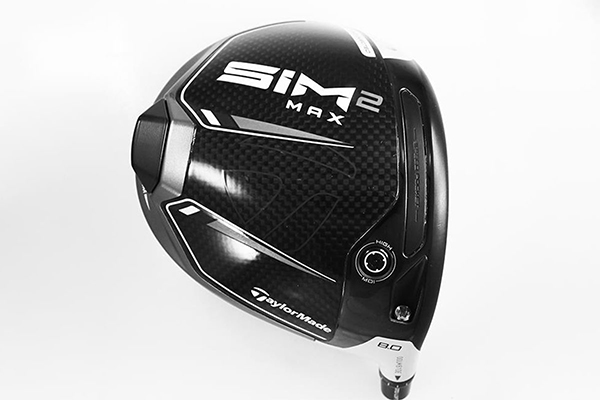 As the name suggests the draw bias is likely to be maxed out with this club as the sole weight is positioned in the heel, close to the hosel. 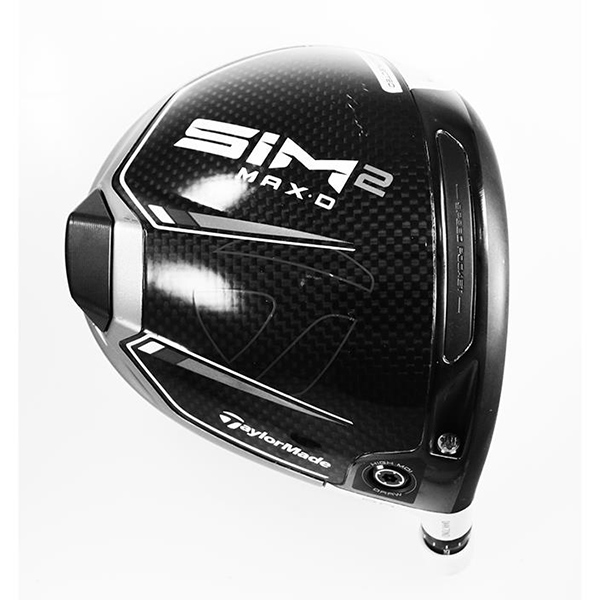