Nobody Beats the Wizz

Keith Rogers isn’t a golf pro, but he plays one on TV. Not quite, but the Littleton native does appear in an infomercial for his invention, the SwingWizzard— a training aid so effective that world-renowned instructor Jim McLean endorses it and uses it at his schools. “The first time I saw the SwingWizzard, I was sold,” McLean says. “You can see how the shaft is working, the positions you need to be in to develop a consistent strike.”

Rogers says he was consistent—consistently bad, a 20 handicap—but a determination to get his swing on plane sparked an epiphany. By joining two clubs together at the grips, he created a mirroring device that enabled him to see and feel the club position on his backswing and downswing. Using a pair of aimsticks on the ground to reference club position throughout the takeaway and back through impact, he grooved his swing over the course of a winter. A few months into the season, he sported a 4 handicap.

“The SwingWizzard isn’t meant to hit balls,” Rogers says. “Involving balls would take away the intent. It is supposed to help you build your swing mechanics, developing a kinesthetic sense—a feel—of your proper swing plane.” Which is why you should do the following drill deliberately and repeat it over and over. 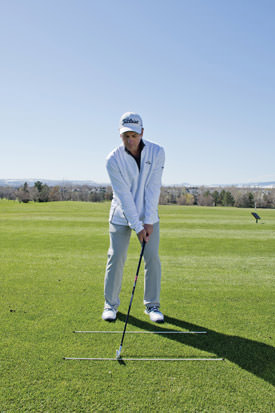 1. SET UP – with a pair of aimsticks on the ground pointing to your target. 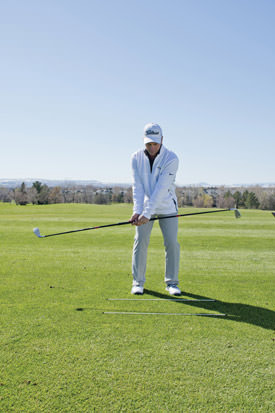 2. TAKEAWAY – Slowly initiate a one-piece takeaway, keeping the clubhead on line with the aimstick. 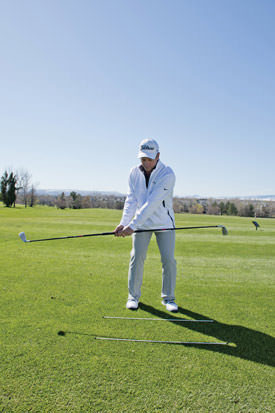 3. HALFWAY BACK – Using the aimsticks as your guide, check the entire length of the SwingWizzard to make sure your club is parallel to
the ground. 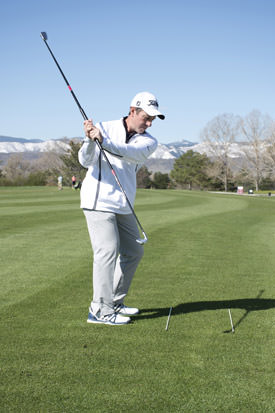 4. BOTTOM CLUBFACE PARALLEL – Instead of looking behind you to check club position, you can gauge it by the bottom clubface. 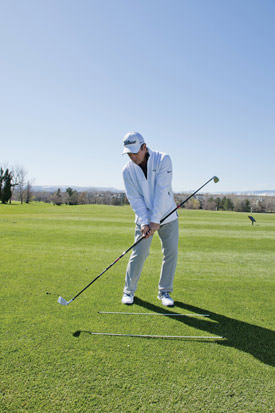 5. WEIGHT TRANSFER – During the weight transfer initiated on the downswing, keep the position of the bottom clubface aligned to the aimstick. 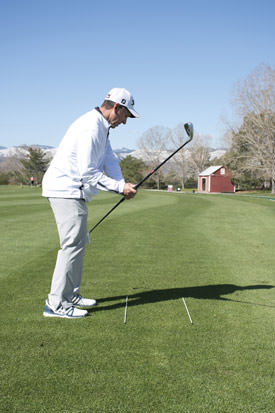 6. WRIST HINGE – The weighting and balance of the product naturally moves you into the right position. Just let the club drop and fall back into the impact zone, notice the parallelism of the SwingWizzard and the ground. 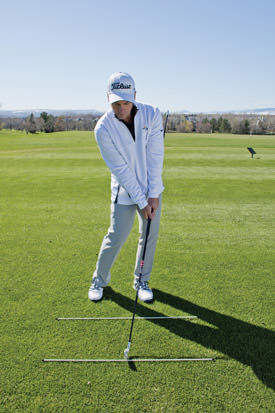 7. IMPACT – As you go through the point of impact, if you break down, flip your wrists or chicken-wing it, the other end of the club will remind you not to. It will not allow you to flick at the ball.

This spring, Rogers debuted the Chip Wizard, which attaches to the Swing Wizzard and encourages the proper hands-forward position required for accurate chip shots. He also came up with the three-piece Wizard Putting System. 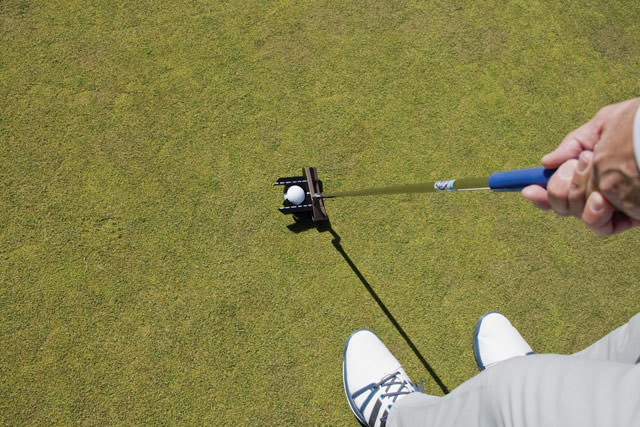 1. Tour Stroke: An attachment to a putter face that cradles the ball so it releases correctly, promoting a long, smooth stroke.

3. True Line: a string alignment tool that creates a visual path to the hole on breaking putts.

Chances are, like the Swing Wizzard, you’ll be hearing—and seeing—more about all these products.