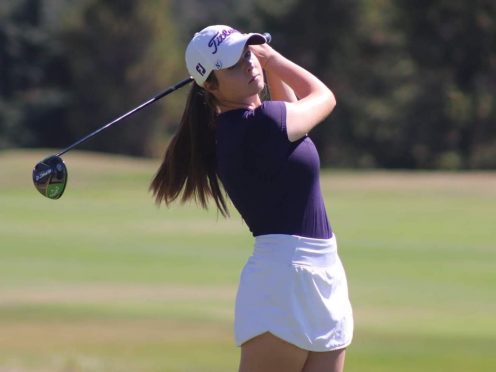 Kent Denver senior’s win in Montana is special in every way.

That changed Monday at the AJGA Junior at Big Sky in Big Sky, Mont.

Clad from head to toe in purple and white—the colors of Northwestern University, where she has verbally committed to play golf next year—Hillary fired rounds of 69-66-68 to finish 13-under-par and six shots clear of runner-up Lauryn Nguyen of Seattle.

Her 203 total represented a 16-shot improvement over the 3-over-par 219 she posted in the same event last year. That score earned her a spot in a three-way playoff for first place, which she lost to Washington’s Montgomery Ferreira.

“The weather was exactly the same as last year,” Hillary explained.  “Nothing had changed except the greens, which weren’t holding well last year. This year they were more receptive.”

They certainly were. In the final round, Hillary hit all 18 of them in regulation, leading to four birdies in a bogey-free round of 68. “I had no stress whatsoever,” she said, “except for having to make a par putt on 18 to get low round of the day.”

Hillary put herself in that enviable position in Sunday’s second round.

She’d started the day three shots ahead of Nguyen, with whom she was paired, but the 16-year-old was on fire, carding six birdies on her first nine holes.

Hillary, however, countered with four birdies of her own, and “was banking on the fact that Lauryn had never gone that low.”

She hadn’t and she didn’t. Nguyen went two-over the rest of the round, while Hillary stretched her lead to five shots on the steam of four birdies and only two bogeys.

First time victories are kind of a
B I G deal around here. #BigSkyJr pic.twitter.com/m9f09c1DAS

With school starting, she’d spent the 15 days leading up to the tournament hard at work.

After finishing a dismal T-62 at the Swinging Skirts AJGA Invitational at Stanford on August 15, she dedicated herself to improving her stamina and mental game.

“I worked out every day after school,” she says, following a regimen from her trainer, PGA Professional Alexandra Braga of Denver Country Club. She also spent time working on short-game mechanics at Castle Pines Golf Club with PGA Professional Don Hurter, her longtime golf coach and former AJGA champion.

“I felt much stronger, mentally and physically,” Hillary says of her approach in Montana. “I wasn’t overthinking it. I felt tournament-ready.”

Hillary’s intense commitment to golf comes as no surprise when you consider she carries a 3.90+ GPA at Kent Denver, where she’s enrolled in four AP classes and involved in mock trial and other activities.

She also carries a sense of responsibility to the game that extends beyond the course.

To support the organization’s efforts, this year she signed up to participate in the AJGA’s Leadership Links Program, wherein she solicits donors who pledge money for every birdie she makes.

Fifty percent of the money helps fund the AJGA’s Ace Grant, which provides financial assistance to young men and women who aspire to earn a college golf scholarship through competitive junior golf.

The other 50 percent goes to a 501(c)(3) of the player’s choosing—in Hillary’s case, The First Tee of Green Valley Ranch.

The philanthropic significance of those birdies, she says, motivated her to stay aggressive when she had the Big Sky Tournament well in hand.

It represented big win for her, the AJGA and The First Tee of GVR.

She admits there’s another incentive as well: “The top eight fundraisers get to play with Rickie Fowler November 22 at The Medalist Club in Hobe Sound.”