A Crabby Christmas to All 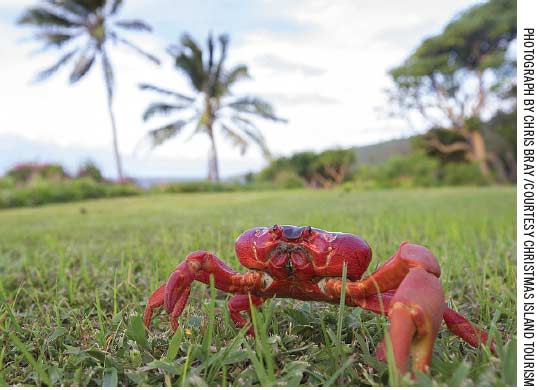 And to all a rare sight of Australia’s singularly endowed Christmas Island.

IN THE SPIRIT of the season, we present Christmas Island Golf Club. Known for its uneven lies and teeny greens, the par-64 course lies on the northeastern edge of an Australian external territory that’s geographically closer to Indonesia than the motherland. The course dates to 1955 and borders the Indian Ocean and a tropical jungle cleared by an Australian prisoner of war, Jack Pettigrew, during the island’s Japanese occupation in World War II. 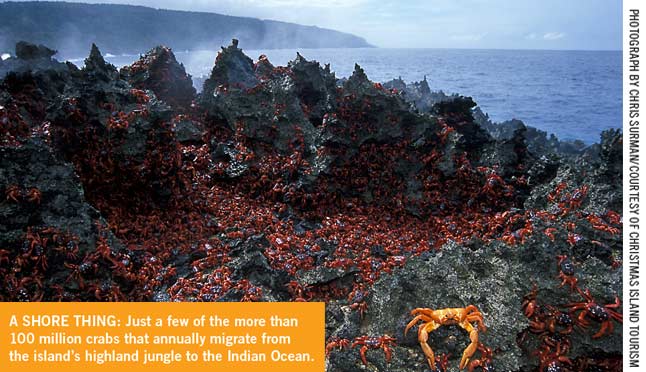 Invaders of a different species arrive on the course and throughout Christmas Island’s capital, Flying Fish Cove, during November and December. In one of the most eye-popping natural processions on earth, an estimated 100 million red crabs migrate from the highland rainforest to the northeastern beaches to procreate, then return with innumerable minuscule offspring, each measuring less than .20 inches. The crimson swarms swathe highways, yards and even homes, as residents give the protected species right of way.

Road closures and specially constructed bridges and culverts ease the annual pilgrimage. Golfers time their arrival and departure from the course to avoid the red waves that carpet the fairways and greens, creating a rather Christmassy—if chaotic—color scheme. Players gently move their wee mates along when they invariably stand in their lines. The red crabs rarely steal balls. That’s the job of the island’s huge robber crabs—whose pincers can crack open a coconut as easily as a red crab—and the Christmas frigatebirds, which tend to use hats, balls and even clubs for their nests.

These are just a few of the dozens of species of wildlife and vegetation found only on this 52-square-mile island. With Christmas Island National Park covering 70 percent of that area, ecotourism thrives (within the national park nestles the luxurious Swell “eco-lodge”). 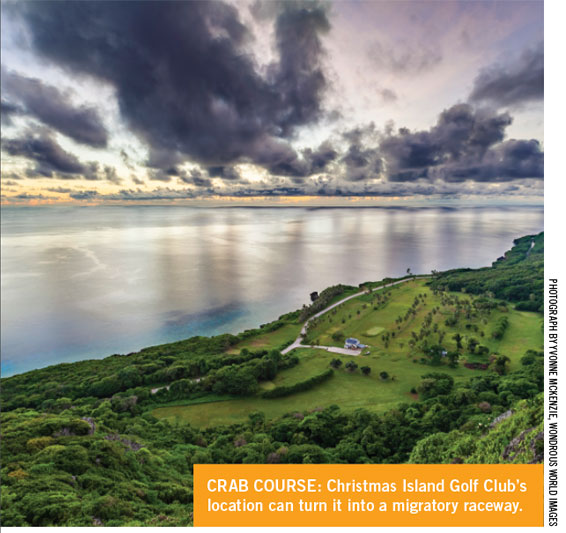 Many also come for the fishing and diving. Within a mile of the shoreline, schools of tuna and wahoo race one another with fishing boats in hot pursuit. Below the water, a tropical reef laced with unspoiled corals and rare marine life draws snorkelers. And scuba enthusiasts plunge from the sheer drop-offs at the reef’s edge for a chance at glimpsing the world’s largest fish, the benign whale shark.

Captain William Mynors of the British East India Company sighted the island on Christmas Day, 1643, giving it its name. Seeing the remote location for yourself, however, requires multiple layovers and thousands of dollars. While playing the golf course and staying at nearby Christmas Island Resort probably isn’t reward enough for such an outlay, when you take into account an environment brimming with uniqueness, this speck in the Indian Ocean transforms into a must-see natural wonder. christmas.net.au