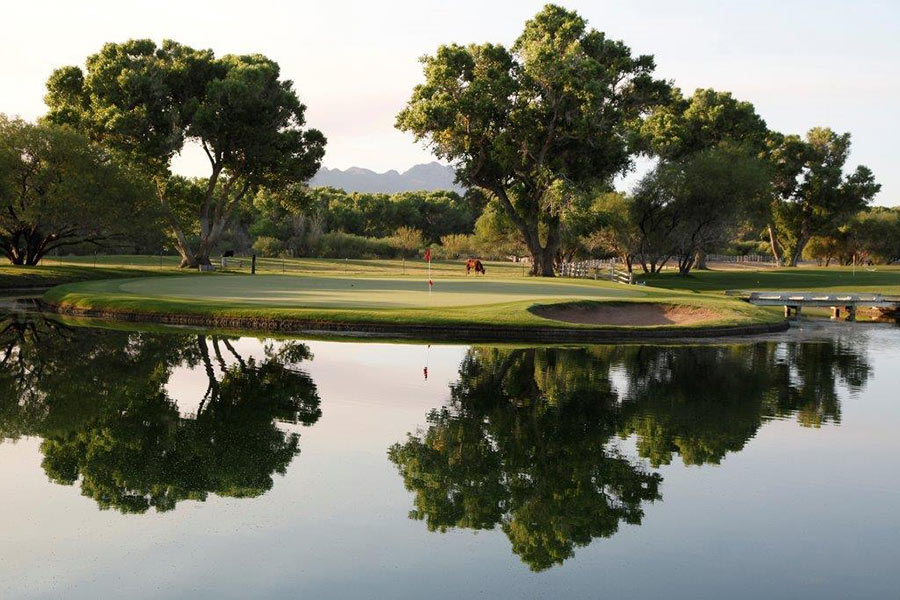 Journey to Tubac for a complete reset among the foothills of the Santa Rita and Tumacacori Mountain ranges.

Built on the Otero Family ranch, the site of the original Spanish land grant in Arizona, dating back to 1789. The resort itself was built in 1959 by a partnership including Bing Crosby, to provide a nice place for Hollywood stars who were filming westerns in the nearby San Rafael and Babaocomari Valleys.  Over 60 western movies were filmed in this area.

In 1995 and 1996 many scenes from the movie Tin cup were filmed at the resort.  There are signs on #3 and #4 on the Rancho course commemorating those scenes.

This hole was the location for the famous scene early in the movie where Kevin Costner aka Roy McAvoy, as Don Johnson’s caddie, goads the pros (Craig Stadler, Don Johnson, Gary McCord, and a very young Phil Mickelson) into going for the green over the lake, on their second shot.  Craig Stadler takes the bait, tried the shot and drunks his ball, disgusted.  At everyone’s urging, Costner tries the shot and makes it on the green, and is immediately fired by Don Johnson.  The spot where the shot was taken, which is from 240 yards out, is marked by the plaque on the right side of the fairway, so you can try it yourself!

On this tee box, as Kevin Costner aka Roy McAvoy is trying to qualify for the US Open, he demands the driver from his caddie, Cheech Marin.  Marin refuses, advising the 2-iron as the safer play.  Things heat up and finally Marin breaks the driver in half!  Costner proceeds to break every other club in the bag in half except the 7-iron, which he uses to complete the round.  He does not qualify for the Open!  We do not recommend this course of action.

Don Johnson challenges Kevin Costner to a “Who can hit it the longest” contest.  Costner chooses 7-iron (all he has…see above)!  Costner hits a great shot out onto the range, confident of victory.  Johnson hits his own shot down the entry driveway, bouncing forever toward the arch…and wins Costner’s Cadillac El Dorado.

Several other bar scenes were filmed here, though with the resort remodel in 2005 and 2006, the exact locations have changed.  The famous finishing hole scenes in the movie, where Costner loses the US Open by taking many shots and finally makes it over the water, which was filmed at the Kingwood Country Club outside of Houston, TX.

Enjoy dining in Stables Ranch Grille open for breakfast, lunch and dinner offering southwest cuisine and a nice wine list.  Enjoy the patio with great mountain views or the adjoining bar featuring artifacts and resorted saddles that serve as barstools.  Live music is featured every Friday and Saturday night.

The Spa & Salon is always a treat featuring an array of services and state-of-the art amenities, all thoughtfully designed with a Southwest flair with your needs in mind.

The resort is located 35 miles south of the Tucson International Airport and 20 miles north of Nogales, Mexico; adjacent to the historic Village of Tubac.

Want to read more about golf in Arizona? Visit our TRAVEL ARIZONA Page.