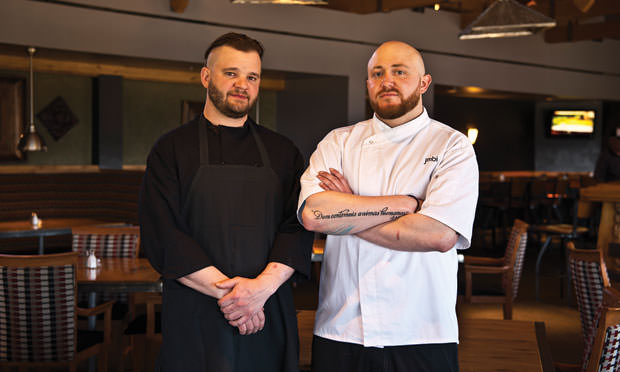 For folks who can’t access the exclusive experience of Castle Pines Golf Club, the Ridge at Castle Pines North provides a member-for-a-day alternative. Arizona-based Troon Golf manages the facility with its Tom Weiskopf-designed public course, and since 2004, it has been owned by the Park family—notably Grace Park, who won the 1998 U.S. Women’s Amateur, was the LPGA’s 1999 Rookie of the Year and triumphed in six LPGA Tournaments (including one major, the 2004 Kraft Nabisco Championship).

Grace retired from golf in 2012, and her father, Soo Nam Park, is a successful South Korean restaurateur and food distributor. So it’s fitting thatThe Ridge renamed its restaurant Park Place, with Grace’s silhouetted swing serving as its logo.

The Ridge occupies an alluring slab of Front Range foothills, and the restaurant has attracted community members with the best outdoor patio in town—a panoramic mountain view sandstone rock formations and Ponderosa pines. But PGA General Manager Daniel Kane had to take a closer look at the food-and-beverage operation, a critical service element at all golf clubs. While always superb during tournaments, the restaurant had become inconsistent—too busy when open, closing at arbitrary times and other issues.

“We are re-engineering the bigger-picture issues to win back customers,” he says. “You like the Troon golf experience; now you get the Troon dining experience.”

It requires talent in the kitchen, and Park Place has gotten ahold of Jordan Isaac as executive chef. An outstanding athlete as a teenager, Isaac found himself not playing sports any more at age 21. He launched himself into backpacking abroad and found kitchen jobs—“Not because I love to cook, but because I love to travel.” He soon found himself working as a private chef in Amsterdam and just kept going. “French chefs spoke to me in French, and I didn’t understand a word of it,” he says with a chuckle. “But as a private chef, you’re allowed to try things and fail and do it again.”

Isaac’s approach is the K.I.S.S. principle—fresh ingredients, prepared authentically and professionally. The new menu offers great snack choices. The superlative House Made Pretzel Knots are comfort food at its best, warm and buttery homemade dough shaped into bites, with a glorious cheese sauce kicked up by a little pepper jack melted in. The knockout Nachos hardly qualify as an appetizer. A novice might balk at $16 (adding chicken or beef) for what is usually deemed plebeian fare…until the super-grande, platter appears, fully loaded with hearty toppings.

Isaac makes an ideal Colorado Beef Burger, a fresh grind with the right fat content, cooked for maximum juiciness and slid onto a potato bun with red onion, tomato and cheese, then upgraded with butter lettuce and a rosemary garlic aioli. His Buffalo Chicken Sandwich, a clubhouse staple, is nothing to cluck at. The thick spicy cutlet comes in ciabatta stuffed with plenty of Maytag blue cheese and pickled serrano peppers.

Of course, Isaac cuts his own steaks and fish filets (he learned butchering as a chef at the ultra-private Wigwam Club in Deckers—by watching how-to videos on YouTube). The Grilled 10 oz. NY Strip’s depth of flavor is defined by his red wine demi-glace, a rich and concentrated brown glaze achieved by the luxury of time—20 hours to roast veal bones, to gently simmer and slowly reduce chicken stock, aromatics and a bottle of red. Technically a classic French sauce, it’s a recipe he learned on Mount Kilimanjaro! The tender and juicy cut of beef arrives with herb-roasted potatoes and oven-roasted Brussels sprouts finished with a sauté in duck fat, a wildly delicious enhancement (with no milk solids to burn at high heat, it gives the veggies an excellent sear).

The flavor of the Chicken Schnitzel—breaded, seasoned and fried to golden, crispy refinement—takes it beyond the average recipe. It’s served with generous helpings of mashed potatoes, sautéed green beans and old-fashioned bacon gravy, putting some South in your mouth! The Grilled Salmon with dill sauce and couscous gets a thumbs-up, as does the Ballerina Pasta Plate with grilled vegetables and pesto Alfredo sauce. (Opt to add shrimp for a protein boost.)

For dessert, a Chocolate Chip Cookie Sandwich achieves perfection in its simplicity—vanilla bean ice cream in a buttery soft cookie with a chocolate fondue drizzle and dipping sauce.

Isaac will ramp up the monthly menu offerings as the golf season progresses, and he’s anxious to explore themes (a Thursday “game night” with elk steak on the menu) and sourcing (fresh Maine lobster for lobster rolls and a lobster mac and cheese—when he starts talking about smoked gouda, house-made bread crumbs and traditional jumbo macaroni pasta, it’s true love).

The redone dining room at The Ridge

So the Ridge is using a mulligan to make Park Place a focal point of the entire community. The food gives them a chance. So does a more upscale ambience created by new wall colors, carpeting and lighting. Grace Park’s silhouette appears on all branding, and plans call for a monthly farmer’s market to which everyone is invited.

New front-of-house management (Dawne Glinski, formerly of Perry’s Steakhouse) has resulted in timelier service, and if The Ridge makes good on other plans—a bigger bar, a fire pit for the outside—it will lower its handicap even further. Bring on the “scratch eaters”!