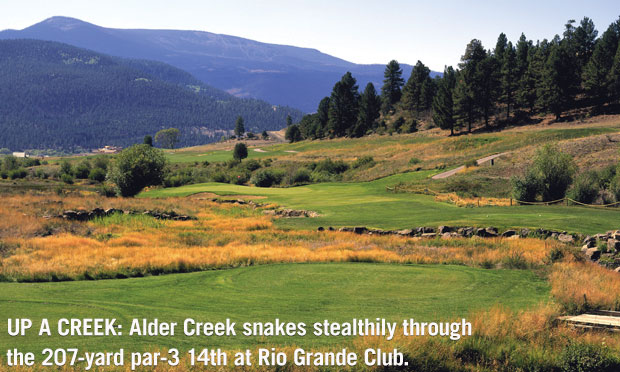 There is a Colorado that exists, at this point, mostly just in people’s minds. It’s the Colorado of quaint little towns, wide open spaces, expansive vistas and endless opportunity. The Colorado John Denver sang about.

It may never have existed along the busy Front Range and the I-70 corridor—and it certainly isn’t present there in any measurable amount now. It used to flourish in places like Aspen and Telluride, but that was long ago, before the billionaires invaded and rampant development robbed those places of much of their charm.

But that doesn’t mean small-town Colorado has disappeared for good. You can still find it here and there in isolated pockets, and one of the most authentic is in the upper Rio Grande Valley in the southwest part of the state. There, in the town of South Fork, you can still experience Colorado the way you always envisioned it, complete with a welcoming community, endless outdoor opportunities and a top-notch golf course at the heart of it all.

Home to the Rio Grande Golf Club and Resort, South Fork lies in the spectacular San Juan Mountains, at the confluence of the Rio Grande’s main stem and its southern fork, which spills down into town from the heights of Wolf Creek Pass.

It takes about four hours by car to get there from Denver (on highly scenic, untrafficked highways), and this off-the-beaten-path destination is more than worth the effort.

“We like to have people think of South Fork as a base camp for adventure,” says Town Administrator Dan Hicks. “It’s a reasonable drive for people in north Texas, Arizona and New Mexico to be able to get into the mountains within a day and get out of the heat, or for Front Range people to escape the crowds.” 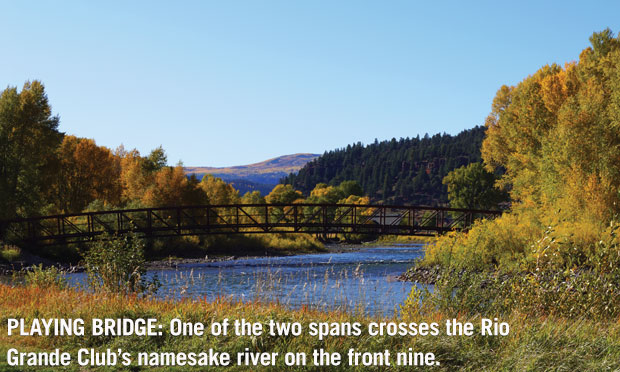 What those people discover is everything they could want in a mountain town. The stretches of the Rio Grande and its southern branch flowing through South Fork offer rafting and gold-medal trout fishing; there are hundreds of miles of hiking, mountain biking and ATV trails; technical rock-climbing routes scale the hills to the west; and, in the winter, the slopes of Wolf Creek Ski Area—which receives more snow on average than any other resort in the state—are less than a half-hour up the road.

A Tale of Two Nines

Semi-private but open for public play since debuting in 2002, the Rio Grande Club pivots around its 25,000-square-foot clubhouse. Highlighted by tall ceilings, cultured stone and log truss construction, the structure delivers big views of the San Juan Mountains and Rio Grande National Forest. It houses two restaurants—Big River Grille and Timbers Restaurant—as well as a conference area, banquet rooms and a fitness center and spa with men’s and women’s locker rooms.

Rio Grande’s 7,155-yard golf course, designed and built by Weiskopf protégés Ric Buckton and Jay Benson of Redstone Golf, features 18 holes framed by ponderosa pines, scrub oak and aspen. The two nines that comprise them are as dissimilar as they are dramatic.

The front nine commences with a downhill par 4 that leads to an open-meadow hole before winding along and over the Rio Grande on holes 3 through 8. The club’s 1,700-square-foot fishing lodge tucks between the par-5 third and the river, and the money shot comes at number 6, a par-3 that requires a long-iron to carry the rushing, trout-filled waters to a green snuggled in the pines.

The more alpine back nine, meanwhile, runs up the narrow valley of Alder Creek, which bestrides the green on the par-3 14th. Sloping terrain affords golfers challenging stances and abundant elevated tee shots, such as the one on the par-5 18th, which plunges about 200 feet to a fairway leading to a massive lake guarding the green, bringing water back into play for the final time.

After holing out, head to the club’s Big River Grille for an IPA from Del Norte’s Three Barrel Brewing Company and the scrumptious specials at Timbers Restaurant. In addition to golf and fly-fishing, the club has facilities for pickleball, tennis and swimming.

The club changed hands in 2016, with Kansas City-based Freeman Group Holdings taking over ownership. In the last three years, they’ve upgraded the clubhouse, rebuilt the course’s 50 bunkers, rehired the club’s former course superintendent and purchased more than $500,000 worth of John Deere maintenance equipment to keep the conditions as good as can be found at any mountain course.

“They’ve made a lot of upgrades over the last couple of years,” says Todd Small, the club’s general manager from 2000-2007 and again since 2012, “and it definitely makes a difference. The turf quality has improved dramatically.”

High-season green fees for the public range from $79 to $129, and stay-and-play packages are available through Rio Grande Vacation Rentals, which owns four units in the River Club condos that give guests full golf and membership privileges. The company also has another seven non-member River Club condos with 2-5 bedrooms each, as well as eight cabins and homes available for short or long-term rental in South Fork and just up the road in the historic mining town of Creede. 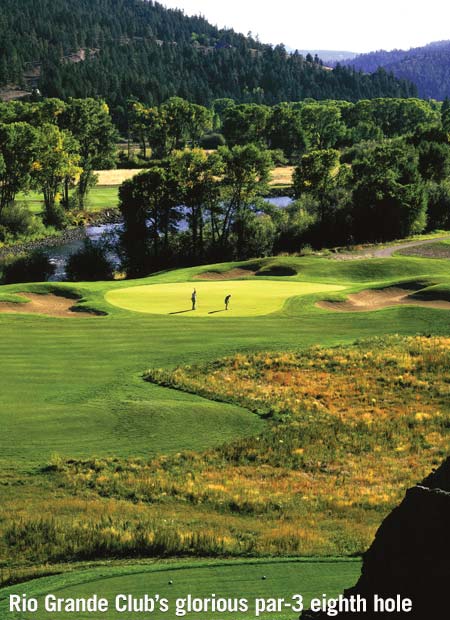 Membership at the club is capped at 700 individuals or families at three levels—social, fishing and golf. The winning combination of value and ideal mountain setting has thus far drawn members from 24 different states, with Texas and Colorado particularly well represented.

Outdoor activities may be the main draw, but the area also boasts a surprisingly impressive cultural outpost in Creede, home to the renowned Creede Repertory Theater. Headed for its 55th season of professional stage productions in 2020, the theater was rated one of “10 great places to see the lights way off Broadway” by USA Today in 2005 and was awarded the National Theatre Conference’s Award of Outstanding Achievement in 2007.

The hamlet of South Fork itself presents the rarest of opportunities for a savvy developer looking to get ahead of the curve. It was only incorporated as a town in 1992, and much of the downtown area presents, essentially, a blank slate on which to create a small business district from the ground up.

“The opportunity is there and available for anyone who’d like to come and start a business,” says Connie Goodnight, a realtor with Land Properties LLC in South Fork. “There are a lot of properties along the river that would be beautiful for a restaurant or a downtown area—shops on the bottom, maybe living quarters on top.”

A long-proposed, large-scale development near Wolf Creek has generated plenty of opposition but may one day add thousands of new residences to the area and give the town an economic and energetic jolt. These days, however, with less than 400 year-round residents, South Fork can be a bit of a sleepy place in the shoulder seasons.

Of course, that’s proven to be part of the allure for the growing number of Front Range expats who’ve given up on the hubbub of Denver and Colorado Springs and moved lock, stock and barrel to their homes at the Rio Grande Club.

They’ve figured out what a difference it can make to take the road less traveled, leave the crowds and static of the cities behind, and get back to where you can hear the real Colorado sing again.

Todd Hartley is an Aspen-area writer. For more information on the Rio Grande Club, visit riograndeclubandresort.com or call 719-873-1997.