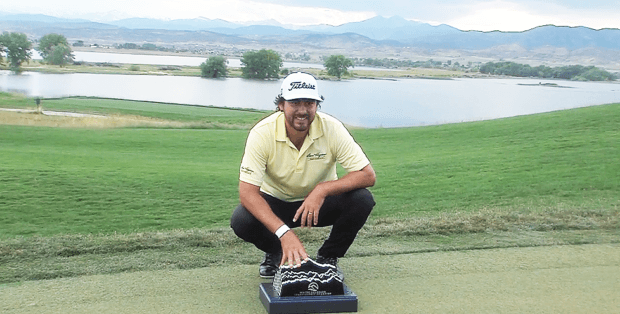 Berthoud, Colo. — Nelson Ledesma won the inaugural TPC Colorado Championship at Heron Lakes in dramatic fashion, sinking a 20-foot birdie putt at the 18th and final hole to edge playing partner Brett Coletta by one stroke. With the win, Ledesma earns his first PGA TOUR card and will be a rookie on TOUR during the 2019-20 season.

“We tried to look at the break from every angle and in the end, we decided to play it straight downhill,” said Ledesma, who walked it in with a huge fist pump. “When the ball was about six feet away from the hole, I knew it was going in. I knew the tournament was mine.”

The Argentinian held the lead for most of the day, but Coletta birdied the par-4 17th to draw even at 14-under before Ledesma’s closing birdie. The 18th hole played as the toughest hole on the course and the fifth toughest on Tour this season. Ledesma’s birdie was only the 19th birdie of the week on the par-4, 531-yard hole.

“I started the day a little nervous, but during the round I got control of my game,” said Ledesma. “On 17, when Brett [Coletta] made the birdie, I knew it was down to the two of us for the final hole. When I saw that last putt going in, that felt great.”

After entering the final round with a share of the lead, Ledesma had an up-and-down start. He tallied birdies at Nos. 2 and 3, but double-bogeyed the fourth hole to fall out of the lead for the first time since early in the first round. He rebounded with birdies at the fifth and seventh, sandwiching a bogey at the sixth, to make the turn at 1-under on the day. He parred every hole on the back nine prior to the 18th.

“It’s always been my dream to play on the PGA TOUR,” said Ledesma. “My dad encouraged me at a young age because he saw something in me. I am from the same town as Andres Romero (Tucuman), and Andres getting to the PGA TOUR gave me the belief that I could take it to the next level.”

Ledesma led after each of the first and second rounds and held a share of the lead (with Coletta) after the third round. He ranked T7 in driving accuracy for the week (82 percent) and hit 15/18 greens in regulation on Sunday (T2).

“This is the first time I’ve felt this strong with my game,” said Ledesma. “I changed my swing a little bit this year, and when I got here and saw the golf course being this long, it excited me. I trust my iron play, so I expected to play well. Last year’s win in New York almost felt like a lucky week. This year I’ve been playing great so it feels like it is legit.”

Coletta clawed back into contention after a tough start to his final round. The Australian double-bogeyed the first hole and bogeyed the fifth to go 3-over through his first five holes. From there he collected four birdies and nine pars to reach 14-under. The birdie at the 17th was the second consecutive day he birdied the hole, the fifth toughest hole on the course.

Four players finished at 13-under and hung around to see if that number would reach a playoff. Until Coletta birdied the 17th, and later, Ledesma birdied the 18th, 13-under looked to have a strong chance at a playoff with two difficult closing holes. Scott Harrington, Dawie van der Walt, Harry Higgs and Michael Gellerman each reached 13-under to finish T3.