The resort’s Sandia Golf Club boasts a challenging Scott Miller-designed layout, which stretches from 5,112 to 7,755 yards and this September will again sponsor and host the $85,000 New Mexico Open.

Take a spring road trip south of the Border

I’m an unabashed fan of New Mexico golf. With deliciously warm springtime weather that beckons like a flirtatious Kokopelli piper, the time is ripe for a road trip to Santa Fe, located a mere five-hour drive south of Denver via I-25, and to Albuquerque, another hour down the road.

First stop is Black Mesa Golf Club (above). Situated on the Santa Clara Pueblo just north of Santa Fe, this 7,359-yard desert routing offers a wild and woolly mix of native arroyos, red sandstone ridges and amphitheater-like canyons, all brilliantly orchestrated by Baxter Spann. The public course is highlighted by pure-golf views and is ranked the fifth best course in the state by Golf Digest. 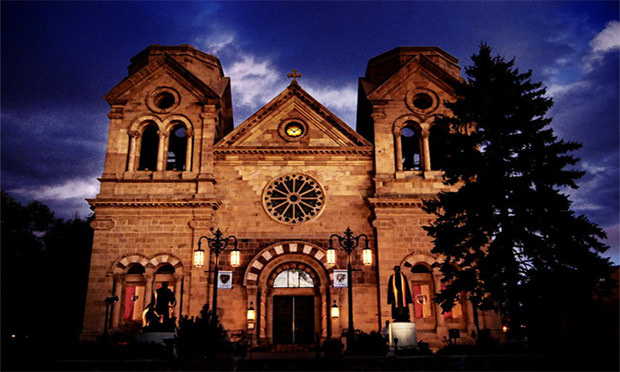 Take at least a day to explore and experience Santa Fe, celebrated among the top travel destinations in the United States for its classic adobe architecture, top-ranked restaurants and storied art galleries. The City Different also brims with historic attractions like the Santa Fe Opera House, Loretto Chapel, Palace of the Governors, Georgia O’Keeffe Museum and the Cathedral Basilica of Saint Francis of Assisi. 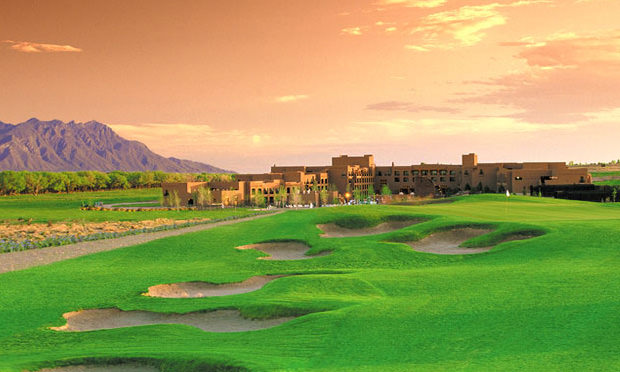 Next on the tee is Twin Warriors Golf Club (above), a 7,736-yard beast ranked No. 3 on Golfweek’s Best Courses You Can Play in New Mexico. Located on the road to Albuquerque, just outside of Bernalillo on the Santa Ana Pueblo, this impressive Gary Panks design is a key attraction of the luxurious Hyatt Regency Tamaya Resort and Spa. Player’s tip: Set aside time to also play 27-hole Santa Ana Golf Club, a superb Ken Killian design located just down the road from Twin Warriors.

You’ll find Albuquerque’s top stay-and-play offering on the north side of town at the Sandia Resort & Casino. Entering its second decade, the Sandia Pueblo-owned resort takes its name from the beautiful watermelon-colored Sandia Mountains that dominate the resort’s eastern views and continues to set the standard for luxury in Albuquerque.

The resort’s Sandia Golf Club boasts a challenging Scott Miller-designed layout, which stretches from 5,112 to 7,755 yards and this September will again sponsor and host the $85,000 New Mexico Open.

On May 28, Sandia will also kick off the 7th Annual ABQ Beer Week with the ABQ Blues & Brews festival, which features four blues bands and unlimited samples from more than 70 breweries.