Defining Speed in Golf and Do you Need to Increase it? 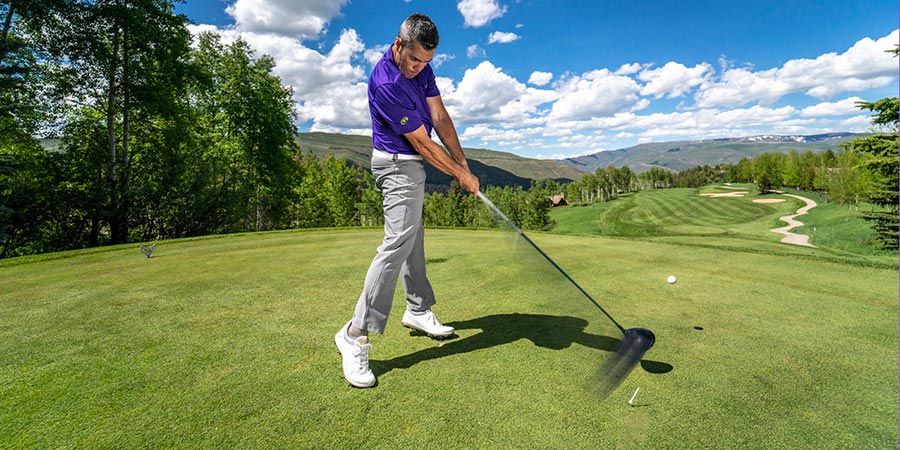 Speed has been on the mind of a lot of golfers lately but what exactly does that mean?

If you’ve been hiding under a rock for the past year, there’s a new ‘fad’ on the PGA Tour and local muni’s alike- the need for speed. I don’t know if I’m making a groundbreaking statement here, but I have a feeling ‘speed’ isn’t going to be a traditional fad and it’s going to be here to stay.

The transformation of Bryson DeChambeau and his complete dominance with distance really sparked the interest in increased speed but what does that actually mean and is that something all golfers, from pros to amateurs, should be working on? We’re defining speed and how you can add more of it to your golf game.

When it really boils down to defining speed in golf, there are two types of ‘speed,’ clubhead speed and ball speed. Clubhead speed is how fast the clubface moves during the swing and ball speed is how fast the ball travels off the clubface. And another term you might hear a lot in association with speed is smash factor (also known as efficiency) and that’s the difference between the ball speed and the clubhead speed. The reason I bring up smash factor is that a lot of people are chasing that perfect smash factor number (for driver, that number is 1.5). So why do any of these factors matter in your swing and why has it become such a hot topic lately?

Well in the simplest of terms, you need the most out of each variable- clubhead and ball speed, to get the most out of a shot with your driver. This includes distance and accuracy.

Increasing your need for speed

Now that we understand what speed actually means and how it impacts your game, how can you ensure you’re maximizing speed? Increasing your clubhead speed is fairly simple- swing faster but increasing ball speed can be a little more complex. The main variables to focus on to increase ball speed include launch conditions, equipment, physical strength, and swing technique.

While there’s a lot of factors to consider- launch conditions might be one of the most important of the four variables mentioned above. Launch conditions can have some of the largest domino effects on speed, whether it be good or bad. The launch conditions to really focus on are launch angle, spin, and descent angle. Getting down to the nitty-gritty, having a launch angle of around 12º and spin rates between 2000-2500 rpm is ideal and those numbers can ultimately produce a solid descent angle. If you manage to be successful in at least two of those variables, a long and straight drive is more than achievable.

Most of the variables mentioned above can be impacted by your equipment. If you’re using older clubs that lack technology, being proficient in any of those launch conditions will be difficult. Newer and more advanced clubs (especially drivers) are designed to help dial in those specific launch conditions for your swing, ultimately making increased speed a little more feasible.

Another factor to increase clubhead speed, which as we know by know impacts ball speed, is to swing the club faster and you can do that by becoming stronger. I could write a novel about fitness in golf but as World Long Driver competitor and Director of Teaching Quality, Brad Skupaka, simply puts it, getting stronger overall is plenty to become ‘fit for golf.’ If you want to dive into the golf fitness topic a little more, we talk with fitness expert Tim Ryan about ‘golf fitness.’

Adding speed to your game

If you’ve made it this far with me, you’re one dedicated golfer who’s just like the pros chasing speed. Adding speed to your game is now more achievable that you understand what speed actually means, the different ways speed can factor into your game. But now let’s discuss the technical aspect and tie the whole speed topic up in a nice bow.

In the video to the right, VP of Instruction, Nick Clearwater is joined by Skupaka to discuss three keys in your swing to help you increase speed. These keys include making a longer backswing, getting ‘down’ and getting back ‘up.’ If you can really hone in on these three techniques in your swing, then increased speed is a real possibility.

Like I said at the beginning of the article, I don’t think the topic of speed is going away any time soon- I actually think we’re just getting started. And as complex as speed might be, if you take one of any of the focus areas we talked about- launch conditions, equipment, physical strength, or technique- and really dive into it, you might be giving Mr. DeChambeau a run for his money.