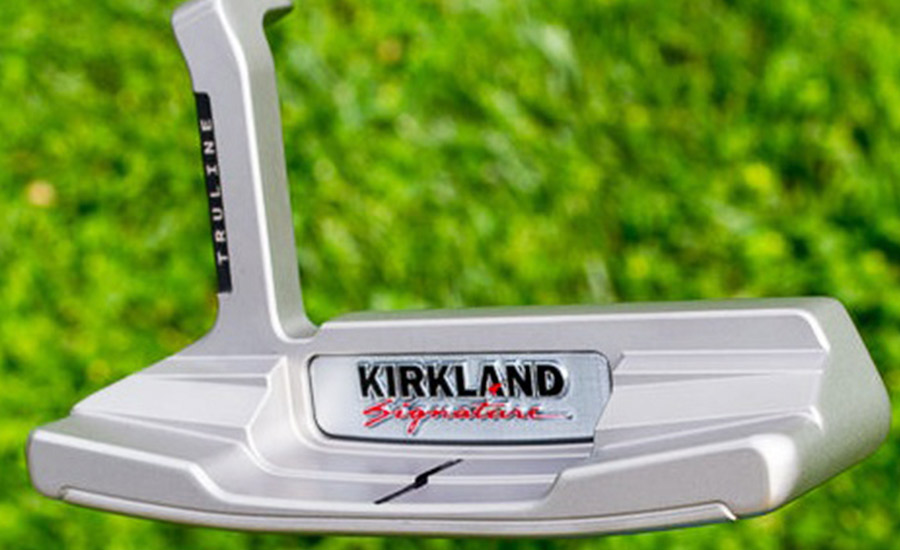 Four years after the Costco/Kirkland Signature ball broke the internet, the brand is back with another top-quality item priced incredibly low and selling out in short order.

If ever there was a product category whose price-point was ripe for disrupting it’s high-end putters. Golfers who reject Lee Trevino’s famous old maxim that “It’s the Indian, not the arrow”, or accept it at least but would still rather spend extra for a known brand, are paying $300, $400, even $500 for something cynics say doesn’t necessarily out-perform a soda can on the end of a stick. In the capitalist, free-market society we’re fortunate to call home, prices rise to whatever people are happy to pay. And a sufficient number of people are obviously happy paying a high price for a product they feel gives them an edge on the greens. Their putting stats might not show much improvement, if any but, at the end of the day, does that really matter?

Whether it does or doesn’t, the fact is a gap opens up behind the industry’s most expensive products ready to be filled by a manufacturer that promises similar quality but for a significantly reduced price. Few have the power to do this like Costco can. It fills its huge warehouse stores with relatively few products (a typical supermarket might be half or a third the size of the average Costco but offer twice or three times as many different products) that a lot of its members will want. It earns tiny margins on each of these products, but sells so many of them it ends up doing rather well – its bottom line exceeded $3.5bn last year.

Excuse the economics lesson, we just wanted to explain how Costco is able to produce a 100% milled putter—the KS1 which is created from a single piece of metal (in this case 303 Stainless Steel), much like a forged iron – that it can sell for just $150.

The Issaquah, WA-based company launched its first ‘Kirkland Signature’ (K-Sig) golf product four years ago when it offered a four-piece, urethane-covered golf ball that tested well against its elite Tour counterparts for an incredible $15 a dozen. The story of how they were able to do this is long, convoluted, probably not fully-known and, let’s face it, old news now. Leather gloves, and a urethane-covered three-piece ball followed and then, in September last year, the original four-piecer re-emerged having been produced in a different country by a different manufacturer. It’s second-coming ended in disaster when the company had to refund customers because the ball had durability and performance problems, but the original ball had done enough to create an audience eager to see what else Costco/Kirkland might be capable of.

The KS1 Putter is made in China and is a blade-style, plumber’s-neck design. That’s it, one model. It’s 34.5” long, has a SuperStroke CounterCore Mid Slim 2.0 grip, comes with two 10g weights in the heel and toe (a weight kit with two 15g heel weights, two 20g toe weights, and a 50g CounterCore grip weight is sold separately), and went on sale in 80 Costco warehouses and on-line two weeks ago. But, like the four-piece ball before it, it sold out quickly and is already turning up on eBay at inflated prices. When it returns to virtual shelves, it will no doubt disappear quickly again, so have your membership card ready. Whether he/she buys it online or in-store, the customer is unable to test the KS1 before they buy it which certainly won’t appeal to some, and there aren’t any master club-builders on-hand to custom-build you a putter. No worries though, the company’s return guarantee is always there for those that don’t like it.

If you’ve no problem wielding a putter with the same logo as the gallon bag of almonds in your pantry or 100-count bag of frozen burger patties in your freezer then a $150, 100%-milled model has got to be an attractive option.