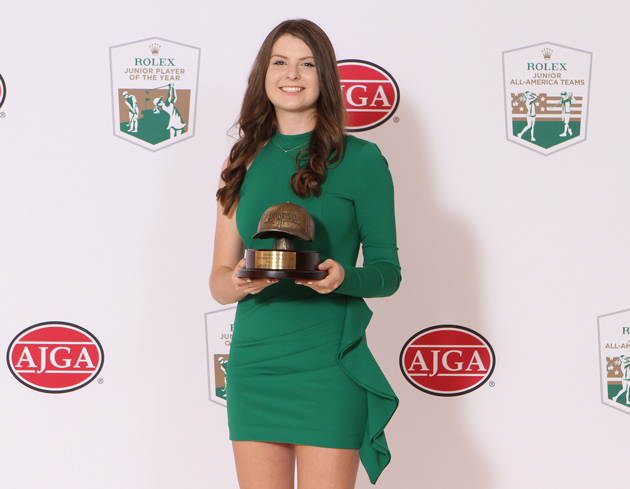 Charlotte Hillary of Cherry Hills Village has played the best golf of her young life in 2019.

Later that month, for the second time in three years, she qualified with teammate Hailey Schalk for the U.S. Women’s Amateur Four-Ball Championship, and in October, playing her home course, the Cherry Hills member also won her third JGAC (Junior Golf Alliance of Colorado) Tour Championship and earned JGAC Player of the Year honors.

Hillary’s 10-stroke margin of victory at Cherry Hills was not the most impressive number she would post, however.

That would be the $41,030 she raised through the AJGA Leadership Links Program—an accomplishment for which she received the AJGA’s prestigious Jerry Cole Sportsmanship Award at November 24’s Rolex Junior All-America Award Banquet in Palm Beach Gardens, Fla.

The Leadership Links program serves the AJGA’s mission of developing young men and women by teaching charitable-giving skills and service-oriented practices at an early age. Since its inception in 2009, the program has generated $3 million for more than 2,500 distinct programs and completed more than 50,000 service hours.

Hillary chose The First Tee of Green Valley Ranch, where she has been a volunteer for two years, and the AJGA ACE Grants program, which provides financial assistance to junior golfers who aspire to earn a golf scholarship through competitive junior golf.

She reached out to her peers, friends, family and members of the golf community, getting people to pledge a total of $290 for every birdie and eagle she made in competition. Those 75 birdies and eagles translated to $21,750. An additional $16,780 in one-time donations and gifts, plus a $2,500 matching grant from the USGA, brought the total to $41,030—more than anyone in the program.

“She Has a Calling”

For her efforts, Hillary received the Cole Award—presented annually to the junior golfer who best promotes integrity and sportsmanship, and serves the game in an outstanding way. This year, the AJGA adjusted its criteria to honor one boy and one girl; the boys’ award went to James Roller of Jenks, Okla., who raised $17,000 for College Golf Fellowship.

At the banquet, this video introduced Hillary and portrayed her as a devoted student, friend, mentor and competitor with so much respect for the rules and values of the game that she unhesitatingly will call a penalty on herself for an accidental rules infraction:

Not included on the video was the story of one of her charges, a girl, who was celebrating a hole-in-one Charlotte did not witness and suspected had not actually occurred.

“Instead of calling her out on it, Charlotte sat her down and said, ‘We’ll make a big deal out of this if you really think it’s worth making a big deal out of, but really the game of golf is about being humble as well, and not screaming your accomplishments from the rooftop,’” The First Tee of Green Valley Ranch CEO Kevin Laura told ajga.org.

“When I heard about that experience and how she handled that, I just knew that we had a special volunteer and someone who wasn’t just putting in the hours, but that she had a calling to do this kind of thing.”

What happened to Charlotte’s mentee between then and now? “She had her most outstanding year this year not only as a player, but she matured the most out of anyone in the program.”

Leadership Has Its Perks

Upon receiving the Jerry Cole Sportsmanship Award at the Rolex Junior All-America Award Banquet, Hillary challenged the audience to break the fundraising benchmark she had established, and which she will attempt to break next year before heading to Northwestern University:


The award also entered her into the Rolex Tournament of Champions at PGA National Resort & Spa, where she found herself tied for the lead after the first round with eventual champion Rose Zhang of Irvine, Calif. Zhang, the top-ranked would go on to fire a 13-under 275—11 shots clear of the field and 18 ahead of Hillary, who finished tied for 12th.

A somewhat more memorable benefit of the award came a week earlier when she got to play a round with AJGA alumnus and PGA TOUR star Rickie Fowler, who lives in nearby Jupiter, at Medalist Golf Club in Hobe Sound.

“There were eight of us, so four of us played the front nine with Rickie and the other four played the back with him,” Hillary says. She and her cartmate, Charissa Shang, played Fowler in a match and were 3 up after three holes.

“He was a little distracted,” she says. “He had some smaller kids to look out for.”

Those duties didn’t stop Fowler from dispensing some wisdom on the par-3 8th.

“I hit my tee shot to, like, four feet,” Hillary remembers. “When I went to putt it, he asked, ‘You’re going to putt that? You think that’s a risky putt?’ It was straight uphill. He just assumed everyone would just call it good. It showed me the mind of a professional. I putted it right in, but I remembered what he said and I didn’t miss a single putt within five feet during the Tournament of Champions.”

Hillary did miss seeing Tiger Woods, who was apparently four holes behind her group, but quit after nine. She didn’t miss the opportunity of having Fowler sign the 60 golf flags she’d brought to give her benefactors—as well as Hunter Swanson, a fellow coach and mentor at The First Tee of Green Valley Ranch, “who dresses like Rickie and is a huge fan.”

Fowler gladly obliged, setting the same kind of example that Charlotte Hillary does.