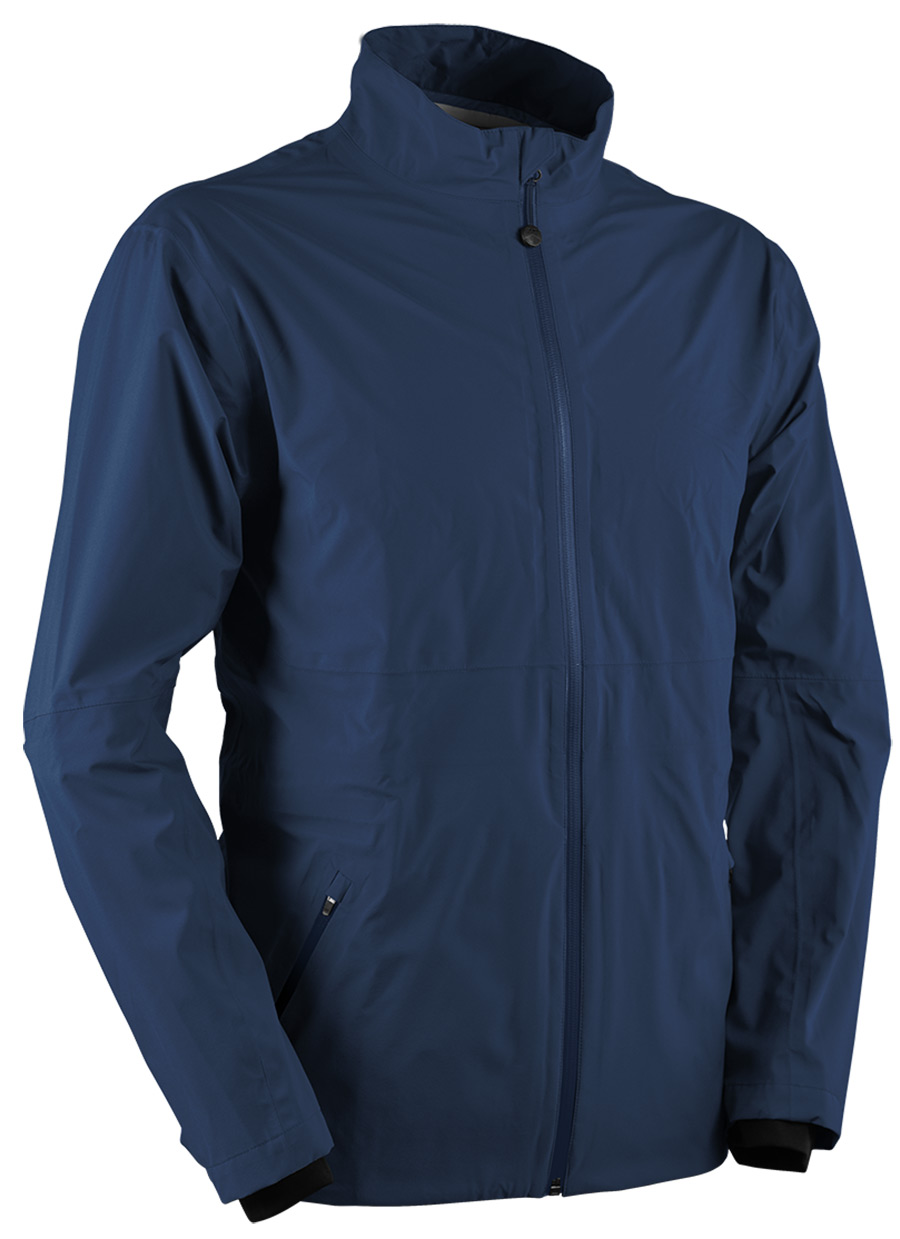 Heavy rain and your own perspiration are no match for Sun Mountain’s new raingear.

Anyone fortunate enough to have played some links golf across the Pond, knows conditions can turn nasty quick. You could be basking in sunshine as you walk up the 9th fairway remarking to your friends how fortunate you’ve been with the weather, but on the ground huddling together and holding on for dear life a few minutes later as a brief, but epic, storm crashes down around you leaving you a little dazed and confused. I remember it well – Narin and Portnoo, County Donegal, Ireland 1997.

We’ve all seen Open Championships where players have had to hide behind umbrellas made to look feeble by passing tempests. I recall attending numerous Opens in the 1980s and ‘90s and seeing gallery members pack together in the grandstands sharing home-packed sandwiches, flasks of hot tea, and whatever body heat they could muster.

This century, there were bad days at Muirfield in 2002 when a Grand Slam-seeking Tiger Woods shot a third-round 81 and home favorite Colin Montgomerie stumbled to an 84 in strong winds, heavy rain, and miserably cold temperatures; Royal Birkdale in 2008 when the 36-hole cut fell at 10-over and the winner, Padraig Harrington, finished 72 holes on three-over; and, of course the last day of Open Championship golf we enjoyed – the fourth round at Royal Portrush in 2019 – which saw some pretty heavy rain at times with Tony Finau the only player in the top-20 to shoot even-par on Sunday, and Champion Golfer of the Year Shane Lowry becoming the first winner since 1996 to shoot over par on the final day.

And the weather only seems to be getting worse. Having been to nearly 20 Opens over the last four decades, I would have said the 1980s suffered by far the worst weather, but the stats say otherwise. According to the Met Office (abbreviation of Meteorological Office), the UK’s national weather service, 11,030mm of rain fell on the country during the ‘80s.

Between 2000 and 2009, 12,569mm lashed down, and in the 2010s, Brits and folk from Northern Ireland endured an incredible 14,352mm (roughly 57” per year) of the wet stuff – an increase of 30% since the ‘80s! While we hope you never have to use them, you really shouldn’t plan a links itinerary to the UK without acquiring some good quality waterproofs. And if the last few months are any indication, the same is true for golfers in, or heading to, Denver. Much of the Western Slope is experiencing a severe drought, of course, but Denver has already received more rainfall in 2021 than it got in the whole of 2020. As news stations have all reported, the Mile-High City has seen its wettest start to the year since the mid-1940s.

Thankfully, as clubs, balls, shoes, etc. have improved rapidly in the 21st century, waterproofing has kept pace. Back during those ‘80s Opens, rainsuits not only failed to keep all the rain out, they also did a wretched job of emitting sweat and perspiration. When you got back to your car at the end of a tough day of watching golf and unzipped your jacket, an almost visible cloud of steam would be released.

Sun Mountain, celebrating its 40th year in business, says its new Cirque jacket has a breathability rating twice that of its previous garments (which also ranked high for breathability). In fact the Cirque, constructed with a three-layer Japanese fabric, has a waterproof/breathability rating of 20K/50K. Plenty of readers will know what that means, but for those that don’t, let me explain just how impressive those numbers are. Waterproofing is tested using the Schmerber test and measured in millimeters. The ‘20K’ figure refers to the height a column of water would need to be for the water to penetrate the fabric – in this case 20,000mm, or two meters. That is extremely good. The breathability figure though, is literally off the charts for golf waterproofs as anything over 20K has been considered ‘High Breathability’. The 50K number means 50,000 grams of water could escape through a meter-squared of the fabric being tested over 24 hours.

The Cirque jacket is also lightweight and quiet; and features waterproof YKK zippers, adjustable cuffs, and a cinch system at the waist.

The pant, meanwhile, has a stretch waist with zipper fly and belt loops. There are four pockets – two front with zippered pass-through, and two rear (one with zipper closure and one with Velcro closure). Both the jacket and pant come with a two-year waterproof guarantee.