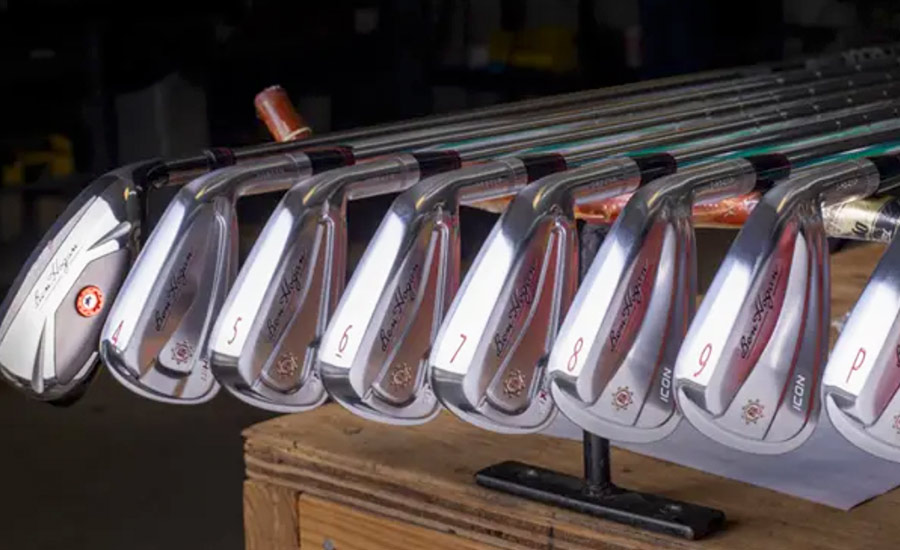 Ooh, some actual, physical, conventional golf hardware to tell you about. The virus and lockdown have obviously had a huge impact on the major manufacturers’ standard operations the last few weeks, the result being very few have committed to product launches. But one company that might actually be said to have flourished in recent weeks is the Ben Hogan Golf Equipment Company whose direct-to-consumer sales policy seems to have been made especially for such times.

“Since eCommerce hasn’t been impacted all that significantly by the COVID-19 pandemic, our business hasn’t been hurt as much as other premium golf equipment manufacturers,” says Scott White, Ben Hogan’s CEO. “BenHoganGolf.com and BenHoganGolf.eu have been up and running all Spring, and we’ve actually seen a significant increase in website traffic and sales.”

White acknowledges the reason for this is partly because traditional golf retailers were and, in many cases, still are closed, but he says there’s more to it than that. “We attribute a lot of our momentum to the fact more and more serious golfers are ‘rediscovering’ Ben Hogan Golf and are now understanding that we are simply conducting our business differently than we have before.”

You might think ‘serious’ golfers would have rediscovered Ben Hogan Golf and its factory-direct model long ago – the company took the decision to cut out the middleman three years ago, after all. As we’ll freely admit, however, golf and golfers can be interminably-slow adopters at times.

So what has the Ben Hogan Golf design team been up to? At the beginning of March, it released a drop dead gorgeous, stop-you-in-your-tracks, blade iron called the ‘Icon’ that Ben Hogan himself would surely have approved of. A blade-on-blade design rooted in Apex irons of the last century and forged from 1020 soft carbon-steel with minimal offset, a thin top line, and shorter blade length, the Icon certainly has old-school sensibilities but the nickel-chrome or Diamond Black Metal (DBM) finishes give it a fresh, modern look.

Though Scott White insists the Icon tested surprisingly well with 5-10 handicappers, there is no getting around the fact it is aimed at golfers who really know which end of the club to hold, if you know what we mean. The visible weight pad in the rear of each club has a unique shape, size, and position appropriate for each loft and creates what the company calls ‘Progressive Center of Mass’ which raises the Center of Gravity (CG) in the short irons to affect a boring trajectory, and lowers it in the longer irons to help get the ball in the air. That, however, really is about as far as tech related to forgiveness goes.

That said, the V-Sole is shaped to facilitate shots from all lies with a high-bounce leading edge and lower-bounce trailing edge. “It’s simply the most versatile sole in golf,” says White. “It prevents digging and therefore performs ably from anywhere on the course.”

Unlike Hogan sets of the not-too-distant past where the loft of each iron was engraved in the sole, Icon irons are identified by the number, and each has exactly four degrees more loft than the last. It’s a consistency and flow thing, says White, and is something else Hogan the perfectionist would have insisted on. The Icon was made available with three steel shafts – the KBS Tour V, KBS Tour 90, and True Temper Dynamic Gold, and one graphite option – the UST Recoil 760/780 with SmacWrap (which UST Mamiya says provides better feel through a higher damping rate). Other shafts are available at Club Champion with whom Ben Hogan Golf now has an agreement.

Thanks to the company’s business model, the seven-piece Icon is priced at a very attractive $770 (steel or graphite) with the nickel-chrome finish, and $800 for the proprietary DBM.

Just two months later – i.e. two weeks ago, Ben Hogan Golf added a couple of alternatives to the Icon’s standard long-irons, introducing the UiHi Utility Irons and VKTR+ Hybrids which, it said, are designed for “serious golfers who may not be comfortable hitting lower-lofted irons”. The UiHi utility club has a large, hollow head designed to appear more lofted than it actually is, and is a two-piece forged construction with a 1020 carbon steel frame and strong, thin MS300 steel face. The deep cavity and low CG help get the ball in the air, and the club is available in 18, 22 and 26-degree models.

The VKTR+, an optimized version of the original VKTR released at the start of 2016, likewise comes in 18, 22 and 26-degree versions, and has the unmistakable look of a high-toe Adams hybrid. This club features bulge and roll and variable face thickness, however, to increase forgiveness and bring mishit shots back online. It too features a multi-material construction with a body made of 17-4 Stainless Steel and a 455 Maraging Steel face.

The introduction of the long-iron alternatives allowed Ben Hogan Golf to satisfy customers who had been asking for a combo set incorporating last year’s extremely popular PTx Pro irons built using a “three-piece, multi-step, multi-material forging process”. The nickel-chrome-finished Player’s Combo Set begins with a 22-degree club, and is made up in one of three ways –

All clubs are available factory-direct on the company’s website where you will also find information on its customer-centric programs – free shipping on orders over $500, low-cost or no-cost financing, a risk-free demo period, and trade-in (the company calls it ‘trade-up’) deals that allow you to sell used equipment.

One wonders if Ben Hogan Golf’s recent spate of releases was influenced by the lockdown. Scott White says no. “Our new product launches have pretty much been as we had planned and scheduled,” he says. “Our Direct-To-Consumer business model means we can (and do) introduce products at almost any time during the year, not just when golf retailers demand new shelf sets or promotional items.”