Never One to Flag 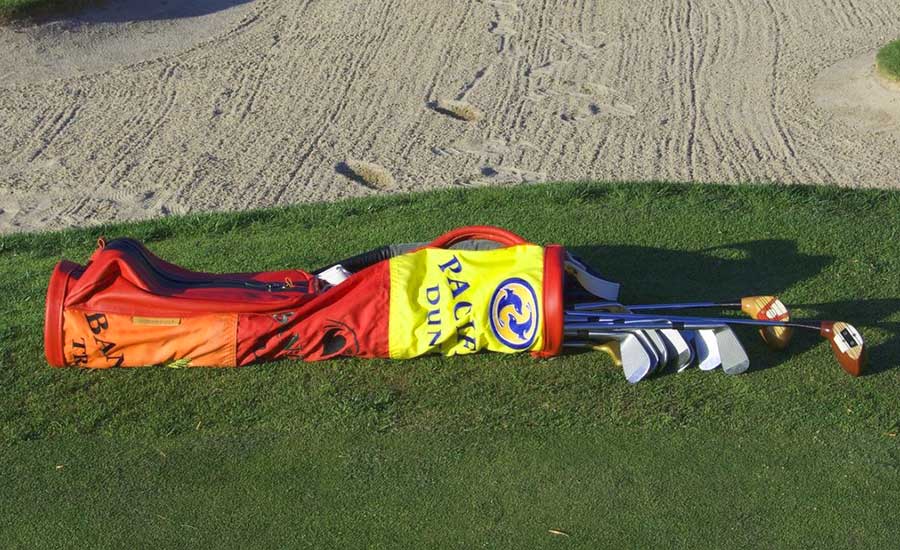 Josh Smith is a busy guy. On top of all his other responsibilities, he’s just co-founded a new golf bag company, FlagBag.

Josh Smith’s working day is spent tending turf as Head Superintendent at Orinda CC about 25 miles east of San Francisco. His two young daughters get his attention when he’s home and, if he has any time and energy remaining, he paints pictures of golf courses – not quick doodles with his daughters’ Crayolas, you understand, but major canvases almost definitely as good as anything you’ve ever seen (joshuasmithart.com).

Actually, add one more demand on his physical resources – co-ownership and management of FlagBag Golf Company which is beginning to take off due to a sudden rush of attention on social media and, let’s face it, a really, really cool product.
During his career in course maintenance – he worked at the California Golf Club of San Francisco (Cal Club) under Thomas Bastis for seven years, and has been at Orinda for nearly six –  Smith has spent a lot of time in greenkeeper’s sheds where he would notice old, disused, hole flags sitting idly by waiting for someone to eventually throw them out.

“It occurred to me early last year they must be useful for something,” he says. “Most are a little sun-bleached but otherwise they’re in good condition. I thought about stitching a few together to make a little golf bag for one of my daughters, and felt full-size bags made of old flags would be pretty popular.” Smith contacted an old friend in the business to see what he thought.
The old friend was Todd Rohrer who owned Mackenzie Golf Bags for 16 years, but had now moved on to another company – Macdonald Leather Goods – which he‘d founded early in 2019. “No one makes a better golf bag than Todd,” says Smith. “I got to know him about 15 years ago. I made a comment about my love for old-school, leather bags on GolfClubAtlas and Todd, who had just bought Mackenzie, reached out. We’ve been friends ever since.”

Smith sent a few flags up to Rohrer in Portland, OR along with some sketches of his proposed bag. A few weeks later, while visiting his dad, Smith met up with Rohrer who showed him the first prototype. “I loved it,” he says. “It was exactly as I pictured it. And Todd was just as enthusiastic.”

Within a few short weeks, the new company was up and running. Smith and Rohrer were the main brains, but they needed help with tech and sales. Josh’s brother Matt, who lives in Portland, joined along with Thom Faglie, Rohrer’s co-owner at Mackenzie.

One of the first bags the new company made was made of flags from Bandon Dunes Golf Resort – a yellow Pacific Dunes flag featured prominently near the top. “It’s one of my favorites,” says Smith who has history at Bandon Dunes.
Back in the days when the resort had just one course – David McLay Kidd’s eponymously-named debut design – Smith would drive up from the Bay Area to play this amazing links layout so unlike anything he had seen or played before. One evening, because dining/drinking options at the resort were limited, he was sat in a drinking hole in town, hoping to meet up with a Bandon Dunes staff member he’d asked on a date. But she never showed, and Smith wound up talking with three dudes sat at the bar, about golf.

“I asked if they worked at the resort,” Smith recalls. “They said sort of: they were building the second course which was going to be called Pacific Dunes.”

One of the guys Smith met that night was Brian Slawnik, an important member of Tom Doak’s Renaissance Golf team. Smith, who had graduated from Saint Mary’s College in Moraga, CA in 1998 and immediately joined Wadsworth Golf Construction, was looking for a new venture and, on Slawnik’s recommendation, wrote to Doak seeking some career advice.
“Tom wrote back inviting me to come out and join him and the team at San Francisco GC where they would be restoring Tillinghast’s greens,” Smith remembers. “He also wanted to buy one of my paintings.” It was through his work with Renaissance Golf that Smith found a position on the maintenance team at Cal Club. He also spent a little time at Meadow Club and Claremont, and studied the profession on a 20-week course at Rutgers University’s Professional Golf Turf Management School.

So he got to know a lot of superintendents and maintenance workers all of whom, when contacted over the last few months, have only been too happy to send old flags to Smith for him to make into golf bags. “I’ve asked for flags from about 35 clubs/courses now and have been turned down once,” says Smith. “And that was only because the club gave old flags away and didn’t have any spare.” 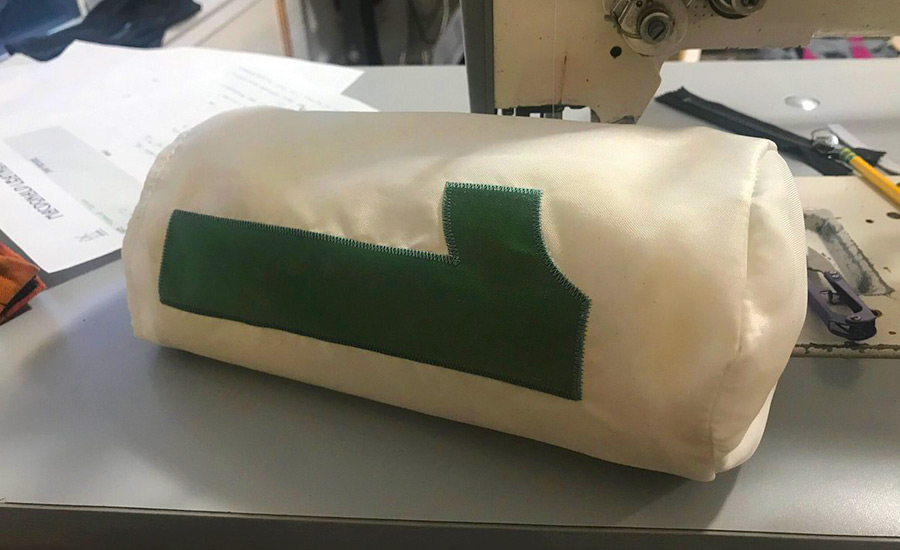 Most of the time, when Smith contacts old friends in the business he gets the same response. “A lot of people say ‘Holy s**t Josh, that’s a great idea’,” Smith laughs. “Bill Salinetti at National Golf Links of America (NGLA) in New York said he had ten years’ worth of flags.”

Bags made from private club flags are available only to members of the club through the pro shop, while those with flags from resort/public courses are available to the general public. FlagBag has a deal with every club/course that works out well for both parties.

The Bandon Dunes bag has proven particularly popular so far, and to show its respect and gratitude for the resort, Flagbag recently coordinated an online auction to benefit the caddies who were essentially out of a job because of the virus-forced lockdown. The auction took place on May 6th, and a number of familiar names from the golf world – Christina Kim, Lydia Ko, Cheyenne Woods, Tiffany Joh, photographer Evan Schiller, and writer Alan Shipnuck contributed. The auction raised a little over $28,000.

Josh Smith was involved, of course, but left most of the heavy lifting to his brother with whom he is working on another venture – an offshoot of FlagBag that will produce shaving kits, duffel bags, shoe bags and possibly stand bags. “We’re already collaborating with other companies to make headcovers and valuables pouches,” says Smith. As if he hasn’t got enough going on already.

A FlagBag varies in cost but the suggested MSRP is $875
flagbaggolfco.com