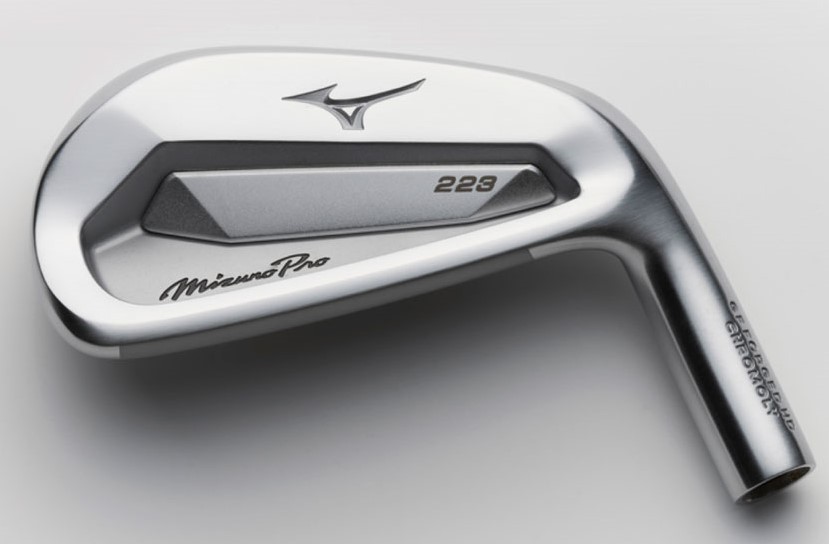 Mizuno’s new Pro Series irons are drop dead gorgeous (of course, they’re Mizunos), but pack their share of technology too.

There’s something different about Mizuno’s new family of irons, announced at the end of last week. But what though? They’re ridiculously attractive, of course, elegant in the familiar, time-honored Mizuno way. Stately, chrome finish and clearly the size and shape better players prefer. Thin soles, thinner top-lines and precious little offset. Yep, definitely Mizunos. So how are they different?

Look at the logo. No, not the RunBird which has been a symbol of Mizuno’s ‘boundless expanse and dynamism in sports’ and the ‘unlimited space and energy of the universe” since 1982, but the wording and lettering of the manufacturer. Up to now, Mizuno in the US has stamped its clubs with ‘Mizuno’, the ‘M’ slanting from low-left to high-right. The new irons are stamped with ‘Mizuno Pro’, the brand the Japanese clubmaker has used on irons in its home country for some time.
Why now? Good question not easily answered, though it’s probable Mizuno is seeking to curry favor with the influx of new golfers that have taken up the sport over the last couple of years (the R&A reported Tuesday morning that the number of global golfers now stood at 66 million – actually five million more than in 2016/17). These newer golfers likely won’t be aware of Mizuno’s standing in the game, and that it’s long been known for its graceful forgings. So why not present a global brand name and look now, with less emphasis on the company’s history and a little more on its technological offerings?

The company certainly isn’t concealing its past glories or reinventing itself in Chipotle, Play-Doh, Starbucks, Netflix or even Amazon-fashion, and Mizuno loyalists won’t feel ousted or abandoned. But golf is changing rapidly (well, as rapidly as golf can), and perhaps Mizuno feels this is a way to get on-board.
As with its previous three-iron launches (not launches of 3-irons but three launches of irons) the lines between the models are quite blurred and there is a significant amount of overlap. It means you’re likely to see Mizuno-users blending the three sets to produce what for them is the ideal combination of looks, launch, feel, trajectory, spin and ball-speed. That said, Mizuno believes the entirety of each set will prove popular and no mixing is necessary (though certainly is allowed).
If there is one model that will attract a very specific user it’s likely to be the Mizuno Pro 221. A classic blade, the 221 will appeal to only the finest ball-strikers – those able to create considerable clubhead speed and make consistently good contact. Their dispersion will be impressively tight and really the only demands they make are for good looks and superior feel.

There’s far less tech involved with a blade than a game-improvement iron and, sure enough, the advances in the 221 over the previous generation MP-20 are minor. As David Llewellyn, Mizuno’s Director of R&D, points out “We’re obviously working in small increments on a Mizuno muscleback.” The club is forged from one piece of 1025E mild carbon steel in Hiroshima, Japan – where Mizuno irons have been produced since 1968. The Copper underlay and Grain Flow Forging present in the MP-20 are here too (as they are in all three Pro Series irons), but there are a couple of changes that the target golfer will probably appreciate. Cleverly-beveled to give the appearance of a thinner top-line and more compact head, the 221 also features a thicker muscle pad (with weight moving from the heel) and less mass in the upper part of the blade. In testing, players said that gave a more-muted sound, the sort better players prefer. The distance between the Center of Gravity (CG) and shaft axis is the shortest the company has ever made which should make controlled shot-shaping a little easier. And in an effort to improve trajectory-control, the short irons (8, 9, PW) have been greatly reduced in size.

The ‘Elite Players’ Cavity’ Pro 223 is described as “Everything Tour players need to compete on extended, more demanding layouts – but never thought to ask for.” That would suggest it has all, or most, of the feel and control capabilities of the 221 with a lot of distance and a little forgiveness.
Llewellyn likens it to a smaller JPX921 Forged and similar to one of Mizuno’s small player’s-cavity irons – “comparable to the MP-62, MP-64 or MP-18SSC,” he adds. The company’s web site says it “…conceals a ball speed-enhancing construction within the frame of a compact players cavity”. The speed in the 4-7-irons comes from the use of forged Chromoly, a very strong steel alloy made principally of chromium and molybdenum. Because it’s so strong, Chromoly faces can be made very thin which increases the club’s Co-efficient of Restitution (COR). Individually-shaped Microslots in the sole of the 4-7-irons are designed to further increase ball-speeds. The 8-PW, meanwhile, are, like the Pro 221,  constructed from 1025E Mild Carbon Steel.

The handsome, blade-like Pro 225 is the Player’s Distance iron and “The second generation of Mizuno’s Hot Metal Blade (HMB) – plus the most playable of the Mizuno Pro Series”. The face and neck of the 2-8-irons are Grain Flow Forged with 4135 Chromoly and feature a forged, hollow body. The 2-7-irons have  28.5g Tungsten inside to launch the ball a little higher and increase ball-speed. Strong lofts (34˚ 7-iron, 44˚ PW) keep trajectories manageable. The 8-iron is hollow but does not have any tungsten in order to make a seamless transition from hollow, longer-irons to the half-hollow-body, no-tungsten short irons which are constructed from 1025E Mild Carbon Steel and have a 431 steel backweight to produce a slightly more penetrating ball flight.