A Scottish Classic Coming to America 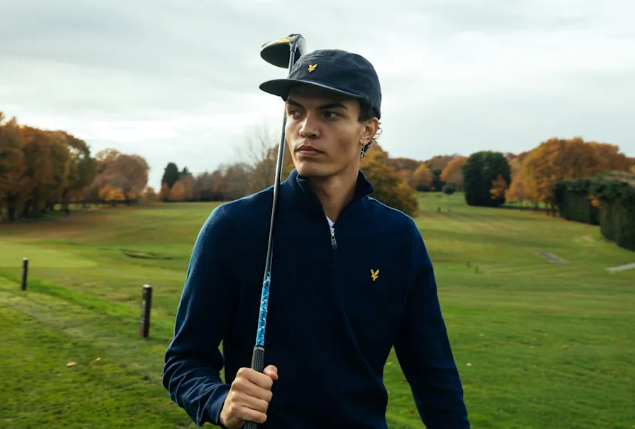 Lyle and Scott began making quality knitted underwear in southern Scotland 147 years ago. Americans will soon be able to see how the product line has evolved since then.

There will be some readers, not many, who remember Jack Nicklaus winning his third and final Open Championship, at the Old Course in St. Andrews, in 1978. A final round 69 saw him finish two clear of four players including his final-round playing partner Simon Owen of New Zealand.

Those that can picture the Golden Bear (the nickname was first used by an Australian writer at the 1967 US Open) walking up the 72nd hole will remember what he was wearing that day – navy slacks, a white collared shirt and a Navy sweater with a three-tone Argyle pattern across the chest.

The sweater was notable as it was the first time a Lyle and Scott garment had been worn by the Open champion. The famous Scottish brand had been in business since 1874 when company founders, William Lyle and Walter Scott, were granted an £800 loan to purchase a small factory in the town of Hawick, 15 miles north of the English border.

The company grew rapidly throughout the first half on the 20th Century, tripling in size by 1910. By 1954 it had become so well established, it created a cashmere collection with France’s greatest fashion designer, Christian Dior. It didn’t become associated with golf until the late 1960’s, however, after partners Lyle and Scott attended their first Open Championship – at Carnoustie in 1968.

Ten years later, Nicklaus would win the 107th Open wearing the company’s clothes, and he’d be joined by several other notable players over the years – Gary Player, Arnold Palmer, Tony Jacklin, Greg Norman, Ian Baker-Finch, and Lee Westwood among them, who would wear the famous Golden Eagle logo that had been inspired by the Gleneagles Hotel eagle.
It wasn’t just golfers that stepped out in Lyle and Scott though. Celebrities like Sean Connery, Bob Hope and English comedians Ronnie Corbett and Jimmy Tarbuck proudly wore the Golden Eagle, and Lyle and Scott somehow became the preferred label of certain British music subcultures and was common on soccer stadium terraces where fans stood and chanted in support of their favorite team. Soccer stars David Beckham and Cristiano Ronaldo are also keen wearers of Lyle and Scott.
In 1975, the company was given a royal seal of approval when the Duke of Edinburgh awarded it his Royal Warrant in recognition of its quality and workmanship. And that quality and workmanship is finally coming to America with the brand launching a full range of golf apparel in 2022.

The official launch will come during the PGA Merchandise Show in Orlando when the US-based team will reveal what’s described as a ‘sophisticated, modern golf aesthetic’ in an assortment of base layers, jackets, sweaters, sweatshirts, knitwear and polo shirts including the simple and elegant Andrew Polo and distinctive Eagle Print Polo Shirt.
“Our entry into the US is a committed long-term investment,” says Chris Somerton, Head of Golf for Lyle & Scott. “We continue to listen to our American team to create distinctive collections for a wide and diverse range of golfers, from those seeking a fashion-forward performance piece or something more timeless, As an authentic golf brand, born in Scotland, we’re a versatile alternative to ‘me-too’ designs with a passion for making our sport more exciting, inclusive and accessible to everyone.”
Though Lyle and Scott does offer a range of Women’s clothing (bralettes and bodysuits, coats and jackets, hoodies and sweatshirts, joggers and leggings, knitwear, t-shirts and polo shirts), the golf-specific line is men-only.

lyleandscott.com (web site will be developed for US market)