A Dos of Reality

From Denver, it takes about as long to drive to Gunnison’s Dos Rios Golf Club as it does to play the course—and the old-school layout is worth every minute.

A rose is a rose is a rose, and a rose is certainly not a river, let alone two. So why, then, does the logo for Dos Rios (Spanish for “Two Rivers”) Golf Club in Gunnison feature a bright red flower?

After all, given the meandering shape of the last letter in both “Dos” and “Rios,” someone surely could have floated a more riparian option.

But apparently one of the folks who financed the building of the course in the early 1960s loved roses and submitted the stenciled logo. It stuck. 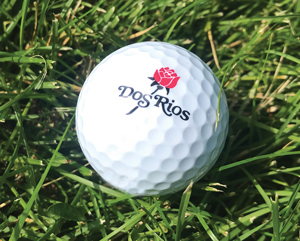 A member-owned course that’s open to the public, Dos Rios Golf Club takes its name from the Gunnison River, which splits for 1,500 yards as it runs west through the valley and golf course, forming two forks that eventually rejoin on the way to Blue Mesa Reservoir and the dramatic Black Canyon of the Gunnison.

Of the two, Phelps’ nine is the more challenging. The dense stands of mature trees lining virtually every fairway dictate strategy and are equally as penal as the ubiquitous water, which comes into play on every hole of the back nine and all but the first two holes of the front.

Despite being perched at 7,000 feet, Dos Rios isn’t a mountain course with elevated tees and dramatic vistas. It sits in a valley, its relative flatness making it eminently walkable; it also means much of the trouble—especially the creeks and streams that snake through the fairways—is invisible from the tee, making the club’s complimentary yardage guide an indispensible piece of equipment.

The water makes its debut as a stream crossing the fairway at the elbow of the dogleg-left 343-yard third. It sits in a pond left of the fourth tee; guards the fifth and eighth greens as a creek; creates a lake to carry on the picturesque 202-yard par-3 seventh; and lurks along the right side of the par-5 ninth.

A quarter-mile walk (or ride) from the ninth green delivers you to the harder nine, which begins with the 389-yard 10th. The stream bisecting the fairway 160 yards from the pin can easily snare the average player’s drive (especially an average player who neglects to consult his yardage guide), so tee off with an iron or hybrid and use it again for your approach.

A pond and a stream carve the 13th into two distinct fairways and a green. You basically leapfrog towards a putting surface that’s dramatically framed left and right by cottonwoods and along the bottom by the rock wall fringing the stream—all of it pressed against the mammoth black backdrop of Hartman Rocks.

On 16, four separate ponds divide the 529-yard hole into risk-reward checkerboard, inviting the opportunity to get on in two with a 250-yard water carry or lay up to 100 yards with a long iron to the left fairway.

Ten holes at Dos Rios require clearing water to reach the green in regulation, so why should the tree-lined 397-yard 18th be any different? One of the wider parts of the Gunnison’s south fork protects the broadest, deepest green on the course, so club up on your approach.

The downhome vibe of Dos Rios’ Los Dos Grill makes it the perfect spot to recount the round—and count the round objects you sent swimming—over frosty Alaskan Ambers and a hearty fish sandwich with fries.

Ranging from 4,593 to 6,512 yards, the layout doesn’t reward length as much as accuracy, strategy and shotmaking. It protects par with trees, water and undulant greens into which players tend to read too much break.

Dos Rios is well worth the three and one-half-hour drive from Denver, especially if you sleep at the nearby 52-room Water Wheel Inn, which offers stay-and-play options and puts you close to the trails at Hartman Rocks, pasta at Garlic Mike’s, star-gazing at Gunnison Valley Observatory and the wild times and wildflowers in nearby Crested Butte.

Speaking of flowers, the only roses on the course at Dos Rios appear on the 18 flags marking each hole, but that doesn’t preclude the occasional thorny situation. Otherwise, it wouldn’t be golf, now would it?