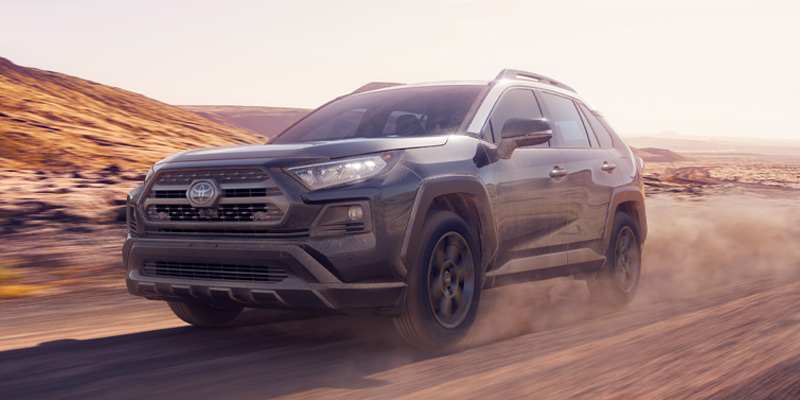 Toyota’s best-selling vehicle, seemingly forever, has been the Camry. Reflecting the massive industrywide shift to crossovers, the RAV4 now wears that title, so it’s a good thing that it has been completely redesigned for 2019.

Based on the same, excellent TNGA architecture that serves under most new vehicles Toyotas, this compact crossover is faster, more fun to drive, quieter, better riding and finished to a much higher standard than its predecessor.

This fifth generation RAV4 has quite audacious styling, though it works better on some models than others. Basic trims look quite cheap, with plastic hubcaps, small wheels that are lost in the angular fenders and lots of black textured plastic. Top shelf offerings are much more successful, especially the Adventure and TRD Off-Road, whose overbite grills, flares, bigger wheels and more aggressive tires bring out the upswept window line and evoke the tough-truck image of the Tacoma. 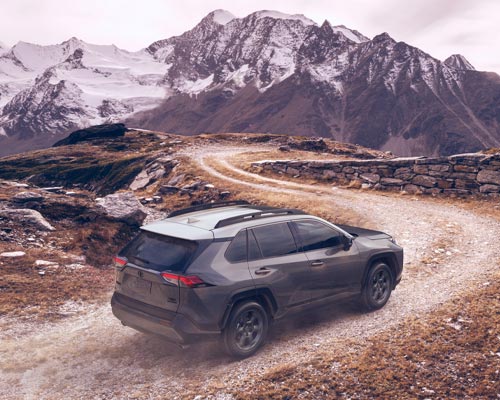 The Adventure’s interior really leverages the breadth of colors and materials available with modern manufacturing. Soft touch, dove gray moldings and seats contrast with orange stitching, striping and grippy storage cubbies, creating an ambiance that excites and pleases; that Jeep pioneered such crossover cockpits takes nothing away from the success Toyota has achieved with their interpretation. Front seats are very supportive and comfortable overall, though the non-adjustable headrests might poke some in the back of the cranium. The rear seat is supportive and cargo room on the large side for the class—though not as commodious as that in arch-rival Honda CR-V. The 8in touchscreen interface is placed prominently atop the dash; it is easily reached and keeps the driver’s eyes from having to look far from the road to change settings, but the graphics and layout, while clear, look a bit boring and somewhat low rent.

All RAV4s are powered by a 2.5-liter four cylinder that is significantly more powerful than before. The gas-only version has 27more horses than before, with outputs of 203hp and 184lb-ft. It is smooth and revs with a growly enthusiasm. Motive force flows through a responsive 8-speed automatic and 0-60mph is competitive at 8 seconds. There are three AWD systems available on the Toyota; the first two are a basic system on the LE and XLE and one that offers torque vectoring (which sends power to the wheels that can best use it), standard on the Adventure, TRD Off-Road and optional on the Limited. Hybrids, which have an Atkinson-cycle version of the 2.5L, power the rear wheels exclusively with an electric motor. Toyota considers the hybrid the performance version of the RAV4, with a combined 219hp, more low-end torque and quieter running. It can be had with a stiffer suspension the XSE. 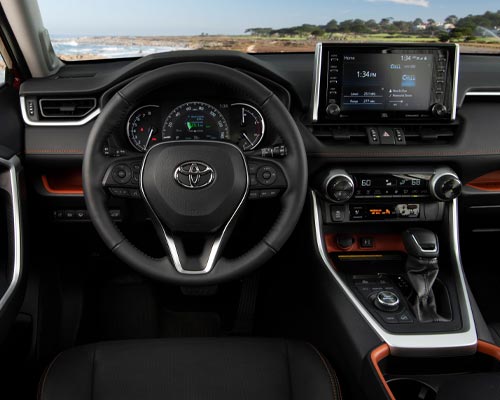 The new platform imbues the RAV4 with more precise steering; it’s accurate and gives a good sense of what the front tires are up to. Body control is much, much better too, with a generally smooth ride and overall the Toyota feels sporty and responsive. It is quiet too, though wind noise from the large mirrors is noticeable. Most essential safety gear like autonomous emergency braking, adaptive cruise control and lane assist are standard, but there’s an upcharge for blind spot and rear crosspath monitors.

The RAV4 faces very stiff competition from the Honda, Mazda CX-5 and all-new Subaru Forester. The CR-V has more room and a turbo; the Mazda is even higher quality inside, has better ride, handling and noise suppression, and the Subaru is roomier and has a better interface. But the Toyota offers more variants than any of these, is competitive in performance (with the exception of the CX-5 turbo) and in hybrid form has the best fuel economy. Now that the RAV4 has been so thoroughly upgraded, it would be no surprise if it regains its titles as the best-selling vehicle in Toyota’s lineup and as the number one selling compact crossover in America.