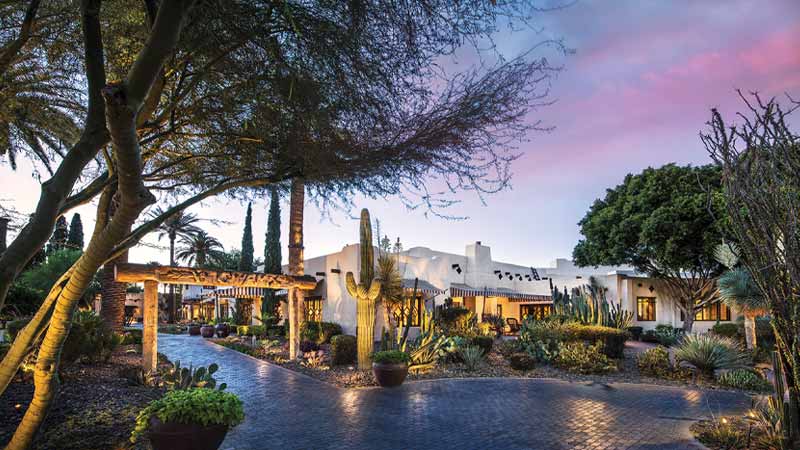 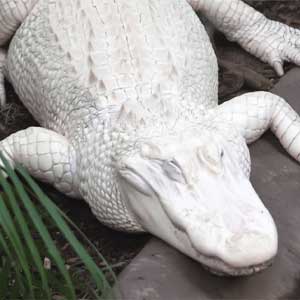 Opened 35 years ago and featuring more than 600 separate species, the largest collection of exotic animals in Arizona waits at Wildlife World—a zoo, aquarium, safari park and “dragonworld” set on 215 acres just six miles from the Wigwam. Stay for lunch at Dillon’s KC BBQ, where a 60,000-gallon shark tank dominates the view. wildlifeworld.com

The go-to course for those who want a test, Ak-Chin Southern Dunes Golf Club in Maricopa is more than worth the 40-minute drive south from Scottsdale. The 7,546-yard design by Brian Curley, Lee Schmidt and Fred Couples permanently resides on Golf’s Top 100 U.S. Courses You Can Play. No homes intrude on this purist’s paean to fescue-framed fairways, sprawling bunkers and inspired greens. It annually hosts U.S. Open Regional Qualifying and a World Long Drive event. The Ak-Chin Indian Community owns the Troon-managed course and the 300-room Harrah’s Ak-Chin Casino Resort six miles south. akchinsoutherndunes.com 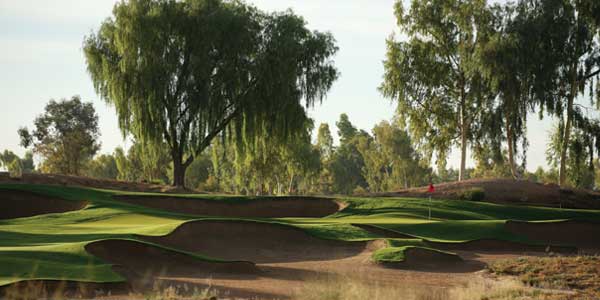 A Pint in the Wilderness

Put It In Park 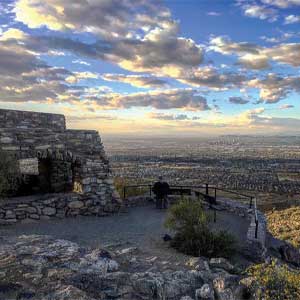 An outdoor lover’s dream awaits on the south end of Metro Phoenix, where 51 miles of trails crisscross the 16,000-acre South Mountain Park and Preserve. Guided horseback tours from Ponderosa Stables reveal ancient petroglyphs, while hikers (and drivers) can summit the highest point in the park, Dobbin’s Lookout, which affords a north-facing panorama of numerous landmarks, including Camelback and Superstition mountains. visitphoenix.com

Get to Tonto, Pronto

Situated in a gated active-adult community next to Tonto National Forest, Tonto Verde Golf Club boasts a pair of Gary Panks-David Graham courses—the 7,004-yard Ranch and 6,733-yard Peaks—with some of the finest greens in the area. Both layouts welcome the public, as does Tonto Verde’s award-winning Mesquite Grill. Members enjoy myriad amenities, as you can also experience with Tonto Verde’s $995 four-day/three night Discovery Package. tontoverde.com

The flagship of the Troon Golf empire with two 18-hole courses, Troon North Golf Club stretches through the natural ravines and foothills beneath Pinnacle Peak and weaves around the giant boulders and saguaros of the Sonoran Desert. Designed in 1990 by Tom Weiskopf and Jay Morrish—with some deft recent remodeling by Weiskopf—the Pinnacle and Monument courses remain the hallmarks of daily-fee desert golf, regularly earning high rankings from every national golf publication. The high standards continue minutes away at the Four Seasons Resort Scottsdale at Troon North, which shuttles guests to and from the course. troonnorthgolf.com 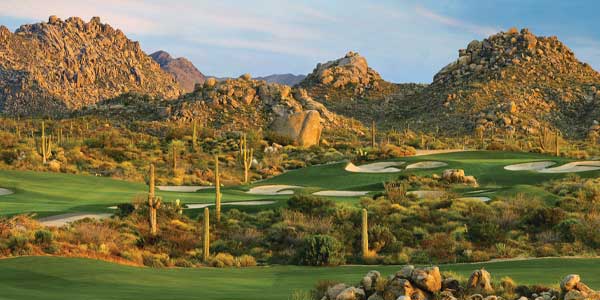 And While You’re There…

If hiking’s your thing, head to one of the five trailheads at the 30,200-acre McDowell Sonoran Preserve, where paths of varying difficulty lead to majestic views. experiencescottsdale.com 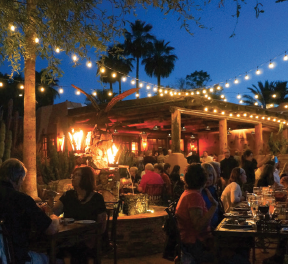 A course that plays 6,100 yards from the tips isn’t going to scare anyone, but the par-70 layout at Rancho Mañana Golf Club & Resort plays longer, thanks to the presence of six tough par 3s, numerous elevated greens and a front nine that steadily climbs to higher elevations before descending on the back nine. The incredibly scenic Cave Creek course offers views of surrounding mountains. Hundreds of saguaros spike the hills, and javelinas and jackrabbits regularly dart across the fairways. ranchomanana.com 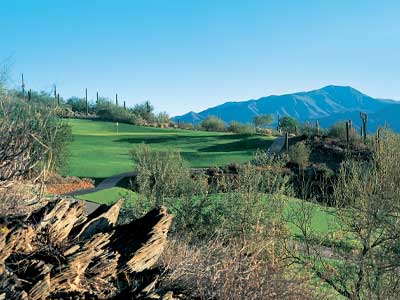 In the language of the Fort McDowell Yavapai Nation, “We-Ko-Pa” translates to the nearby “Four Peaks Mountain,” and in the language of golf, We-Ko-Pa Golf Club means “two must-play courses.” Both the Scott Miller-designed Cholla layout and Coore-Crenshaw’s Saguaro descend into valleys, scale ridges and boast mountain views, and both have received high ratings and benefit from the absence of houses and roads. The difference? The older (by five years) and more scenic Cholla is target-style desert golf, whereas the Saguaro delivers a more natural, easily walkable round. Which is better? Play both and decide. wekopa.com 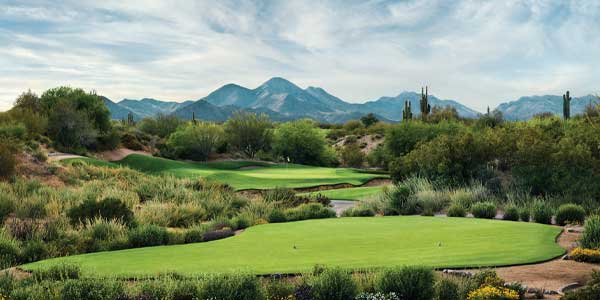 A mile from the stunning We-Ko-Pa courses and only 20 minutes from Phoenix Sky Harbor International Airport stands the We-Ko-Pa Resort & Conference Center, 246 rooms of AAA-rated four-star luxury with dining at the Ahnala Mesquite Room and four other restaurants. Look for a 166,000-squarefoot casino to open next spring. wekoparesort.com

Flying Down to Rio

Rio Verde Country Club emphasizes the active in active-adult community. Seizing upon its location in the McDowell foohills next to Tonto National Forest, the Troon Privé-managed facility features clubs for hikers, bikers and horse-lovers. Members can play 36 holes of Tom Lehman-designed golf, tennis on six courts and pickleball on four. There’s also a bocce pitch, heated resort-style pool, fitness center and art studio. Rio Verde just completed a $3.75 million clubhouse renovation, renaming its restaurant the Box Bar Grille after the ranch on which the club sits today. Prospective members can stay at the club by appointment. rioverdearizona.com 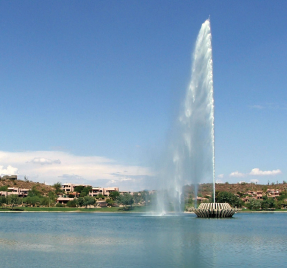 See the 330-foot high plume of water that gives the town of Fountain Hills its name. Rising from a concrete water lily sculpture in the man-made lake at Fountain Park, the fountain spent 10 years as the tallest in the world after it opened in 1970. It spews daily on the hour for 15 minutes, and on certain holidays, it shoots 560 feet in the air, higher than the Washington Monument. Avoid going on windy days when it turns off. Even if it’s not Old Faithful, it’s still pretty cool. fh.az.gov

Nestled in the ravines of the McDowell Mountains and colorized by dramatic sunrises and sunsets, Eagle Mountain Golf Club beckons with 6,800 yards of contoured fairways and immaculately maintained emerald greens. The par-71 Scott Miller-designed layout, which opened in 1996, winds spectacularly through natural box canyons, rolling hills and lush desert valleys southwest of downtown Fountain Hills. A departure from desert-style “target golf,” the course culminates with a brilliant par 4 that doglegs around a pond fronted by 10 fairway bunkers. Bonus: You can surf the turf atop a Golfboard. eaglemtn.com

Time for a Quickie?

The resurgent Mountain Shadows Resort in Paradise Valley has earned universal praise for The Short Course, an upscale 18-hole par-3 layout by Forrest Richardson, who worked with Jack Snyder on the hotel’s original course in the 1960s. Holes span 75 to 193 yards, with challenging greens, bunkers and water. The retro clubhouse is a blast. mountainshadows.com/golf

Since 1994, MacDonald’s Ranch in North Scottsdale has specialized in individual and group and stage coach rides, cookouts and more. Guided rides take place on easy-to-traverse desert terrain with the occasional hill, numerous desert plants and gorgeous scenery. On days before the night of the full moon, the stables offer unique moonlight horseback rides as the sun sets and the moon’s luminescence romantically glimmers on the skin and needles of the cacti. macdonaldsranch.com 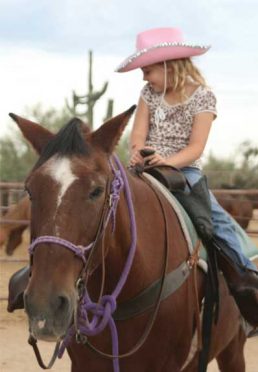 For 26 years, Chef Chrysa Robertson has kept Rancho Pinot hot by resisting definition. Neither “Southwestern,” nor “Italian” nor “Arizonan,” her cuisine blends all those elements and dozens more into unforgettable deliciousness. ranchopinot.com

A favorite among epicureans since opening in 2009, FnB hews to seasonality and local growers, meaning nothing stays on chef Charleen Badman’s menu for long. fnbrestaurant.com

The inspired prix-fixe fare at Sel, chef Branden Levine’s Arts District eatery, is as lovely as the works in the neighboring galleries. selrestaurant.com

This section appeared in the 2019  Fall Issue of Colorado AvidGolfer.