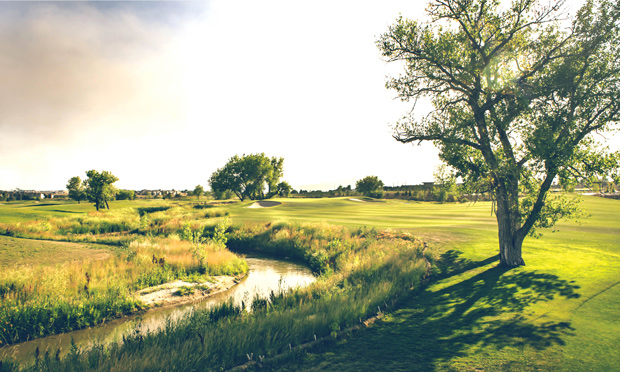 $10 Million in renovations and restorations at Thorncreek Golf Course make it a must-play for any Colorado golfer this summer and fall.

Last month on July 22, 652 days after closing for an extensive renovation project, Thorncreek Golf Course officially reopened amid great excitement. Owned and operated by the City of Thornton, the 26-year old facility underwent close to $10 million in upgrades to enhance playability, improve course conditions and modernize the clubhouse.

“We were looking for a better all-around experience,” says Thorncreek’s PGA Head Professional Chris Swinhart, who oversaw the execution of the plan. “We wanted to improve pace of play and also to make it more welcoming and family-friendly.”

The look and feel of most holes have completely changed. Course Superintendent Doug Fisher planted more than 24,000 pounds of new seed on all tees, fairways, greens and some rough areas. Of the course’s original 40 bunkers, 14 vanished, resulting in wider fairways and chipping areas around larger greens. The bunkers that do remain employed the Better Billy Bunker construction method, which promotes better drainage.

One of the bunker casualties came on the right side of the first fairway, making the landing area wider and more forgiving. Similar addition by subtraction took place on holes six, nine, 12, 14 and 18.

Gone, too, are many of the split-rail fences (repurposed as hazard and OB stakes), overgrown shade trees (thus reducing frost delays), the unsightly cart paths splitting numerous fairways (rerouted to the outside edges) and severe greenside mounding (shaved down for easier access). Most delightfully, the drainage ditch that crossed the landing zone on the par-5 16th has become a culvert beneath the fairway. Players can now hit driver off the tee, but from the 642-yard tips, they’ll still have to avoid the bunkers 305 yards away. To entice scoring opportunities, Spann enlarged the green and moved it 20 yards left of the hazard.

The age of the irrigation infrastructure necessitated a complete replacement of the system. The new system features 2,056 new heads and far greater coverage, control and efficiency. Despite using 2,250 gallons of water per minute compared to 1,600 with the old system, the new system uses 15 to 20 percent less water than it did before. The course also installed 9.3 miles of new drainage and built plumbed comfort stations by the fifth tee and 14th green.

For “curb appeal” from I-25, the team placed particular emphasis on the bunkered green complex on hole six and the rock wall on the seventh tee, and the views from E, 136th Avenue and Washington Street are more inviting than ever, with a view of the lake on hole nine and the one between numbers 10 and 18.

Thorncreek’s updated clubhouse is also a drawing card. Designed by D2C Architects and built by Mark Young Construction, the structure boasts a modernized golf shop and inside seating area that leads to a 2,000-square-foot covered outdoor patio area with big-screen TVs and access to the bar and restaurant, which is now served by a greatly expanded commercial kitchen. The all-weather space will be ideal for lunch, dinner and tournament groups.

The new practice facility boasts a 320-square-yard teeing area, well-marked target greens and a 13,000-square-foot putting green. To improve pace of play and promote use of skill-appropriate tees, the course has replaced the color tee system with a numerical one gauged by handicap and driving distance. The One tees are for 0-4 handicaps who drive it more than 275 yards; the Twos, 5-10 and 250-275, and so on. The men have five sets of tees instead of four; the women three instead of two. From the tips, the slope rating has gone from 73.8/130 to 72.8/134—a one-stroke differential that’s roughly the same from the other tees.

“It’s not going to be as punishing but it’ll still be a challenge,” Swinhart says. “We’ve taken everything up a few notches.” thorncreekgc.com

Colorado AvidGolfer is the state’s leading resource for golf and the lifestyle that surrounds it, publishing eight issues annually and proudly delivering daily content via coloradoavidgolfer.com. This article appears in the Gallery section of the 2018 August Follow us on Twitter, Facebook and Instagram.