Teeing Up a Celebration in San Antonio

As San Antonio turns 300, there's more to remember than the Alamo. Take a River Walk with editor Jon Rizzi and see what the tricentennial celebration is all about. 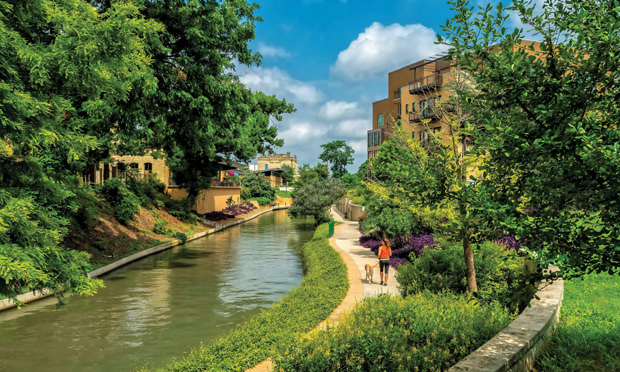 As San Antonio turns 300, there’s more to remember than the Alamo.

I’m standing about four feet off the green on the par-4 11th hole at the stunning AT&T Oaks Course at the JW Marriot San Antonio— better known as TPC San Antonio, the site of this month’s Valero Texas Open. Fifteen feet separate me from par. With me ball nestled on the Bermuda fringe, I elect to putt.

“Guess you don’t want to make it,” my playing partner, Gene Fowler, says.

Gene, my wife’s cousin and no relation to Rickie—although he jokingly refers to the PGA Tour star as his “love child”—isn’t trying to get in my head; he’s quoting his one-time teacher. “Mister Runyan would always say that,” Gene explains. “He thought you should be able to chip in everything around the green.”

Mister Runyan? So, while I’m trying to pull off a shot I saw Brooks Koepka make in last year’s Texas Open, Gene’s invoking World Golf Hall of Famer Paul Runyan, the owner of 29 PGA Tour titles, two major championships, and one of the greatest short games in golf history.

It turns out Gene, who came to golf as an adult, earned from the 5-foot-7, 125-pound Runyan, known as “Little Poison,” who was director of golf at Denver’s Green Gables Country Club in the 1970s and early 1980s.

I stick with the putter, and prove Mr. Runyan correct.

Gene’s revelation represents just one of many discoveries I made during a long weekend in the Alamo City.

Chief among those is that the Alamo may be well worth remembering as the site of a heroic battle during the Texas Revolution, but the iconic limestone structure in downtown San Antonio underwhelms many of its 2 million annual visitors.

Fortunately for San Antonio, the Alamo is an outlier in this charming, diverse and vibrant metropolis that annually welcomes more than 34 million tourists. The Alamo City—which, like its eponymous mission, commemorates its 300th anniversary this year— has plenty to celebrate.

Since it began hosting the Valero Texas Open in 2010, the 7,435-yard Greg Norman/Sergio Garcia-designed AT&T Oaks Course at TPC Antonio has consistently ranked among the 10 toughest courses on the PGA Tour. Rumor has it that Norman, coming off his divorce from Chris Evert and partnered with Garcia, his daughter’s then-boyfriend, took out his frustration on the course.

Hundreds of live oaks and varying fairway widths make the layout challenging—especially when the winds howl—but great fun. The long tight, par-4 4th is a beast, and even if you shoot a quintuple bogey on the par-4 ninth, you’re doing better than Kevin Na, who carded a 16 here in the 2011 event. Sixteen also happens to be the number of the par 3 that features a bunker in the center of the green.

The TPC represents one of three Texas Open sites on my Alamo City itinerary. The other two are the 102-year-old A. W. Tillinghast layout at Brackenridge Park Golf Course, which hosted the event 21 times, and the 1995 Tom Weiskopf/Jay Morrish design at La Cantera Resort, which hosted 15 times before the event moved to the TPC.

Old Brack linchpins the eight-municipal-course Alamo City Golf Trail, houses the Texas Golf Hall of Fame in its wonderful old stone clubhouse, and hosts events in a separate building once occupied by the studio of famed Mount Rushmore sculptor Gutzon Borglum. Part of the five-star resort and spa, La Cantera’s Resort Course complements its Palmer Course, designed by The King, with its majestic clubhouse occupying the highest point on property.

Both endured significant renovations. The arrival of Highway 281 and Interstate 35 in the 1960s disfigured the original course, reducing it by 10 acres, but TLC over the years has kept Old Brack relevant and challenging. With the PGA Tour no longer played there, management has adjusted the extremity of many of La Cantera’s greens and approaches and reduced the environmental impact by allowing formerly maintained areas to return to native.

Both Brack and La Cantera have witnessed PGA Tour history. At the 1955 Texas Open at Brackenridge, Mike Souchak tied what was then a single-round record with a 60 en route to a Tour-record 257; nearly half a century later, at the 2003 Valero Texas Open at La Cantera, Tommy Armour III carded a PGA Tour-record 254—the number that happens to be the name of the new clubhouse grille.

Souchak’s round wasn’t even the lowest ever shot at Brack. As I learned from the photos and items in Old Brack’s wonderful stone Tudor clubhouse, Jug McSpaden carded a course-record 59 during a 1939 exhibition played with Byron Nelson, Ben Hogan and guess who? Paul Runyan.

…AND THE ALAMO CITY

Situated 20 minutes north of downtown, La Cantera Resort & Spa is far more than a home to two golf courses. Its Loma de Vida Wellness Spa now occupies the championship teeing area from which PGA Tour players would begin play during the Texas Open days. The par 5, though more than 120 yards shorter from the tips now, still ranks as the course’s no. 1 handicap hole, and the spa—with over-the-top treatments and resting room overlooking the foothills of the Texas Hill Country—rates as the five-star resort’s no. 1 non-golf amenity.

Tied atop the leaderboard is Signature, the resort’s gourmet restaurant. Located in a stately stable-like building once inhabited by the resort’s golf learning center, Signature spotlights the cuisine of renowned Chef Andrew Weissman. Crisp and creamy, his seared Hudson Valley foie gras is sublime, as is the hearty cioppino, with its fresh fish and spicy bouillabaisse broth. The wine list spans continents, styles and price ranges, topping at $3,950 for a bottle of 2005 Domaine Romanée-Conti pinot noir.

UNESCO has designated San Antonio a Creative City of Gastronomy, the only U.S. city besides Tucson to achieve this distinction. Its blissful confluence of Mexican, Spanish, German and French cuisines manifests itself throughout the city’s restaurants. With two locations, Rosario’s ranks as the city’s top spot for Mexican. Nao, the restaurant run by students and graduates of the Culinary Institute of America’s San Antonio campus (the only others are in New York and San Francisco), focuses on live fire cooking and delectably inventive creations like duck flautas and Serrano croquettes.

You’ll find Nao and the Culinary Institute at Pearl, the coolest “mall” in San Antonio. The 22-acre mixed-use space repurposes many of the buildings, equipment and materials from the Pearl Brewery, which operated between 1883 and 2001, to create a hip, LEED-certified neighborhood of shops, offices, apartments, restaurants and the stunning Hotel Emma (named after the widow of former brewery owner Otto Koehler, who was rumored also to have two mistresses with that same name). Exposed brickwork, repainted pumps and brewing equipment highlight the spacious lobby.

Repurposed doors, glass, basins, bricks, steel beams, tin ceiling tiles, longleaf pine planks and other reclaimed items— including a drill press and slicer-define Cured, a restaurant so named for the meats curing in the glass case near the entrance. The brewery’s original fireproof vault stands at the end of the custom zinc-topped bar. Featuring a spectacularly diverse charcuterie plate (including hot goat sausage), as well as burgers with onion jam, pig cheek poutine, masa fried oysters and other culinary curios, the quality and uniqueness of Cured’s fare are every bit the equal of its distinctive ambience. 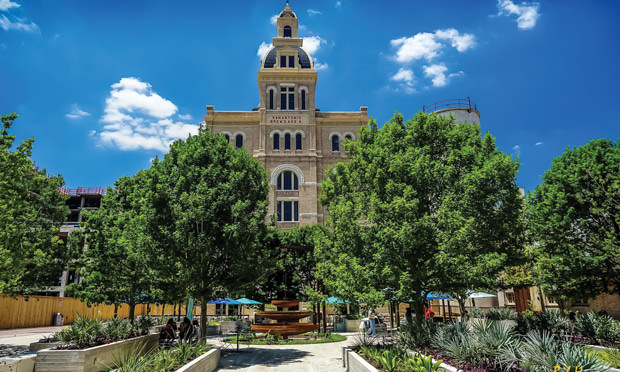 You can access Pearl via the famous San Antonio River Walk. The riparian thoroughfare stretches 15 miles, linking the city’s UNESCO-recognized missions (Concepción, San José, San Juan Capistrano and Espada) at its southern end to Brackenridge Park, San Antonio Zoo and Witte Museum in the north. In between are the bustling districts of Southtown, King William and Downtown, where restaurants, bars and shops, theaters and museums.

The River Walk also connects you to the many events and activities associated with San Antonio’s yearlong tricentennial celebration (visit sanantonio300.org for a calendar).

A stirring way to appreciate the scope of the city’s heritage is “The Saga,” a free world-class video art installation on the façade of San Fernando Cathedral, the oldest operating sanctuary in North America, in the city’s Main Plaza. Created by renowned French artist Xavier de Richemont, “the Saga” visually and musically consolidates the history of San Antonio into 30 minutes every Tuesday, Friday, Saturday and Sunday.

Jon Rizzi is the editor of CAG. For more information, go to visitsanantonio.com and sanantonio300.org.