Juice Up Your Swing 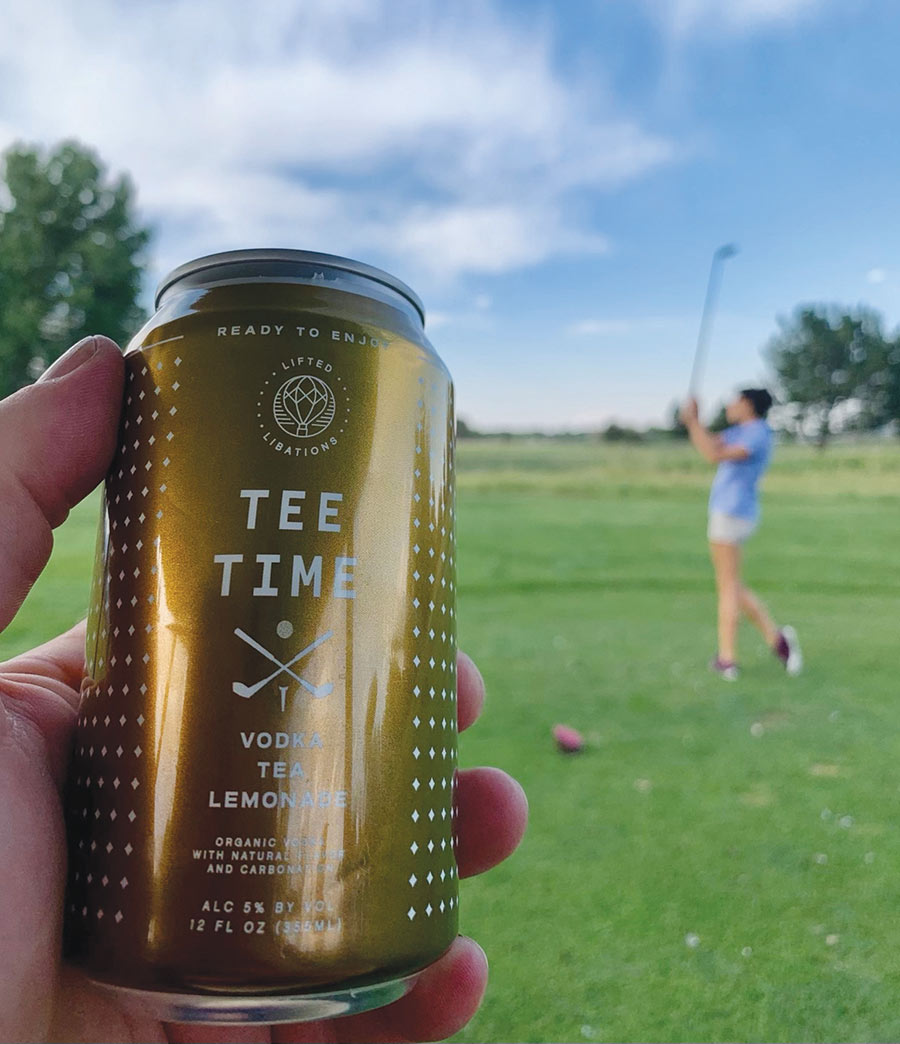 The perfect mix of soda, cocktails and golf inspired a Denver-born line of organic hard seltzers.

YOU HAVE TO LOVE a story that boils down to two great things: golf and cocktails. That two-some has been tight since ancient Scots drank a wee dram on the world’s first links.

This tale starts with Drew Fulton, a golfer who co-created an organic, artisan soda company to make high-quality cocktail mixers, and a hard-seltzer business to can ready-to-drink golf cocktails inspired by “swing juice.”

“At the golf course you’d always see guys coming into the turn saying ‘I gotta get some swing juice,’” Fulton says.

TO THE GAME BORN

Golf has always been stitched into the life of this jocular Golden-raised “kid.”

“I’ve been golfing my whole life. My one grandfather lived on a golf course. In the evening he’d let me go out and play the hole behind his house. My other grandfather had his own golf cart. I still play every Sunday with my wife and young kid,” says Fulton, who has worked at three local courses including Willis Case, primarily, he adds, to keep on playing.

With a hole-in-one to his name, Fulton does have another claim to fame. “I once golfed one round every month for over five years in Colorado. It’s not easy in January or February to keep the streak alive,” he says with a belly laugh.

His streak only ended when his soda business took off. Fulton had co-founded Denver’s Rocky Mountain Soda Company and the hard seltzer-focused Lifted Libations with childhood buddy “Moose” Koons.

“We started the soda company because Moose was part owner of a distillery in Palisade,” he says. “I was visiting there one time, and they were mixing their cocktails with Big K soda out of a plastic jug. That was all they could get, but we thought there had to be something better.”

When a nearby craft brewery closed, the duo decided to buy its bottling line and launch a line of upgraded artisan sodas.

The turning point during soda-making training also turned his stomach. “This guy warned us about mixing disodium benzoate with citric acid because you can create benzene—a known carcinogen. I didn’t think that was cool. I decided to learn how to do it the right way without any preservatives,” he says.

Boulder Birch Beer has a cult following. And if you’ve sipped cocktails at local establishments, you’ve probably tasted these sodas. “I created most of these flavors with different alcohols in mind,” Fulton says.

That devotion to flavor and ingredients also inspired Fulton and Koons when they looked into canning hard seltzer and cocktails.

“I tasted all the big hard seltzers and there are two dirty little secrets about them. Almost all of them are made with malt liquor (high alcohol beer). They use a lot of sweeteners to make that malt palatable, but they don’t have to list them on the label,” Fulton says.

These tastings brought back youthful memories for Fulton: “What’s crazy is that, growing up in Golden, we had a lot of contact with Zima,” he says. Zima was Coors’ premature stab at a clear malt-liquor beverage. The duo’s new enterprise, Lifted Libations, started with the Soda Club, a line of simple, fruity hard seltzers (including Currant) with organic vodka. These appeal to those avoiding sugar, carbs and calories.

Given the fact that the entire soda/seltzer staff plays golf, the company’s big idea was to create ready-to-drink cocktails good enough for the course.

“Having someone mixing your drinks at the cart takes time and slows play, so having a nice cocktail that’s already made speeds things up. As a golfer, I really appreciate that,” he says.

In 2019, Lifted Libations debuted Tee Time, an homage to Arnold Palmer’s namesake beverage—plus organic vodka. “Arnie actually preferred his drink to be a 70/30, tea to lemonade. Most people think it’s supposed to be half and half,” Fulton says.

Tee Time features organic lemonade plus black tea brewed in-house and a decent caffeine kick. “It’s great on the back nine for a little boost,” he says.

Fulton’s obsession with taste and ingredients is a big plus if you like transparency in your food and drink.

“I can count all the ingredients we use on the fingers of one hand—mainly organic vodka, organic extracts, and vegan sugar,” he says, explaining that, unlike most white cane sugar, his is not bleached with charcoal made with charred beef bones. “That’s how I want it. My job has always been to create things that are delicious to me,” he says.

As a fan of the Moscow Mule, Fulton crafted Rocky Mountain Soda Co.’s best-selling Golden Ginger Beer for mixing that drink. “I like Moscow Mules that are really spicy with lots of ginger and just a little lime,” he says. “That’s how I wanted our Mile High Mule to taste.”

Clearly delighted to be introducing his new products, Fulton admits to an ulterior motive. “The great thing about golf is that, wherever you are around the world, the local golf course is usually a pretty nice place to go,” he says.

“My goal is to sell these seltzers and have to visit all these great golf courses,” he says, again punctuating it with a deep belly laugh.

MY EXPECTATIONS were admittedly low when samples arrived from Denver’s Lifted Libations. So I was pleasantly surprised to find they taste like the cocktails they mirror. The flavors are true, and you can taste the vodka.

As a big iced-tea fan, I like that the Tee Time hard seltzer uses organic black tea from Denver’s Teatulia brewed in-house. The black tea and organic lemonade flavors are legit, not too sweet and the caffeine is a nice perk.

Swing Juice and Lifted Lemonade are both refreshing with true flavors and no weird aftertastes. My favorite is the Mile Hi Mule because I’m fond of that kind of ginger bite. Another plus: Each can of Lifted Libations packs only 150 calories with 5 percent alcohol by volume.

Because they are taxed as “spirits” rather than as “beers,” Lifted Libations cost more than malt-liquor-based hard seltzers. These ready- to-drink cocktails are well worth it if you put a premium on taste and consuming healthy, organic ingredients. —JL

John Lehndorff is the former Dining Critic of the Rocky Mountain News. He writes Nibbles for the Boulder Weekly and hosts Radio Nibbles on KGNU (kgnu.org).

This article was also featured in the August/September 2021 Issue of Colorado AvidGolfer.