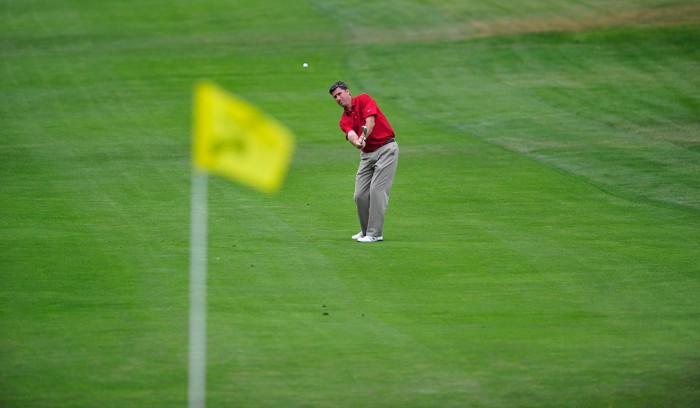 We’ve all seen the PGA Tour players hit that low-trajectory, high-spin 50 yard pitch and stop shot that everyone drools over, but very few amateurs can do (at least on purpose). It’s not as hard as you think and with a little bit of understanding as to what actually makes the ball have enough backspin to hop once and stop on a dime, you can hit that shot too. 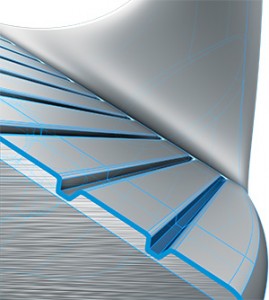 The first thing that needs to be understood is what generates backspin. Let’s get the easy stuff out of the way—your equipment. If you’re playing with either a dirty wedge or a wedge that has worn down grooves, you won’t be able to hit this shot. You need fresh wedges if you want to put enough spin on the golf ball. Speaking of the golf ball, what kind of ball do you play? Like the old adage says, you get what you pay for. If you paid $15 for a dozen and got three more free, that’s great! But good luck getting the ball to stop anywhere on the putting surface. As a general rule with golf balls, you do get what you pay for but there are some “tour worthy” balls out there that won’t break the bank. Talk to your GolfTEC Coach and ask what ball they recommend for your game; the answer may surprise you!

With the equipment discussion out of the way, let’s talk physics. Friction is the king of generating backspin, and if you don’t have friction you can’t have backspin (hence the equipment discussion first). Let’s explain something with your wedge. The place on the clubface that will generate the friction needed is NOT the center of your club. We’ve all likely hit this shot by accident at some point, where you hit the ball on a groove low on the club, launching it lower and getting it to stop cold. The low-center of the face is the place where the ball spins the most. Some describe this shot as being hit “one groove low” from the sweet spot, meaning the shot might feel like it’s hit thin but really hit lower on the clubface. Keep this in mind—the ball will come out lower and faster when you hit the ball here. You’ll need to find the threshold where the trajectory is too low and work it back to a good launch height for your game.

The next factor is speed; it’s just simple science, the faster you swing, the more friction you generate. So, you’re more likely to spin the ball from a shot allowing for a faster swing, for example 50 yards as opposed to 10 yards.

The last factor that we’ll discuss is something called “spin loft,” which is explained in the diagram below: 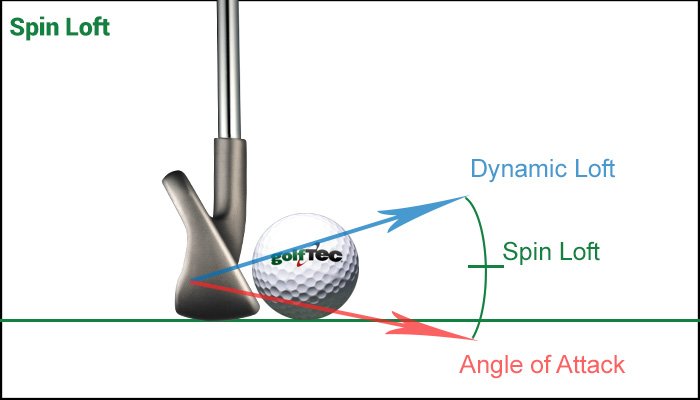 Essentially, the bigger separation you have between the club’s angle of attack and the loft of the club at impact, or the dynamic loft, the more spin loft you can generate and, therefore, the more spin. You will find that there is a threshold where you have too much spin loft and the ball high on the face, thus reducing the friction (which again, is king for spin). Based on Foresight launch monitor testing, we’ve found the optimal spin loft to be around 45º, with friction being reduced as the spin loft increases from there.

Okay, physics class is over so how do we execute this shot? First things first, start with you sand wedge. Based on the following shot execution, the sand wedge will give us the best chance to get to the optimal spin loft of 45º the easiest. 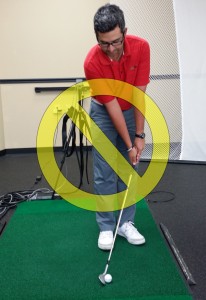 For the setup, many golf articles have you setting up with the ball back in your stance, the handle and hands pressed forward, and de-lofting the club with no release of the hands at impact (illustrated in my first setup at right). This promotes minimal spin loft and a strike of the ball higher on the clubface, reducing friction. So it’s no wonder amateurs can’t spin the ball around the green! This shot is good to have, but it won’t help us execute the 50 yard pitch and stop shot we’re trying to do here.

Used by many Tour players, the setup I would prescribe for hitting the one hop and stop shot features the ball played in the middle of your stance while keeping the handle almost vertical with an ever so slight forward press to get closer to the optimal spin loft. On the downswing and followthrough, the club should exit to the left, often aided by a break in the elbows (illustrated at right below). A Tour player that uses this followthrough often in his short game is Jordan Spieth. Think of his flop shot on the 18th hole at the 2015 Masters. While he was playing a different shot, he executed the followthrough needed for the shot we’re working on. When executed correctly, you won’t take a large divot with this shot and instead are “thumping” the grass. This will allow you to capitalize on the optimal spin loft with a slightly faster swing speed and expose the lower portion of the clubface (think 1 groove low as described earlier) for maximum friction, meeting all three keys to maximizing spin. Check, check and check! 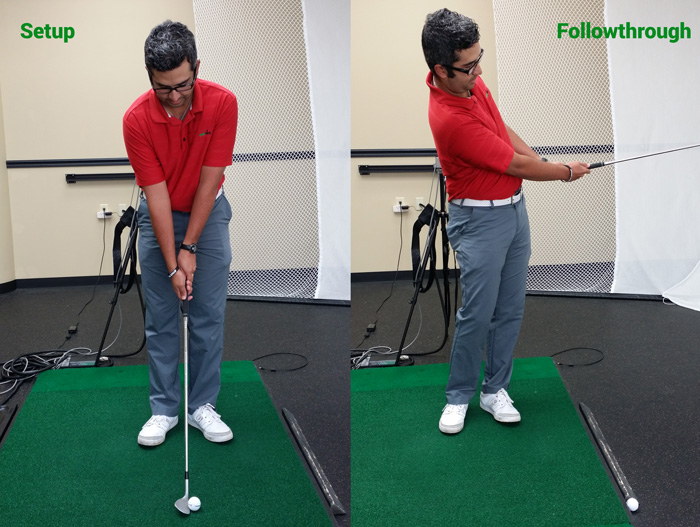 To quantify the change in spin rate from the first swing (ball back in the stance and hands forward) versus the new setup, I measure a few shots on our Foresight GC2 launch monitor. The backspin went from a measly 5562 RPMs in the first swing to a whopping 8125 RPMs with the same distance—a significant jump in spin! Some Tour players hitting this shot get over 9000 RPMs. Do you know how much spin you generate when hitting this shot? If it’s closer to the 5500 number, you will have a difficult time executing this shot to perfection.

Find out what your spin rate is with your local GOLFTEC Coach and maximize your spin to hit this shot today.