Five Great Places to Play Like the Pros in Arizona 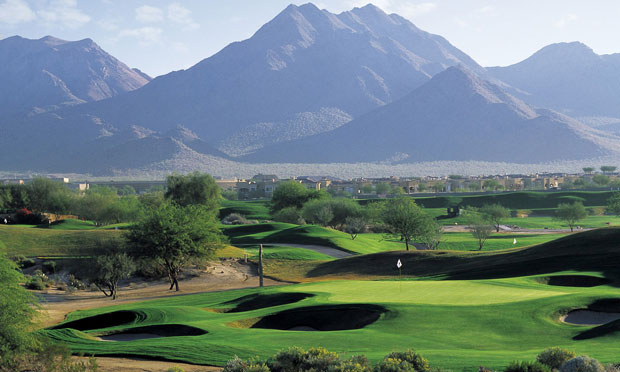 Whether it’s the Waste Management Phoenix Open or stops along the mini tours, you can tee it up like the pros at a number of Arizona locations.

The 16th hole at the PGA TOUR’s Waste Management Phoenix Open looked a little different during this season’s event. The 163-yard par-3 is usually the most raucous spot on tour, the closest thing the circuit gets to the fan experience usually found in NBA arenas or sold-out NFL stadiums.

That, of course, changed because of the novel coronavirus. But while the ongoing pandemic kept fans largely out of the equation, the players were there—and right about now, given the massive snow dump that Colorado received over the weekend, chances are you wish you could be there too. The good news is, now that the runways at Denver International Airport are (finally) reopening, the only thing stopping you from doing your best Tiger Woods or Rickie Fowler imitation at TPC Scottsdale is hopping on a flight.

While there are currently only a couple of options for local avid golfers to tee it up where there the pros play—think TPC Colorado, home of the Korn Ferry Tour’s TPC Colorado Championship, or Green Valley Ranch Golf Club, which often attracts a number of big names annually for the CoBank Colorado Open—opportunities abound in The Valley of the Sun.

Of course, TPC Scottsdale’s Stadium course has hosted the PGA TOUR stop for the last 34 years, but apart from that it’s wide open (figuratively speaking, that is) and available for public play. Meanwhile, the Outlaw Tour, an Arizona minor league circuit that always draws a number of Colorado players throughout its lengthly schedule (from September to the following June), fills that slate with a number of excellent public tracts.

Here are some of our favorites:

AK-CHIN SOUTHERN DUNES: South of Phoenix and sprawled across 320 acres, part of the Ak-Chin Indian Reservation, this Fred Couples and Schmidt-Curley-designed Troon golf course was created in the tradition of some of the world’s most coveted courses. Renovated in 2014, it’s a regular on local and national lists of The Best Courses to Play in Arizona.

GRAND CANYON UNIVERSITY: Once regarded as a run-down muni, in 2014, Grand Canyon University announced an agreement with the Phoenix Parks and Recreation Board to redesign and manage the former Maryvale Golf Course. After a $9 million renovation project, GCU Golf Course (still part of the City of Phoenix) opened in January, 2016.

LONGBOW GOLF CLUB: Named after the Apache Longbow helicopter, which was manufactured by Boeing (and located across the street from the club), this Mesa course opened in 1997. Besides the Outlaw, it’s also hosted hosted events on the Symetra Tour, the minor-league feeder to the LPGA Tour.

MCCORMICK RANCH: Family-owned and operated since 1979, you’ll have a blast on the 408-yard, par-4 ninth, where a tee shot that’s struck too well might just run through the hole’s island fairway.

Want to read more about golf in Arizona? Visit our TRAVEL ARIZONA Page.