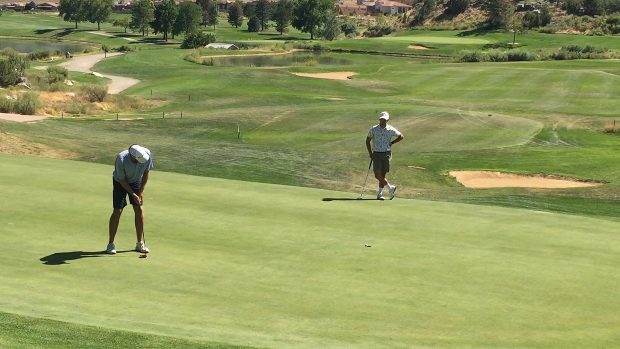 As Sam Saunders shoots a Sunday 60, Californian Ben Corfee beats him by 4 shots.

Ben Corfee had never played Grand Junction’s Tiara Rado Golf Course before last weekend’s Rocky Mountain Open Presented by Sinclair Oil. But the 25-year-old UC-Davis graduate played the tight 6,442-yard par-71 layout at the base of Colorado National Monument with the expertise and confidence of a native.

Corfee led after each of the first two rounds, shooting a 63 and 67 to start the third and final round at 12-under-par, one shot ahead of Ryan Schmitz of Littleton.

That margin remained until the par-5 sixth, when Schmitz carded a quadruple-bogey nine as Corfee birdied—a five-shot swing that took the Coloradan out of the running.

Corfee’s lone bogey on Sunday came on the par-4 10th. He then proceeded to birdie three of the next six holes, stretching his lead to four shots.

With that cushion, and with others in his group hitting driver and 3-wood to drive the green on the 340-yard finisher, Corfee calmly laid up with 9-iron to 165 yards.

He stuck his approach to 12 feet and then this happened:

For Corfee, who only made one cut in six events on this year’s PGA TOUR Latinoamérica, the win was particularly gratifying: “I don’t usually do well on these types of courses—where the greens are really tricky and fast, and where length isn’t as huge a factor because there are creeks and ravines, so you have to hit a lot of irons off the tee.”

As he walked into the clubhouse to sign his card, the winner ran into CoBank Colorado Open champion Sam Saunders, with whom he’d played in the Long Beach Open.

Saunders had an eagle and nine birdies—including three on the last four holes. His 11-under-par total—11 shots better than the 71 he’d fired the previous day—tied the tournament record set in last year’s final round by Brandon Bingaman, who lost in a playoff to defending champion Justin Keiley.

Saunders’ score matched his record-setting final round at the 2018 CoBank Colorado Open, which he also would lose in a playoff—to Dru Love.

With a 199 total, Saunders tied for runner-up with recent Colorado State University graduate Jake Staiano, who closed with a nine-birdie, two-bogey 64, and former University of Arizona star Kolton Lapa, who was playing in only his third professional tournament and tallied nine birdies and three bogeys on Sunday.

With Sinclair Oil as title sponsor in the first year of a three-year $75,000 deal, the $59,692 total payout for the three-round event marked the highest in the event’s 81-year history.
On the amateur side, Tyler Severin, a University of Wyoming sophomore from Johnstown, went 70-68-70 to finish 5-under par, taking low-amateur honors. Gary Carpendale’s 10-over par earned the Las Vegas resident the senior amateur title.
Enstrom Candies CEO and President Doug Simons—who, along with Colorado Golf Hall of Famer  and Monument Oil President Paul Brown and ANB Bank Regional President Vance Wagner, purchased the rights to the Rocky Mountain Open in 2014—expressed the collective enthusiasm for an event that has contributed more than $100,000 to the Colorado Mesa University athletics department for scholarships and other needs.
“We’re well on our way to re-establishing this as a top-tier golf event,” he said. “We’re going to continue raising the purse and do great things for the community.”
See all results from the 81st Rocky Mountain Open Presented by Sinclair Oil.