Let tennis teach you how to draw and fade the ball.

TENNIS AND GOLF have more in common than their country-club pedigrees. Did you know that Rafael Nadal, Andy Murray and Novak Djokovic all boast single-digit handicaps? Or that four Wimbledon winners have gone on to play golf professionally? Tennis players make good golfers not only because they have great hand-eye coordination, but also because they train their hands and arms to react quickly in order to hit a variety of shots. Whether hitting a power return or a delicate lob, they understand how to release their racket as they hit a tennis ball.

The reason that golfers struggle with curving the golf ball on purpose is because they haven’t educated their hands and forearms properly to release the club at impact.

Even if you seldomly play tennis, you probably understand how to hit a top spin forehand or a cut spin lob. You use your hands and arms a certain way when you swing the racket to manipulate spin. When it comes to hitting draws and fades in golf, golfers ought to apply the same principles used in tennis.

Once you feel somewhat comfortable shaping the ball both ways, get into the habit of practicing hitting draws and fades back to back. Maybe you’ll find that you’re more consistent hitting one over the other. My preference would be to hit draws because the ball goes further. Either way, it’s good to have a go-to shot if your swing isn’t working that day. 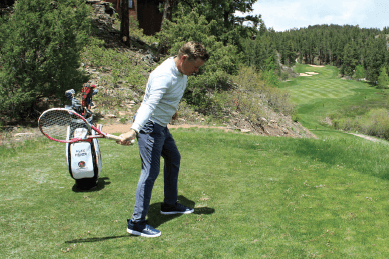 If you want to curve the ball left (draw for right-handed golfers) you need to mimic the feeling of hitting a top-spin forehand tennis shot. You must make your hands and forearms rotate counterclockwise slightly quicker than what you would normally do on a regular shot. To practice this, grab a tennis racket with your right hand and swing it like you are hitting a top spin. If you don’t have a racket, use your club and imagine it’s a racket. 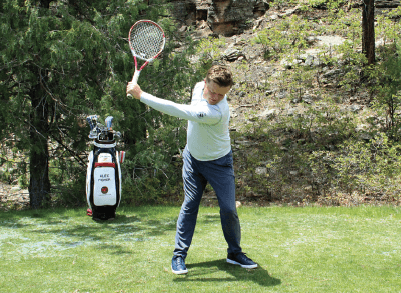 To hit a fade, you must do the opposite and mimic a cut spin lob tennis shot with your left hand. With a slightly open stance, make swings with the left forearm and hand rotating clockwise at impact. This will slow the rotation of the clubface as you hit the golf ball and leave it open to its intended target line. Practice this by doing the same thing with a tennis racket. With an open stance, hold the racket in your left hand and create the feeling of rotating your left forearm clockwise. 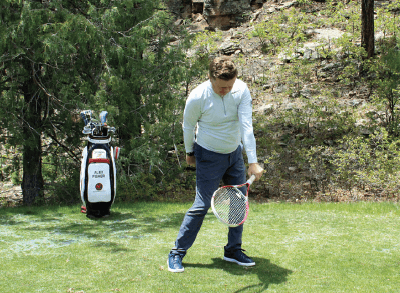 Once you feel like you can simulate that consistently, switch to a golf club and hit some balls again off a tee. Vary the amount of left forearm rotation to curve the ball.

Alex Fisher, the PGA Director of Instruction at Glacier Club in Durango, has been named one of “America’s Best Young Teachers” and a “Top 40 Under 40 Instructor” by Golf Digest, as well as Top 50 Instructor by US Kids Golf. Reach him at 602-363-9800 or [email protected].