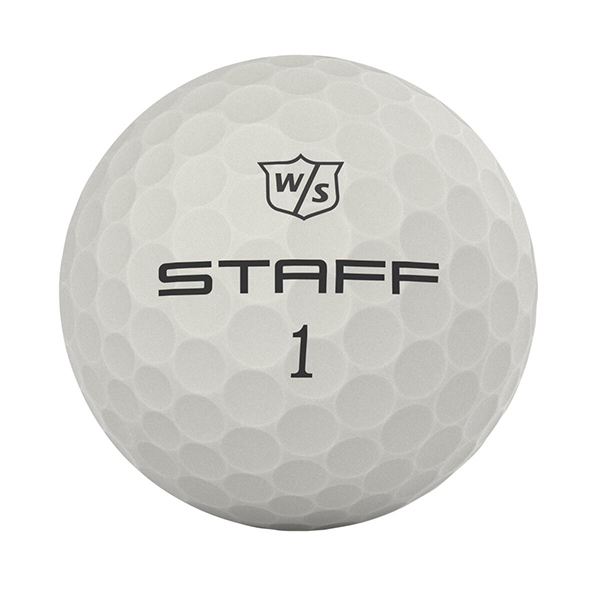 Wilson’s new Staff Model R golf ball has no paint. How does that affect its performance?

On learning Wilson had launched an unpainted version of the Staff Model ball it released in April, a thought sprang immediately to mind – golf balls are painted? I mean, of course they are, we all know that – they’re so perfectly white and are available in a variety of colors. Duh!

But how? Does an army of painters wearing painter’s caps stand at the end of the production line and paint each one with brushes as they pass by? Of course not; it’s a high-tech, highly-automated process in which unfinished balls sit on a tripod and are spun at tremendous speed while being sprayed with a very fine coating of paint ‘formed from a composition comprised of a resin system that includes a polymer component and a stabilizing component, wherein the stabilizing component is selected from the group consisting of ethylene oxide-propylene oxide block copolymers, poly C2-C3 alkoxylated C12-C18 saturated or unsaturated fatty alcohols, poly C2-C…’ you get the picture.

That leads to a second thought though – how can manufacturers be absolutely certain the paint is applied evenly, and what happens when it isn’t? Then a third – what are the benefits and performance characteristics of a golf ball that hasn’t been painted? And a fourth – won’t a ball that has no paint or a further layer of protective gloss get scuffed and stained easily?
In turn:

Even though every ball passes through rigorous quality checks, it is widely acknowledged within the golf ball industry that a tiny amount of pooling can occur in dimples. “Think of it like airplane wings with ice on them,” says Chris Cavallari, Wilson’s Global Business Director, Golf Balls. “If there’s more ice on one of the wings than the other, it’s obviously going to effect how the plane flies and the pilot will need to make compensations to keep it moving as intended.” 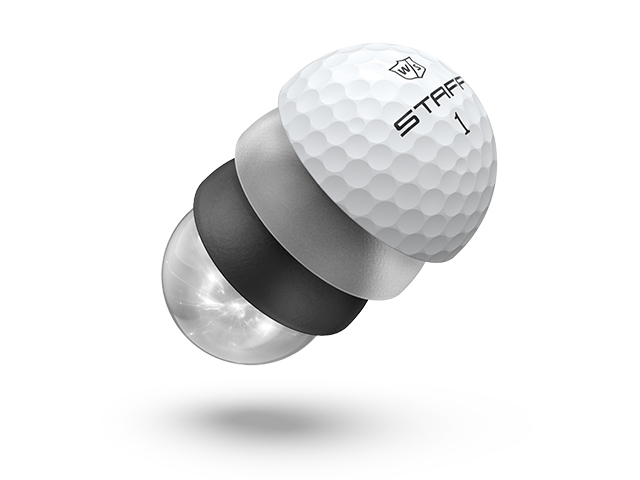 Cavallari says poorly-applied paint can result in 10-14 yards of dispersion and that in robot testing, the Model R’s dispersion was fractionally better than that of the original, painted Staff Model and significantly better than that of painted golf balls from competitors (though it should be noted the competitors weren’t identified and it’s possible – likely? – Wilson chose poorly-performing balls against which to compare its own).
Wilson is bullish on the quality and consistency of the paint on the original Staff Model saying in the overview on its web site “Since uneven paint can adversely affect performance, Staff Model is painted using a finely controlled application process that ensures every urethane ball leaves the factory with a nearly flawless finish. This means you can trust that Staff Model will always go where you need it to go.”
“We developed a proprietary painting system that ensures more consistent results than many of our competitors can achieve,” says Cavallari.

Besides the slightly better dispersion the absence of paint might create, an unpainted or ‘raw’ golf ball (that’s where the ‘R’ comes from) should, in theory, behave somewhat similarly to raw wedges in that it will create more friction at impact and, consequently, more spin. Therefore, it should check up on the green when hit with a short-iron, and be a little easier to control on shots from around the green. “You’re striking pure urethane,” says Cavallari. “When you touch the ball it just feels grippier.” But, and it’s an important but, that extra spin could result in the loss of a few yards off the tee and extra sidespin which would actually increase dispersion. Which is why the Staff Model R is classified as a ‘Player’s’ golf ball. ‘Players’, of course, tend to hit the ball squarely which means they create little sidespin – a great deal less than higher-handicappers whose hooks and slices might actually end up in even worse places with an unpainted ball. That said, high-handicappers have slower swing-speeds, so their shot-dispersion might not be affected so much.
All of which is to say the ‘R’ probably won’t perform well for players with fast swingspeeds but who make poor contact and create a lot of sidespin. 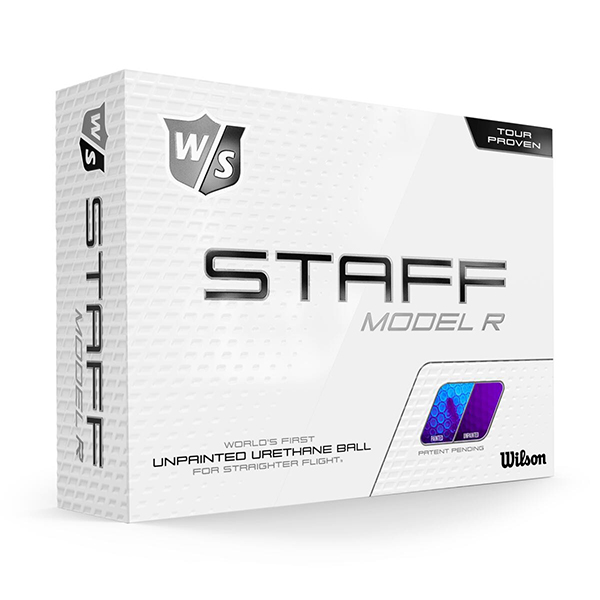 In a word – yes. Though how scuffed and stained it becomes depends on several factors – your angle of descent into the ball, the quality of strike, the course’s ground conditions, where on the course you hit it, the type of bunker sand etc, etc. Bear in mind, the ‘R’ might actually appear less scuffed than a typical painted ball because it’s the paint that scuffs, not the urethane beneath it. But it will very likely become discolored at some point. Cavallari says an ‘R’ will last anything between four and 12 holes. Though how you define ‘last’ is key. “Even though a ball might show a stain or some other mark after six holes, say, it will probably still be perfectly playable,” he says. “The player has to decide if a blemish or two is more important than the performance gains he had been getting. We actually have a staff player (several staff players on both the PGA and European Tours are currently testing the ball) who went 16 holes with one.”

Besides the lack of paint, the Staff Model R is exactly the same as the Staff Model featuring the firm, CIS polybutadiene, V-COR designed to generate maximum velocity off the clubface, the 362-seamless dimple pattern which creates a comparatively low trajectory, and two mantles (the inner mantle made of Dupont HPF, the outer Surlyn and other ionomers) making four layers in total. But, as Wilson says, this is the game’s first unpainted urethane ball which makes it a big deal. Cavallari says he has worked in golf ball testing for 15 years and not seen anything like it. “This is very exciting,” he says. “It’s something new and different, and could genuinely be a game-changer for you. We actually tested all our golf balls in an unfinished state before painting them. The performance benefits have always been clear to me, so I was excited when we made the decision to offer an unfinished ball.”

Whether or not it works for you depends on the dispersion you get, how much that extra spin helps you from 100 yards and closer, and how long you can tolerate a stained ball. The fact Wilson sold out of the first production run online within 48 hours suggests the performance benefits are real and that, for many, a stain or two really isn’t a problem.