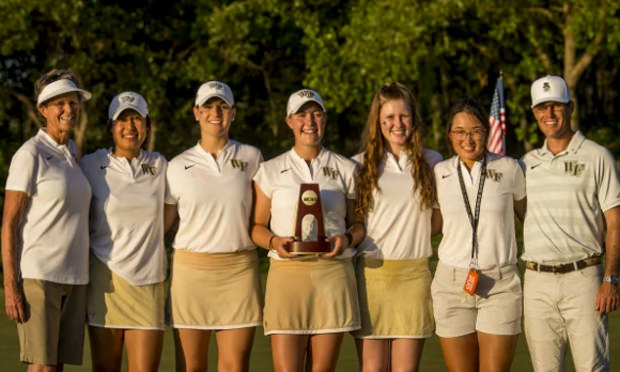 Redemption is oh so sweet!

One year after losing a two-shot lead with a triple-bogey on the penultimate hole of the NCAA DI Women’s Golf Championships, Wake Forest junior Jennifer Kupcho again faced down a 17th hole with water in play.

But, fueled by pouring in a monstrously long birdie putt on the 16th that gave her a two-shot lead, she confidently piped her drive down the center of the slender 17th fairway. She parred the the 390-yard hole without incident and would birdie the par-5 closing hole, taking an aggressive line off the tee to reach the green in two.

Redemption! After coming up one shot short last year, Jennifer Kupcho wins the Women’s #NCAAGolf individual title and earns a start in the @MarathonLPGA! pic.twitter.com/QXsKQyjFPL

After matching the single-round record for the course in her first round, Kupcho went on to shoot 1-under par 71 in her final round and posted a tournament score of 65-74-70-71 – 280. She became the first player to win an individual title the year after a runner-up finish since Susan Slaughter in 1989-90.

“I think [last year] kind of came up when I had the rough patch on the front nine, and then definitely on the 17th tee shot, just because it’s the same hole, and it was kind of a narrow tee shot all week,” Kupcho said. “Those are the two holes that it came up.”

Kupcho entered the round sharing a lead with Alabama’s Cheyenne Knight, but found herself four shots out of the out of first place after seven holes.

She righted herself with pars on holes 8, 9 and 10, and then birdied 11, 12 and 14 to climb back into the lead. She all but sealed her victory on the 16th hole where she drained her fifth of six birdie putts on the day.

Last year, Jennifer Kupcho led by two with two to play at the Women’s #NCAAGolf Championship.

This monster putt has put her right back in the same situation! pic.twitter.com/5S1er5vy2I

“It means a lot to me to have my teammates here supporting me and cheering me on all day … and my parents, on their anniversary to win it for them is really exciting,” Kupcho said. “To bring it back to Wake Forest for coach Dianne Dailey … She’s been here so long, and it’s great to get the first individual win on the women’s side.”

Two-shot lead on the 18th tee…

Kupcho finished two strokes ahead of Arizona’s Bianca Pagdanganan and Andrea Lee of Stanford (282). Lee moved up 11 spots in the final day of play and shot 7-under par 65 to match the course single-round record. It was her best performance of the tournament.