The Highlander underwent its first comprehensive redesign since 2014 last year; there is a new body, larger interior and more up to date tech, all based on the company’s TNGA-K platform. Most models run a carried-over 3.5-liter V6 with either front or all wheel drive. The hybrid model however has undergone a more radical surgery; gone is its six cylinder gasoline engine. The 2020 Highlander Hybrid is now motivated by a 2.5-liter four cylinder engine that runs a specific type of combustion technology known as Atkinson Cycle; combined with more efficient motor-generators and batteries, it improves EPA ratings by 6mpg—making it the most efficient 7-passenger crossover you can buy—and trimming mass by over 275 pounds. But total system horsepower drops from 306 to 243. The result is that 0-60mph acceleration is slower by roughly half a second—though it feels longer—and in independent testing its 50-70mph highway passing potency is more sluggish yet, with times increasing by about a second. The Hybrid drivetrain also feels less refined, since the four cylinders are inherently less smooth than sixes, especially under heavy load. During its test week, the Toyota didn’t often match its EPA numbers, meaning its real world fuel economy might only be 2-3mpg better than the older, faster, more powerful model. 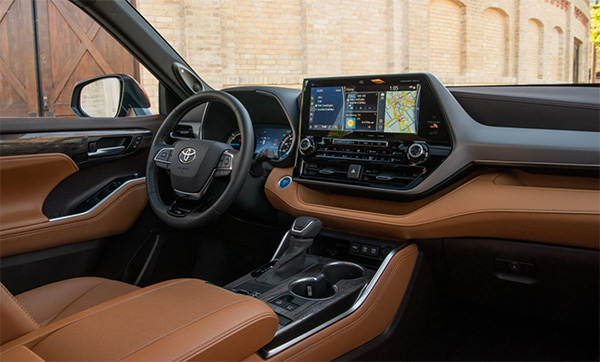 In other areas the Highlander has come along nicely. Its body is bold and expensive looking, its interior material quality (in the top, Platinum trim) posh, with nicer plastics and trim. Back seat space is still amongst the tightest in the class, but cargo room as increased significantly. The Highlander is best thought of as a four– (if it has center row buckets) or five–passenger crossover with occasional-use rear seats. The driver and front seat passenger are well catered to, with supportive chairs surrounded by soft touch materials and an enlarged version of the below-dash shelf for flotsam that was so useful in the older model. Boldly placed, the infotainment system’s 12.3in touchscreen is easy to reach but might benefit from more upscale graphics; most every driver aid is standard, including adaptive cruise, autonomous emergency braking, lane assist, auto high beams, blind spot monitors and rear cross path detection. A 1200-watt JBL sound system fills the cabin, well-lit by its panoramic sunroof, with decent sound.

The Highlander continues to be amongst the most refined crossovers, with very low levels of road and wind noise and an excellent ride. Its steering is now more accurate and body control better through corners—thanks to that new platform—and only a few competitors can match or beat it overall. Sadly, the Highlander has a towing rating that maxes out at 3,500 pounds, near the bottom of the class. In these days where seemingly everyone wants to get out into nature with their family, that is a limitation. Regardless, the Toyota will no doubt remain one of the most reliable crossovers you can purchase or lease and one with unrivaled resale value. That the Hybrid routinely gets 30mpg, or better, makes it a singular choice as well.

This article was also featured in the Winter issue of Colorado AvidGolfer.