From Tee to Shining Tee

From Tee to Shining Tee 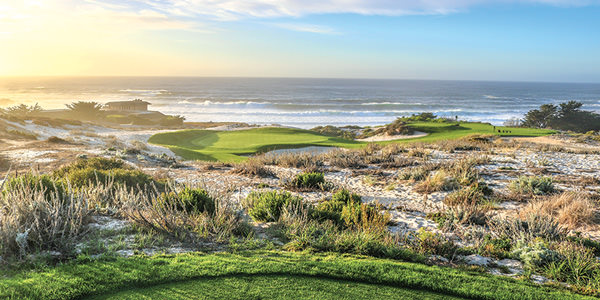 If America has a St. Andrews, this could very well be it. The legendary location on the Monterey Peninsula features the power trio of Pebble, Spanish Bay and Spyglass (as well as the underrated Del Monte and the par-3 Peter Hay), and sumptuous accommodations at The Lodge at Pebble Beach, Inn at Spanish Bay and Casa Palermo. Fairway One, the newest addition to The Lodge, opens late this summer, offering 30 oversized guest rooms and three two-story cottages overlooking the first fairway. One of a dozen memorable dining options, The Tap Room remains the classic choice for a post-round repast, and the Forbes Five Star Spa at Pebble Beach provides a 22,000-square-foot sanctuary for the senses. Pebble Beach will host its sixth U.S. Open in 2019 in celebration of the resort’s centennial. pebblebeach.com; 800-877-0597 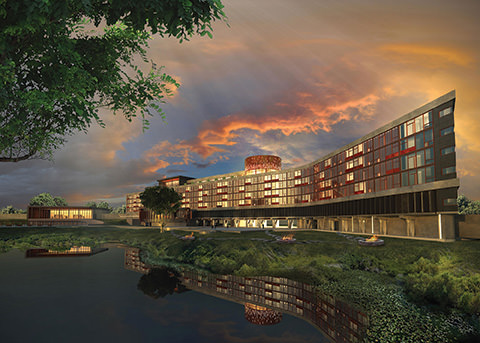 In the middle of Florida, some 3,300 miles from Oregon and less than 80 from both Orlando and Tampa, sprawls the Sunshine State’s inland answer to Bandon Dunes. Developed on thousands of sandy acres of a former phosphate mine, Streamsong hosts two courses—the Tom Doak-designed Blue and the Coore/Crenshaw-designed Red—that have garnered accolades from throughout the golf world. A third course, the Black, authored by Gil Hanse, will open this fall, and it could be the best of the bunch. All three are walking-only, unfettered by real estate, and ramble across land defined by dunes, hammocks, marshes, lakes and savannah. Guests stay at one of 216 custom-built rooms in the Lodge or one of the 12 in the Clubhouse. Dine in one of four sleekly appointed restaurants, luxuriate in the azure grotto of the AcquaPietra spa or shoot clays, practice archery, fish for bass or hunt waterfowl with expert guides. streamsongresort.com; 888-294-6322 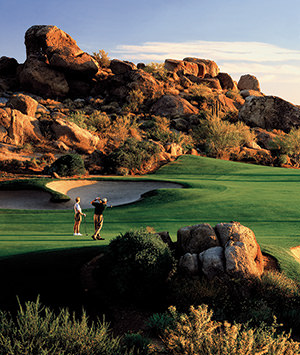 Find your true north at Troon North—a golf club featuring a pair of Tom Weiskopf-designed courses, the Monument and Pinnacle, punctuated by giant granite boulders and saguaro catci in the Sonoran Desert. The adjacent Four Seasons Resort blends cosmopolitan refinement and western touches in its 210 generously sized guest rooms, including 22 luxury suites, in 25 one- or two-story adobe casitas. The Talavera steakhouse features lively patio dining with killer sunsets and a fire-filled trough, as well as the adjacent, stylish Onyx Bar & Lounge. Proof, the resort’s unique comfort-food canteen, serves up American specialties like po’boys, chicken and waffles and heaps of nostalgia in old-fashioned soda fountain glasses. Hikers and fat-tire riders can tackle the nearby mountains, while the world-class Spa at Four Seasons Resort Scottsdale and aquatic center provide sumptuous rejuvenation and relaxation. Saturday nights bring complimentary “dive-in” movies at the pool. Live music and beer, wine and margarita tastings take place every weekend.
fourseasons.com/Scottsdale; 480-515-5700 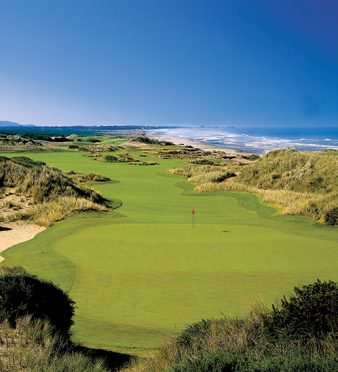 Since exploding onto the scene in 1999 with its David McLay Kidd-designed links on Oregon’s windswept southwestern coastline, Bandon Dunes has become a golf mecca, with the pilgrimage now much easier, thanks to a direct three-hour flight from Denver to North Bend (only a 35-minute drive from the first tee). Bandon’s four walking-only courses—Bandon Dunes, Pacific Dunes (designed by Tom Doak), Old Macdonald (Doak/Jim Urbina) and Bandon Trails (Bill Coore/Ben Crenshaw)—rank among the first 50 of Golf Magazine’s Top 100 in the U.S., and the 13-hole Bandon Preserve (Coore/Crenshaw) and 2.3-acre Punchbowl putting course add to the fun. You’ll experience indulgent onsite lodging at the Lodge and Inn (the spacious Grove Cottages are perfect for foursomes), dining at one of six restaurants (including the upscale Gallery Restaurant and Scottish pub-like McKee’s) and other amenities. The scoop from Bandon visionary Mike Keiser is that within the next two years a Gil Hanse-designed fifth course, called the Sheep Ranch, will debut on 300 cliff-hugging acres known as Five Mile Point. bandondunesgolf.com; 866-311-3636 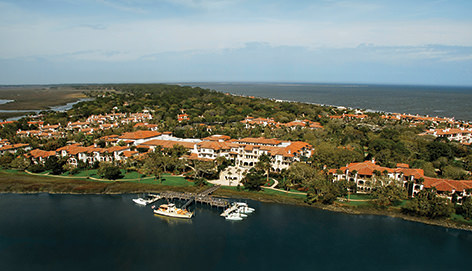