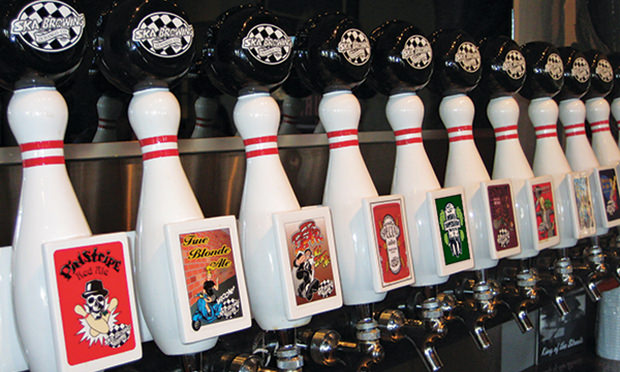 Durango. The name itself evokes the feeling of the Wild West. Although a regional airport satisfies those with an inclination towards expediency, a drive from any point in Colorado provides a treat. To the north lie the towns of Telluride and Ouray within the San Juan National Forest; to the east bubble the soothing thermal waters of Pagosa Springs; and west of town stands the archaeological majesty of Mesa Verde National Park. The southbound descent into Durango on US 550 is unmistakable, with painted mountains surrounding your approach.

Wanting to stow away as much protein and carbohydrates for a long and chilly round of golf, I head to CJ’s Diner, where most of the customers are greeted by first name, and the walls brimming with Dallas Cowboys football paraphernalia validate Durango’s status in the Texas Alps.

Armed with a full belly and an earful of local gossip, I head to Dalton Ranch Golf Club, a parkland layout embraced by mountain walls the color of autumn leaves.

The course mimics this severe yet welcoming landscape, lulling the golfer into a copacetic charm with its gorgeous scenery, all the while swallowing any errant or slightly mediocre shot. The word confident doesn’t come to mind on the initial tee shot for the first-timer. The course itself is not particularly long, ranging from 5,900 to 6,900 yards between the silver and black tees, but what respite you may gain in shorter yardage can easily be snatched away due to inaccuracy, especially on the back nine where water runs the length of many holes.

Dalton Ranch is truly a long-iron player’s dream and poor driver’s nightmare. The idiosyncrasies of the course, along with the mental challenge of shot-making, leave one wanting to race to the driving range for a tune-up and a second shot at this welterweight, who hits you with quick jabs and wears you down for the entirety of a round. Bruised, but beaming following a 18th-hole birdie, I eagerly set out for a drink. Durango boasts four breweries, but my informal poll of locals brought a unanimous suggestion of Carver Brewing.

Carver has the cozy and warm atmosphere one would expect at a neighborhood brewpub. The restaurant contains two bars and a spacious dining area, with a friendly and welcoming staff. Although it sounds trite, the resounding theme here is flavor is key. You likely won’t come across any experimental beers or unfamiliar styles, however the beers are crafted with uncompromising precision and just enough of a twist to make them exceptional.

The perfect example of this was the Tiny Trike Session IPA. The typical bitterness and hop flavors of an IPA shine through despite the low volume of alcohol. West Coast-style hop flavors of resin and spice meld with a juicy burst of citrus. A creamy mouthfeel provides the drinker with a much more satisfying full-bodied sip than the slightly thin body of most sessionable ales.

Perfect after a long, hot day on the golf course, the Lightner Creek Lager offers a keenly refreshing respite with honey crispness, balanced with a touch of bitterness and none of the wateriness found in typical American lagers.

For those looking for a heartier beer to go with one of the many savory dishes, classic Belgian-style brews are typically available, including a Belgian Dubbel, containing a slight nuttiness, and the characteristic spicy, fruity flavors derived from the specialized yeast. The Belgo Juice IPA brings the continents together with an abundance of sticky, resinous, American hop flavor, combined with a full-bodied and mouth-coating texture rife with clove and additional spice as it warms.

Following a dish of Mu Shu Pork, which went perfectly with a flight of beer with its varied flavors of ginger spice, sweet glaze and meaty umami, I set off for the vibrant and rock-n-roll inspired Ska Brewing.

Ska embraces the carefree and rebel spirit of the craft beer world both in its explosive beers and raucous taproom. The brewery and taproom are lined with gleaming metal, which reverberates with upbeat modern rock and ska music.

Keeping with the beat of the fast-paced tunes is Ska’s range of heavily hopped pale ales and seasonal stouts. The two must-try hoppy ales are Modus Hoperandi, a highly bitter IPA with flavors of pine and grapefruit, and Decadent Imperial IPA, another hop bomb, but with an added backbone of caramel sweetness.

Depending on the season, several unique brews are available, but the highlights are definitely the stouts. Flavorful additions include mint, malbec grapes, and mole spices. I was lucky enough to try the Autumnal Mole (pronounced mo-lay) Stout, a deeply rich, dark ale with flavors of cumin, pepper, chocolate, and cinnamon.

Durango boasts one of the highest numbers of eating establishments per capita in the nation. But it was its drinking establishments that filled my belly on this trip. But like the golfer who endlessly feels as though he has just breached the surface of his potential, I left knowing that I had gotten a small taste of all that Durango had to offer.