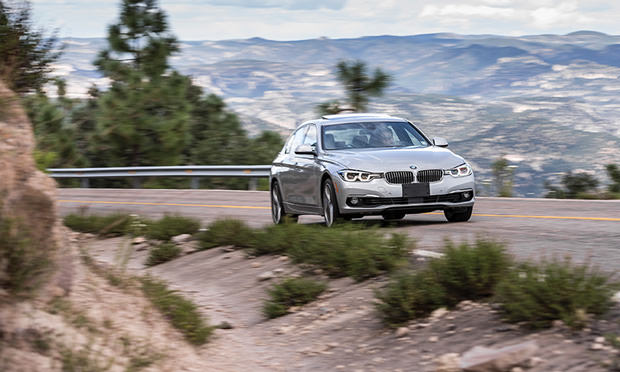 Comparing the BMW 3-series, Infiniti Red Sport 400 and Audi A4.

Sports sedans like the BMW 3-series have long served as the leading indicators of how competitive a company is in the premium segment. With crossovers outselling them at many companies, some people now question this metric. But not the automotive purists.

Is BMW’s current iteration of the 3-series—now called the 330i and 340i in four- and six-cylinder forms, respectively—still the benchmark despite being almost six years old? The competition is fiercer than ever: Besides the dynamically accomplished Lexus and Cadillac offerings, Alfa sells again in the States, Jaguar has a competitor in the XE, the Audi A4 is all-new from last year and the 2018 Infiniti Q50 has undergone a thorough update to its powertrains, chassis and other systems over the past 12 months.

It’s time to see if the BMW (pictured above) still has what it takes.

The Bavarian name games denote a new, modular range of engines, slightly more powerful and substantially more efficient. The 2-liter B46 in the 330i has outputs of 248hp/258lb-ft, and the 340i’s 3-liter inline six B58 is rated at 320hp/332lb-ft. Both are smooth, lag-free offerings that—like many German powerplants—seem to outperform their numbers. The 330i will hit 60mph in the low-5s, the 340i about a half second faster.

The four cylinder’s lesser mass means the BMW is slightly more responsive to inputs; updates to the steering and suspension linkage made in 2016 help it respond more like the Ultimate Driving Machines of yore, but the near-telepathic link between driver and car isn’t there as it is in a Cadillac ATS or Jaguar XE.

However, those two aren’t nearly as complete a package as the 3-series, whose latest iDrive system, intuitive voice command system and other essential (wo)man-machine interfaces are much better resolved. 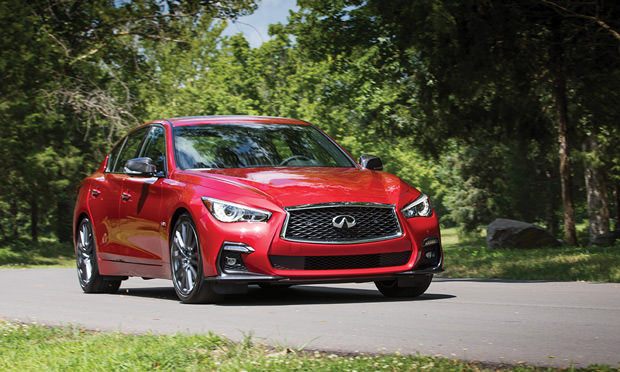 Infiniti’s 2017 update of the Q50 series is thorough and overall quite well done. Copious chassis revisions to geometry, damper and bushing response mean it rides and handles very well now, and the Red Sport 400 model, with its adapative Dynamic Digital Suspension, really knows how to straighten out a curvy road.  Infiniti should be lauded for being the first major manufacturer to spec fly-by-wire steering, and the revised Q50 system—optional unless you want driver assist systems, where it becomes standard—is now much less objectionable than it was a few years ago. It doesn’t approach the intuitive response of the Cadillac, Jaguar, Lexus or BMW, but it’s no longer a deal breaker.

The more conventional steering that is available on the Q50 is really quite refreshing, as the electric motor is now mounted on the steering rack itself, and works as well as many of the prior decade’s best hydraulic-assist setups.

Infiniti is playing the value card on the Q50; the basic 2-liter—powered by a torquey and smooth, 208hp/258lb-ft Mercedes-sourced engine—is a strong contender, and the twin-turbo 3-liter V6s, in 300hp/295lb-ft and 400hp/350lb-ft form (there’s also a 360hp hybrid), are priced substantially less than BMWs of similar output.

These boosted sixes are really thrilling, and the shift programming of the corporate seven-speed auto now approaches the transparency and slickness of the eight-speed shared by BMW and Jaguar, as well as Audi’s twin clutch. Interior quality is superb—probably better overall than the BMW—but the updated InTouch interfaces still aren’t as well resolved or easy to use as the German cars’ and the lack of such options as ventilated seats, a heated steering wheel, or head up display date the Japanese machine. 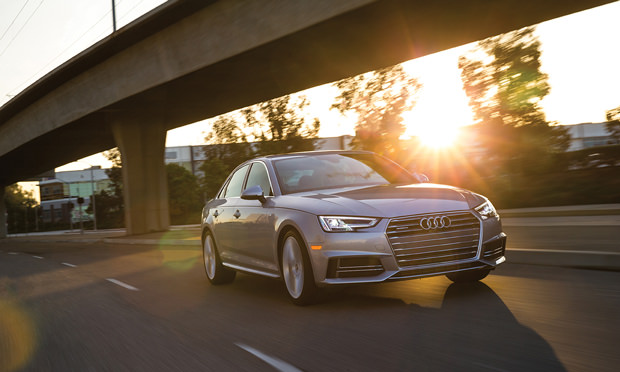 The Audi is the only completely new one of this trio, and while that means that it is capable of feats the others can’t pull off, there are signs it has lost some of the essential charisma of older models.

The A4 has been described as cold, clinical and calculating—but competent, comfortable and convincing are also apt. Characterful isn’t really on the list, though. Partially this results from its boorish exterior styling, which lacks the athletic stance and proportions that are essential to successful minimalism. The A4 is somewhat fussy in detailing and proffers a sense that it will soon grow dated; no wonder the company replaced its head of design during the car’s creation.

The Audi’s interior is more successful, with a rigidly horizontal layout that, while not to everyone’s liking, is über-modern and very well sorted. The optional, high-resolution 12.3-inch virtual instrument display make the BMW and Infiniti—and most everything else—seem so last century, and the semi-autonomous systems operate in the kind of trustworthy, seamless way that lets one actually use them.

The A4 is offered only with a 2-liter turbo of 252hp/273lb-ft, but it runs really hard, with 0-60mph available in just over 5 seconds and excellent real-world efficiency. A twin-turbo six can be had in the S4 model range, but the price jumps substantially. The A4 handles in a predictable if uninspiring manner, but its ride quality is stellar and it is quieter than almost any luxury liner made.

For decades, Infiniti was likened to an Asian BMW, and that seems even more apt in the case of the updated Q50, which does indeed remind us of the best of early 21st Century E46 and E90 Bavarians.

Of the BMW, Audi and Infiniti, the last is the most rewarding to drive hard and fast. Audi has forged its own path. Its European tagline—Progress Through Technology—neatly encapsulates the car Mr. Spock would choose.

The 3-series plots a centrist approach, with better tech than the Infiniti and more driver involvement than the Audi. While a 3-series is no longer the definitive driver’s sedan it once was—the Alfa Romeo Giulia, Cadillac ATS and Jaguar XE all handle better and are more involving—the BMW remains probably the best mix of high tech, practical function and pleasing dynamics that the segment offers.