Is Teeth of the Dog Still the Caribbean’s Best Course?

In his 1994 autobiography Bury Me in a Pot Bunker, Pete Dye tells the amusing story of a New York golfer struggling to find the green at any of the par 3s on Teeth of the Dog—the Ohio-based designer’s masterpiece that opened at Casa de Campo in the Dominican Republic in 1971.

The hapless gentleman was scheduled to be at the resort for three days but, after failing to find the putting surface at any of the short holes, extended his stay. He toiled for nearly a week, playing 36 daily, and eventually hit the dance floor with an ugly, thinned 6-iron at the 141-yard 13th, the course’s only inland par 3.

Doubtless he would have preferred to find the dancefloor at one of the course’s glorious oceanside holes, but with his face reddened and his lips cracked from long exposure to the Caribbean sun, he was satisfied at last. Seeing his ball stop just a few inches short of the back fringe, he picked up his clubs and headed straight for the hotel.

Anyone that’s played Teeth of the Dog can empathize. The trio of waterfront par 3s, which highlight an incredible group of seven ocean holes, are among the most beautiful in the world, and the tee shot that hits the green at any of them, is the shot visitors remember the longest.

I first read about Teeth of the Dog in about 1985 when my father gave his golf-crazed son a book entitled the World Encyclopedia of Golf. Over the next 30 years, I read plenty more about this dream place. One thing bothered me though; the only images you ever saw of the course were of the 5th, 7th, 16th, and occasionally the 8th or 17th—the glorious ocean holes that the resort’s marketing department were obviously keen to promote. I never read anything about the inland holes, and suspected they weren’t up to much.

I discovered the truth last month when I got to play the course that has been ranked the best in the Caribbean ever since it opened. No, the inland holes aren’t as extraordinary or invigorating as their blessed neighbors. How could they be? But they are great Dye holes nonetheless, full of intrigue and drama, quirks and mischief. The only slightly bland stretch begins at the turn and lasts all of three holes—a stretch that only seems unremarkable because of what comes before and after.

When the course opened in the late fall of 1971 it was an instant hit, confirming the enormous talent Dye had shown at Crooked Stick, the Golf Club, and Harbour Town.

The 7,000-acre Casa de Campo boasts three other Dye designs: the Links which winds its way between resort villas and residences to the north of “Teeth,” opened in 1974, and enjoyed a major overhaul a few years ago; the private La Romana CC that opened in 1990; and the spectacular 27-hole Dye Fore whose original 18, opened in 2001, includes the incredible Chavón Nine which sits 300 feet above the Chavón River valley (shuttles will take you the four miles from hotel to Dye Fore clubhouse).

Of course, a prestigious resort of this size can pack a lot of first-class amenities in besides golf and, it almost goes without saying, the dining here is both extremely varied (seven major restaurants at the main hotel area, Altos de Chavón, and the Marina) and incredibly good. 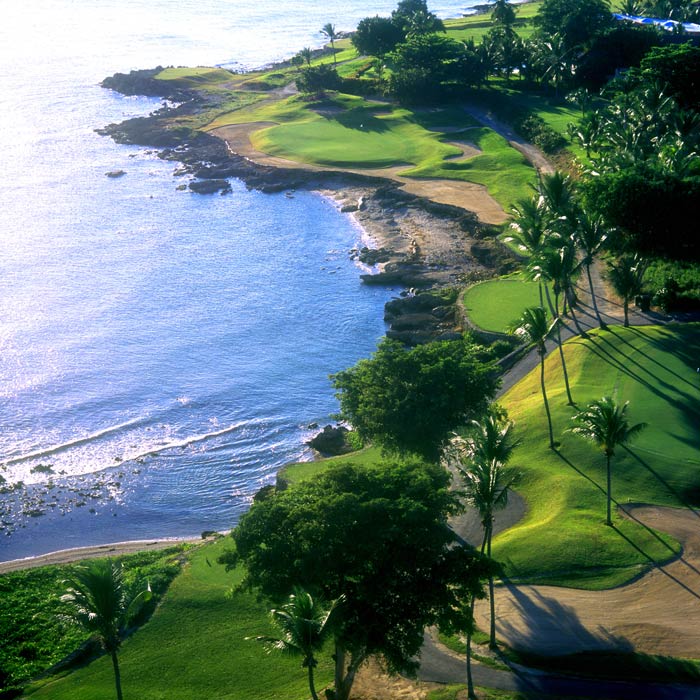 Highlights abound: the food, the beach, the marina, the polo fields, the water sports, the spa, the amazing Tuscan-inspired Altos de Chavón village with its restaurants, shops and 5,000-seat amphitheater where Frank Sinatra, Andrea Bocelli, Placido Domingo, Sergio Mendes, Gloria Estefan, Enrique Iglesias, and many other great singers have performed, your own golf cart for the duration of your stay, and an exquisite hotel that underwent a $40 million renovation in 2010.

But Casa de Campo’s greatest attraction is undoubtedly its Dye-designed golf courses, and the great Teeth of the Dog in particular.

Pete, who just turned 91, and his wife Alice own a villa on the property and still spend six to twelve weeks at Casa de Campo every year. You probably won’t stay that long, but hopefully long enough to find the green at a par 3.

A 7,000-yard par 72 Jack Nicklaus Signature Golf Course, Punta Espada Golf Club is home to a PGA Senior Tour Champion’s Tour stop. Punta Espada is an exclusive championship golf course located inside the Cap Cana Real Estate project. This has 8 holes along the Caribbean ocean and you can see the ocean from all 18 holes.

Designed by Tom Fazio and opened in November 2009, Corales Golf Club can stretch to 7,650 yards. Set along the natural cliffs, bays and coves of the sea, the inland lakes and coralina quarries,  Corales rates among golf’s most exhilarating experiences. Six holes perch along the ocean, and the course culminates at the Devil’s Elbow—a three-hole stretch that climaxes with a dramatic forced carry over the cliff lined Bay of Corales, an inspired capstone to a memorable and breathtaking round of golf.